Is my question considered poor just because it is simple?

It was a very simple question (in terms of complexity): are two things the same or are they not? I provided two links to each of the comparable examples (strictly supportive reference). I suspected that if anybody is going to answer this question they would have been familiar with .Value = .Value and Evaluate function.

I think my question (as I posted it originally) included all context to be a valid question. I didn't think my question was poor in any way. The provided links have samples and explanation of both keywords used in the question. In my opinion somebody over-thought it or tried to make it too complicated with their editing.

After the edit, yes, the question became really poor and I always try to avoid asking one sentence long questions. With no links or other references.

I am trying to understand the negative 6 votes, but I can't. If I came across a question like that I would definitely upvote it as stood but I guess my opinion in this case is totally different than the community's. How do I overcome this?

Update:
Thanks for all your comments and opinions. Again, I have learnt more about how SO works and how other people interpret my questions. I have edited my original question and hopefully made it clearer with the added context. I have sent a vote to reopen the question. Good day everyone

discussion specific-question down-votes
Share
Improve this question
edited May 23 '17 at 12:36

You're right, the edit does appear to have changed the meaning of your question. We allow posts to be collaboratively edited because, overall, it improves the quality of the site. But there's always a risk of something going wrong.

The editor even expresses her reservations in the edit comment, so it wasn't malicious. She was just trying to help improve your question and make it more clear what you were asking, thus making it more likely to receive answers.

Fortunately, we have a system in place to take care of bad edits. It's called rollback, but instead of lowering prices, it reverts back to a previous revision. 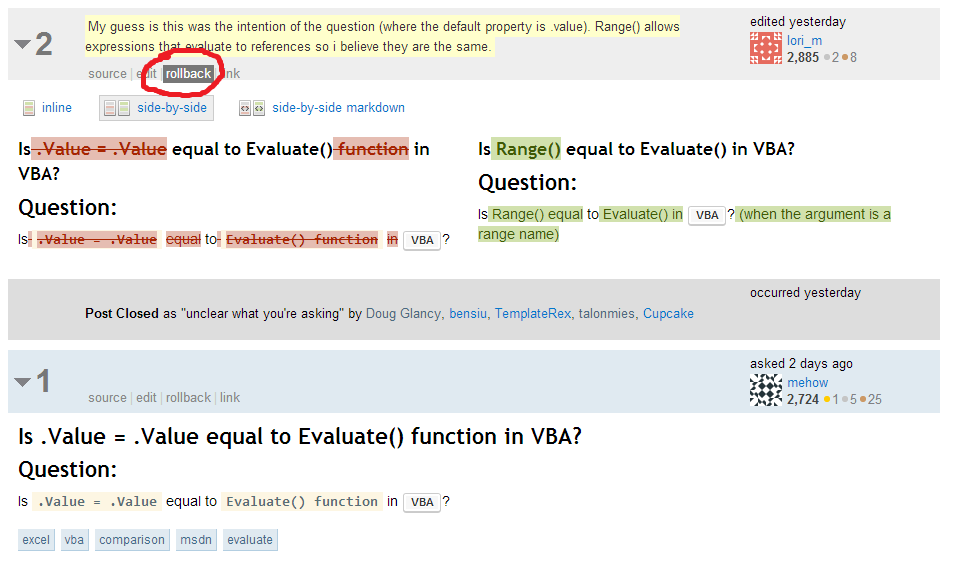 After the edit, yes, the question became really poor and I always try to avoid asking one sentence long questions.

I'm a little confused here… Even if we agree that the edit was poor because it changed the meaning of your question, your original question was still really poor. In fact, it violated your own stated guidelines: it was only a single sentence long!

I am trying to understand the negative 6 votes, but I cant. If I came across a question like that I would definitely upvote it as stood but I guess my opinion in this case is totally different than the community. How do I overcome this?

Cupcake's comment is a good hint: you need to add some context to your questions, explaining the problem that you're trying to solve, what you've already tried, and why it didn't work.

Links don't actually explain things, that's why you're supposed to summarize the contents of the link in your own post. Why should we have to read through two other questions and answers just to be able to understand what you're asking in your own question? Good questions are self-contained.

I suspected that if anybody is going to answer this question they would already have been familiar with .Value = .Value and Evaluate function.

If you start with "I want to make sure a cell always contains an updated value" (i.e. explaining the problem you're trying to solve) and then explain both options you found and what differences you saw between using .Value = .Value and Evaluate(), you give the question somewhat more body, inviting people to read and answer it.

That being said, the edit to your question was grossly inappropriate.

424
What is a 'rollback'?
32
Why should users have to press Return twice to insert new lines?

723
Six simple tips to get Stack Overflow reputation fast
435
Should Stack Exchange in general be awarding “A”s for Effort?
697
Your answer is in another castle: when is an answer not an answer?
361
New three-tiered badge idea: Explainer →Refiner → Illuminator
2440
Firing mods and forced relicensing: is Stack Exchange still interested in cooperating with the community?
2134
Stack Overflow is doing me ongoing harm; it's time to fix it!
319
How can we help Monica Cellio?
949
Firing Community Managers: Stack Exchange is not interested in cooperating with the community, is it?
550
The company’s commitment to rebuilding the relationship with you, our community