This answer came up on my radar. The first thing I noticed about it was its inappropriate use of inline code formatting for something that is not code. Naturally, I tried to edit it: 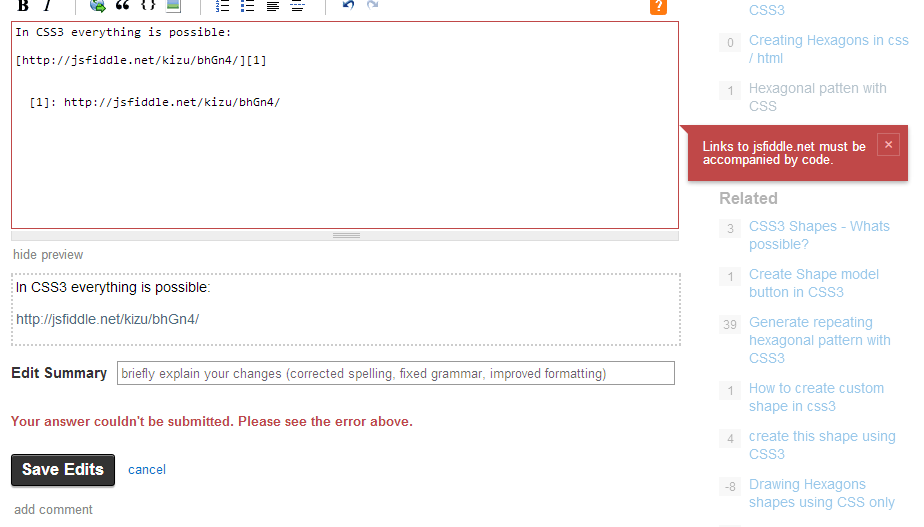 FOILED! Turns out, the answer is actually a link-only answer to an external resource, which we've already decided is unacceptable and should be blocked. Great, I can support that.

But, if we're going to try, it should not be this trivial to beat.

You see, now I don't know if this was just one of those users who doesn't know what code formatting is used for, or if (s)he was using this to work around the smackdown put on link-only answers. If it was the former, they didn't even get a chance to ignore the good advice we're providing!

If you're posting a link to a jsFiddle, you're going to need block-formatted code; inline code simply won't do it. So why don't we check for that? When would inline code ever be enough?

101
Prevent posts with links to jsfiddle and no code
6
Error message about only using Jsfiddle, when code is included inline

101
Prevent posts with links to jsfiddle and no code
8
Do backticks count as code for jsFiddle links?
5
How to moderate questions with only a misformatted link to jsfiddle and no code
27
Is using 'header' markdown okay in answers?
706
Your answer is in another castle: when is an answer not an answer?
180
Please give us an easy way to flag inappropriate ads
579
We're switching to CommonMark
734
New Feature: Table Support