Is it time to be rid of automatic down votes on certain closed questions?

The original reason for this was largely to enforce specific quality bans in part because people were not down voting questions. Now that question down votes are free on questions and it seems to be pretty commonplace for question quality bans to trigger, even without the automatic votes from closure, and we have completely revamped the closure system. Is it time to reevaluate whether or not these automatic votes are still a good idea?

What benefits do the automatic votes provide and have they effectively run their course?

As Brad Larson points out in the other discussion you link, using this for Off Topic closures has become somewhat tricky:

The two close reasons that was applied on before: "Off topic" and "Not a real question" were intended to indicate things that were clearly not suitable for the site. "Too localized" didn't, because many of those questions were decent and appropriate for the site, but too narrow in scope. The off-topic variants now include questions like this, or others that may be OK questions but don't fit here. I'm not sure that downvotes should be applied to those now that they're under the "Off topic" umbrella.

Some OT reasons - on some sites - definitely do imply that a down-vote is warranted, if not several - but this is considerably less true than it was two years ago. And it may be less necessary as well...

Let's face it: this was added for Stack Overflow, which at the time was suffering greatly from an influx of low-quality questions (which hasn't changed) and a seeming unwillingness from the community to use the most obvious form of feedback (voting). A system for blocking low-quality askers had previously been implemented, but without a sufficiently-strong signal (voting) to work off of it wasn't having the desired effect.

This situation has changed fairly dramatically over the past two years. Here's a graph showing the % of closed questions down-voted to a score below 0, as well as that % when excluding the automatic down-votes from Community: 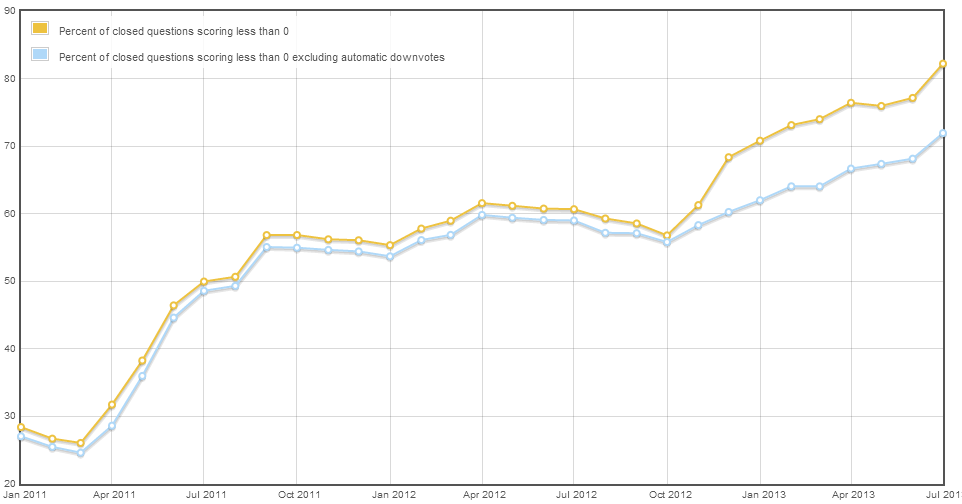 I think it's safe to say that we don't need the automatic vote to help identify problem users anymore. What's harder to say is whether or not the psychological effect of the automatic vote is still having a positive effect on the folks asking these questions... Or the folks reading them.

Still, I think we can afford to remove it at this point, if only to simplify slightly what has become a fairly complicated system. If the trend shown above reverses itself, we can always add it back...

Update: as of August 5th, Jarrod has removed this - automatic downvotes will no longer occur after the next build.

Since this change was made, question score for closed questions has remained fairly stable at around 70-75%. This seems acceptable. 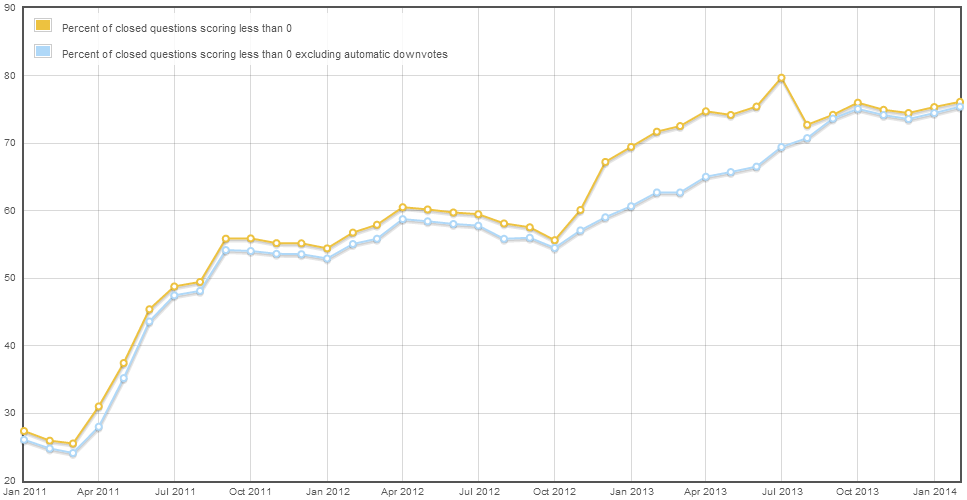 I believe it should be reevaluated - it seems mighty unfriendly for that "on hold" question to also have downvotes; IMO it can disincentivize a new poster from bothering to try to refine their question because it seems like they're being dumped on.

4
What Are the Current "Fault"and "No-Fault" Closes?
803
Recent feature changes to Stack Exchange
77
Should questions closed as "not a real question" and "off topic" get an automatic downvote?
88
"Late Answers" and "First Posts" encouraging unnecessary actions
30
Let's Remove The Auto Downvote On Validated VLQ Flags (On Questions)
62
New Community Review badges
25
Do closed questions automatically get downvoted or not?
29
Revert the Community downvote on a closed question when it gets reopened
-9
Revisiting free downvotes on questions
8
Allow custom close reasons that are not off-topic
See more linked questions

203
Show Total Votes (or Up/Down Votes)
125
Why do you cast downvotes on answers?
319
Enable automatic deletion of old, unanswered, zero-score questions after a year?
188
Every "close" has its thorn: replace "close" with "on hold" for the first five days
331
Stack Overflow is getting a Meta of its own
266
Let's hold language in comments to the same standard as posts
285
An open letter on the state of curation and moderation
584
We're switching to CommonMark