Ask Question
Asked 9 years ago
Modified 9 years ago
Viewed 113 times
0
This question already has answers here:
What is the daily reputation cap and how can I hit it? (2 answers)
How does "Reputation" work? (1 answer)
Closed 9 years ago.

I'm wondering why was my rating increased by +2 after I had received a downvote. Or it's something that is supposed to happen (by rules) when a downvote is received ?

To explain, let's give number to each upvote: 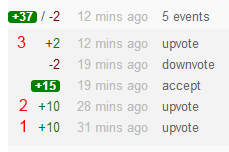 After #1 you had 190 daily reputation from votes only. After #2, you had 200. That's the limit. However, the downvote caused it to be 198, hence upvote #3 gave the maximum it could until the daily limit was hit again, which is only 2. Without that downvote, you would have seen just an empty space instead of reputation gain.

There is a daily limit of +200 reputation that can be earned from upvotes. Earning from anything else (accepted answers, bounties, etc) still add to your reputation. Downvotes go against that cap, so if you get downvoted, then subsequently upvoted, you'll get back that lost reputation.

Not the answer you're looking for? Browse other questions tagged discussion down-votes up-votes daily-reputation-limit .

577
How does "Reputation" work?
109
What is the daily reputation cap and how can I hit it?
4
Was something changed in rep calculation?

1226
Encouraging people to explain downvotes
561
Cancelling upvote on comment?
866
Allow an edit to notify downvoters: "I think I've fixed the issue now - please check"
604
Exit strategies for "chameleon questions"
730
Your answer is in another castle: when is an answer not an answer?
829
Net Neutrality and Stack Overflow / Stack Exchange
2512
Firing mods and forced relicensing: is Stack Exchange still interested in cooperating with the community?
2267
Stack Overflow is doing me ongoing harm; it's time to fix it!
987
Firing Community Managers: Stack Exchange is not interested in cooperating with the community, is it?