Should Rails questions containing Ruby code be tagged with the Ruby tag?

Note: I know this might be taken for a duplicate, but it's really not. I'm not asking how to handle ruby-rails tagging (like has been done many time in here) I'm asking to change the behavior that has began and that have brought to a unique situation in which there are way more rails questions than ruby questions.

My opinion on this, is that we should almost always use ruby when dealing with ruby-on-rails.

The tagging system is described by the help page as:

All questions are tagged with their subject areas.

Now I'd like you to focus on the first phrase: tags = subject of areas. When asking a question about a practical problem (basically a coding problem since theoretical problem are for programmers.SE) on Rails you have always to remember that Rails (Ruby on Rails) is just a Ruby framework and not a language per-se: 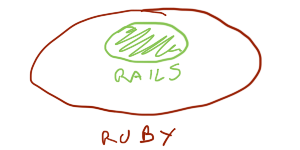 Therefore when facing a RoR (Ruby on Rails) problem you inherently fall into the Ruby area. Or to put it better: Ruby is part of the set of subject areas of the question.

The three category point of view

Now the most important objection made to this opinion is that Ruby questions can be divided into three categories:

which, accordingly to Nakilon have their own set of tags:

Tags are not determined by the kind of experts they are targeting, they are determined by the subjects the question is dealing with. Experts have proper tools to select questions that are suitable for them (like searching for tags, preferred tags and ignored tags).

The most authoritative answer to the tagging topic

A moderator actually answered on this topic (not specifically Ruby-Rails but still) with:

If both tags apply to the question, then use both.

If you're not sure, then use both.

In my personal opinion this whole answers just comes down to:

Tag what you think applies to the question

The most important part is the second one:

which can be applied to our Ruby problem by rephrasing it as:

We early stated that we are referring to code problems (practical code problems) which means there is some code related to ruby-on-rails which means that most likely (with the possible exclusion for Javascript, HTML and SQL or derivates) the code will be in Ruby. How doesn't Ruby code apply to the question then? It does.

basically just states what I said earlier: tags shouldn't target people, they should target subjects (of the question itself).

So should Rails questions containing Ruby code be tagged with ruby?

So should Rails questions containing Ruby code be tagged with ruby?

I mean, I know the entire rest of your question discusses a whole bunch of potential objections to this, and I'll grant that the tagging situation isn't entirely perfect. But the reality is that it works. And pragmatism always trumps navel-gazing, especially for things like this that I do not see as an actual problem.

The tagging system is a very practical thing, designed to get questions in front of people who might be able to answer them. Like you said, we could debate about which arrangement is ideal all day, but that wouldn't do any good for the people who are actually posting these questions. They're the least qualified of all to know whether the issue in their question is related to the specific framework that they're using, or is a more general problem that afflicts all users of the language. And why should they have to?

The standing rule applies here as well: if you see a question that you think is mis-tagged, retag it! That takes care of all the edge cases where an additional tag that was omitted needs to be added, and where an actually unrelated tag was inadvertently added.

I've said most of this before, of course. I haven't found anything to persuade me to change my mind.

If you're a Ruby programmer who absolutely hates Rails, then you can always filter that tag out, since all questions specifically about the Rails framework will also have the ruby-on-rails tag.

Not the answer you're looking for? Browse other questions tagged discussion tags .

11
On guidelines to tagging and avoiding unnecessary tags
7
Do Ruby on Rails questions have to have the tag [ruby]?
5
Clean up questions marked with both Ruby and Ruby On Rails

274
The Help Vampire problem
580
Exit strategies for “chameleon questions”
5
Clean up questions marked with both Ruby and Ruby On Rails
700
Your answer is in another castle: when is an answer not an answer?
826
Net Neutrality and Stack Overflow / Stack Exchange
2445
Firing mods and forced relicensing: is Stack Exchange still interested in cooperating with the community?
2142
Stack Overflow is doing me ongoing harm; it's time to fix it!