'code that is not properly formatted as code' false positive?

I'm trying to post this question to SO, but it keeps complaining that it

contains code that is not properly formatted as code

and I can't figure out why. Am I missing something, or is there a bug in the code-detection heuristic?

I've tried wrapping suspect phrases in inline code blocks with backticks, but to no avail. My question's source is:

The problem is with the Markdown image link

The named reference-link seems to be the culprit. If I change it to a number, it passes the test:

This does seem to be a bug in the SO code-detection parser, where it incorrectly identifies image reference-links that use a string instead of a number as code.

@JDS Me too. The problem was also with the Markdown image link. I fixed the error below by simple deleting a link:

"Your post appears to contain code that is not properly formatted as code. Please indent all code by 4 spaces using the code toolbar button or the CTRL+K keyboard shortcut. For more editing help, click the [?] toolbar icon."

^- Above is the same article with only one link (Images.xml). not two links as before (ImagesMinimal.xml and Images.xml).

With this posting has worked here: How to fix Shopware images import error - Ordernumber and image are required

Here you could see the error again (red box): 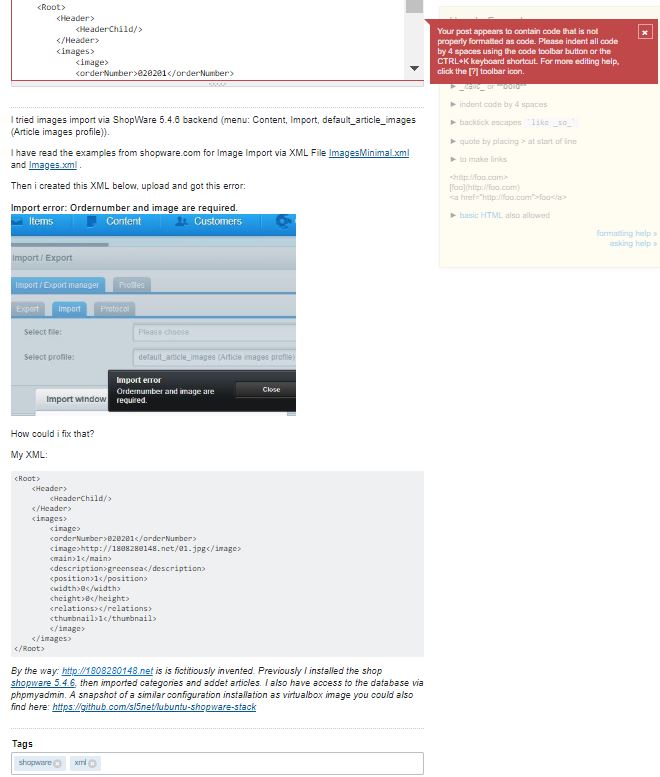 Not the answer you're looking for? Browse other questions tagged bug markdown code-formatting .

13
Code formatting error message dispenses no-longer-true advice, and doesn't indicate what to do in case of false positives