Users without commenting privilege can't select the "it doesn't belong here" flag reason; a "404" error box appears when they try

I attempted to flag this question on Christianity.SE... 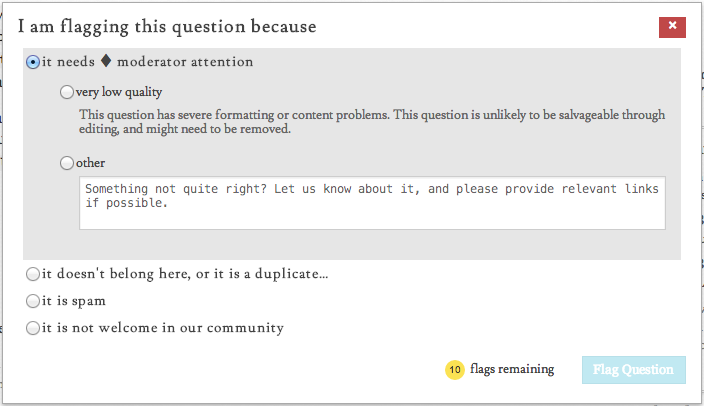 ...as "off topic". Although the initial flag dialog loads correctly, every time I selected the "it doesn't belong here, or is a duplicate" option, the next pane would fail to load:

The account had 46 reputation. I tested this on other sites, but found that it only occurred on Christianity.SE. This was my only account that has the for the flagging privilege but not enough for the comment privilege.

I have now earned the commenting privilege on Christianity and am no longer able to reproduce this error, confirming its cause.

Jarrod fixed this - if a flag type requires commenting privileges (as off-topic flags do) and the user doesn't have them, that flag type will not come up.

This is currently live.

Not the answer you're looking for? Browse other questions tagged bug status-completed flags privileges .

15
404 error during flagging a question
2
Unable to flag my own question [can't delete as already answered]
2
Why does the flag box say "404" when I use it?
0
Getting 404 error when trying to flag question or answer
142
Stack Overflow returning HTTP error code 418 (I'm a teapot)?
18
Why don't I see the option to mark a question as a duplicate?
7
Getting "404" when selecting "close" on deleted question

4
Why is the flag option "it doesn't belong here" missing?
2
How many times per day can users flag questions as "it doesn't belong here"?
17
Please tell me how many characters I have left in the comment flagging dialog
19
Unregistered user can delete his account, even when having upvoted questions or answers
70
Make Stack Exchange sites compatible to OS X Lion full screen mode
7
Getting "404" when selecting "close" on deleted question
8
Why do I get "Users without post commenting privilege can't edit auto-generated comments" when trying to edit my non-auto-generated comment?