The counter for the Copy Editor badge progress is off by double digits in my profile. As you can see, I've had 100 edit suggestions accepted, but the progress counter shows 75:

Also, you can see yet a third count in my activity section: 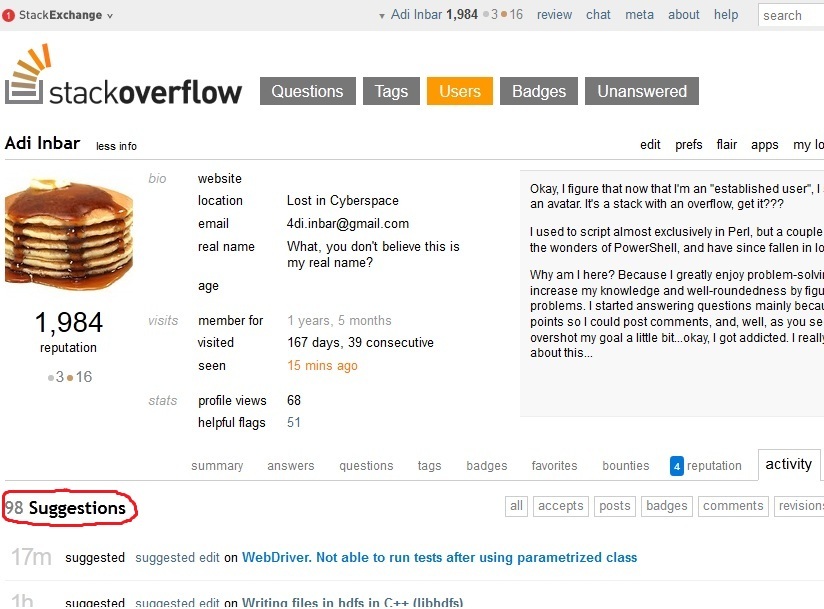 I actually noticed the discrepancy a while back, but I was curious the badges would end up being based on the real count or the incorrect count in the progress stats, so I decided to wait until I reached 80 before posting on meta. When I reached 80, I realized that the badge progress counter is decremented when a post you've edited is removed, so I waited until I was over 80 not including removed posts. Then I waited until I was well above that threshold, just to be sure.

Based on the rep reversals in my profile, only 9 of the 100 posts I've edited have been removed. The 98 in the activity log makes sense, because I've seen that those entries go away when the post they refer to is deleted, so the number is the total number of edits (accepted and rejected) minus the number removed. There's one extra (100 approved + 6 rejected - 9 removed = 97, but the activity section's counter shows 98), but I'm sure there's a simple and logical explanation.

However, I can't explain why the badge progress counter only shows 75 when I have 91 accepted edits that haven't been removed. I'm not sure how rollbacks affect the count, but I find it unlikely that more than 16 of my edits have been rolled back. I'm not aware of any except one that I rolled back myself after realizing it was a mistake, even though it was approved.

Also, as of this writing I don't have the Strunk & White badge, even though I passed 80 in the number of approved edits minus the number removed about a week ago. So, it appears that the badges are based on the same query that produces the flawed badge progress counter.

[I edited the title to make it clear to the tomato-throwers that this was intended as a "I noticed a discrepancy, why don't the numbers add up?" question, not a "Hey, no fair, where's my badge??" question. The discrepancy was explained in the accepted answer.]

There are multiple things that can cause discrepancies between these counts.

Also note that the total number of suggestions in your activity would include those that have been rejected, or are even still pending.

The badge progress indicator is correct. That is your badge progress. However, I can't tell you exactly which edits, etc are not counting towards it because that's a lot of effort just to prove that something we know works correctly is actually working correctly.

Not the answer you're looking for? Browse other questions tagged bug status-bydesign badges edit-badges badge-progress .