One of the things I find really annoying about Stack Overflow is that many users will post useless comments and others will upvote them. If someone doesn't think you did do your homework, then they have the right to flag a post as such, but they should not be allowed to post poor comments.

There should be a "flag as unconstructive" next to comments (and not just solutions posted). If some people are constantly in the habit of posting useless comments, penalties should be taken like locking them out of Stack Overflow for a few days. Then maybe they would think twice about making such comments. Just have a look at the comments on this post for example:

People on Stack Overflow shouldn't be able to get away with this. If they don't like a post, they should either ignore it or flag it under some category.

You can already do this. 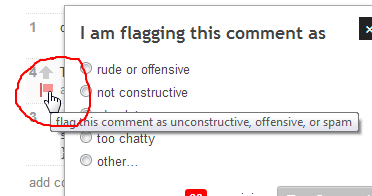 However, none of the comments there really deserve to be flagged (see the bottom of this answer). You should always research your problem and post what you have tried in your questions. Please read: How to Ask

As Doorknob points out, there already is a mechanism for flagging rude or unconstructive comments. In fact, a couple of comments on that question were indeed flagged and deleted by a moderator:

I found a lot of dorks posting comments like Neal.

How shocking that there are so many arrogant people like you who waste time posting comments!

These were both insulting to others, and were removed as a result. The user responsible was warned about this, which is our standard procedure. If there is a more persistent issue, or if the comments were very far over the line, we can temporarily suspend an account to give someone a little time to cool off.

I'm guessing you probably wouldn't have wanted for the system to automatically suspend the account of the person behind those comments in response to these flags.

Not the answer you're looking for? Browse other questions tagged feature-request comment-flags .

162
How does comment voting and flagging work?
41
What are valid reasons for flagging comments?

380
Add a way for moderators to cast a normal, non binding close/open vote
494
Implement ```-style (fenced) Markdown code blocks
67
Make comment flagging work more like chat flagging, available to users with 10k reputation
183
Can we get a comments only lock?
385
Add an “I don't understand” option for review audits
177
Shouldn't “off-topic” be only about… off-topic?
151
A guide to moderating comments
273
Make moderator messages anonymous
260
Let's hold language in comments to the same standard as posts