The Many Memes of Meta

Catchphrases and concepts that spread from person to person are known as memes, which, courtesy the Internet, can now explode across the Earth like a highly contagious virus (hence "going viral"). As with their real-life counterparts, some infectious diseases are global (pandemic), while others are endemic to specific regions.

Stack Overflow, and now even more predominantly Meta Stack Exchange, have seen more than their fair share of these pathological social constructs spread through the user base. They are now ingrained units of our collective culture as SOpedians (a term which I hate, by the way).

Just as travelers' immune systems can be assaulted by new diseases in new places, new users are increasingly likely to be miffed by an ingrained meme and left sitting scratching their heads. I therefore propose that this space be used to document the memes endemic to Stack Exchange's culture.

Each meme should be listed in a separate answer and I hope that we as a community will be able to provide greater context to each one.

Please actually explain each meme in a way understandable to those not already in the know. Especially considering that a lot of these memes aren't really understandable to newer users who weren't around in the early years of the network, or are based on system features that no longer exist.

On other Stack Exchange sites

Background: First mentioned in a bug report about a TODO comment showing up on question pages, this was labeled a “part of [the staffs’] new tradition here at Stack Overflow”. The original refers to it as “Whoops Wednesday”, but in later mentions, it’s usually called “Whoopsie Wednesday” because it rolls off the tongue more easily.

Essentially, it’s a silly bug, a blunder, a whoopsie that happened to occur on a Wednesday. The whimsical alliteration makes the phrase memorable.

Cultural Height: It's larger in need than it appears.

Background: Visual Basic 6.0 wasn't too fussy about strict typing. You could add integers to strings and usually get the result you wanted. And vice-versa. Usually. VB.NET promised to change that and let you get predictable results from your code. As in, the prediction you made, and not what the compiler felt like doing. But that promise is Optional, and not Strictly On as the default.

Corollary: If your code does not compile after setting Option Strict On, it was faulty anyway.

Caveat: Without hours of delving through imprecise documentation, some things can only be found out at run-time. The increase in entropy of the universe for allowing run-time determination of types may be less than the entropy increase resulting from figuring out how to strongly-type something.

Usage: If someone asks a VB.NET question, look for something like TextBox1.Text = x + 5. Found it? Yes! Add a comment like "You should use Option Strict On to point out some problems in your code." Your work is done.

Background: Zalgo text wasn't widely known on Stack Overflow before bobince got tired answering all the RegEx with HTML questions. There are also other references to the Zalgo text like How does Zalgo text work? and Zalgo in user names and effects on comments rendering.

Background: After a question was asked suggesting that Stack Overflow modify their logo for holidays and events, sixlettervariables suggested that an imagined response from users might be: "Omigerd you left out Important Day X you insensitive clods!"

Background: Used in various meta posts often in conjunction with "fun", whatever that is. Often used to add levity to an otherwise dull post (similar to Burninate requests being "witty").

This meme comes directly from South Park‘s season 2, episode 17 (30th in total) which aired on December 16th, 1998. In this particular episode, the children’s underwear are being stolen from them by gnomes for the purpose of “profit.”
The process, as explained by thee gnomes goes something like this.
Step 1. Collect underpants.
Step 2. ?
Step 3. PROFIT

Origin: Antiquity (or 2002, if irobot.com is to be believed)

Cultural Height: Fears of premature deletion in March 2013 (this and this). Still discussed regularly on meta. A comment on this question by Sebastian Simon prompted this entry.

Background: A Roomba is an automatic robotic vacuum cleaner for cleaning floors. The Stack Exchange auto-deletion script automatically deletes inactive posts that meet certain criteria and has thus become known as the Roomba. The implication is that sometimes users will find posts have been deleted while they have been away, much like a Roomba might clean a house.

Cultural Height: Every time this command is being issued in Charcoal HQ or Tavern on the Meta or another chat room

Background: SmokeDetector is a community-made chat bot that monitors new posts on the Stack Exchange network and filters out spam. It has a lot of commands that people can issue, among which are ones for joking or entertainment purposes, and !!/blame is one of the most popular joke commands. Whenever someone issues this command in a chat room that Smokey resides in, it will respond with

where [someone] will be a randomly chosen user that happens to be in the room at the moment (this includes SmokeDetector itself). It has since been a popular entertainment, and people star Smokey's response when it happens to blame an interesting user.

Usage: Drop into Charcoal HQ or Tavern on the Meta and post a message of !!/blame, then watch SmokeDetector's response.

Background: It started when @Aurora0001 was automatically added as room owner of the IoT main chat room. He started out his career saying,

Say hello to your benevolent dictator of Internet of Things chat!

All hail to Aurora, first of his name, protector of the realm.

His message received exactly two stars, and from there it simply escalated, to the point where Ghanima posted,

By some odd chance, the message failed to be starred, but the title has stuck. Only anonymous2's and Helmar's mod hammers (🔨) can keep him in check.

Cultural height: As tall as the wizardry tower goes

Background: Shadow Wizard is one of the most prolific users here on Meta. While their name previously didn't hold that much significance, after another prolific Meta user, Sonic, also adopted the word "Wizard" as part of their username (per their normal cycle of changing usernames), there began a trend where many other active Meta users adopted it as part of their usernames.

After the Ask a Question Wizard rolled out on Stack Overflow, more Meta users also adopted the word "Wizard" into their usernames.

Originator: That Evil Chatroom that Organises Votes (aka, the SOCVR Chat)

Background: Boom (or 'Booming') originated from the SOCVR chat-room, as a reply to someone requesting the closure of a question (primarily by using "cv-pls" [or "cv-plz", for the weak-minded]), that the question is now closed (or dealt with).

Cultural Height: Every time a blog post is posted and shared in Tavern by Feeds.

Background: At some point, oneboxing of blog posts started to break randomly. Andrew started replying to almost every Feeds message with a funny reply. (list)
Others joined the fray, but he stays the most loyal.

Background: Some random guy typed up a page-long rant with copious amounts of allcaps and calling people "neckbeards," which is apparently (slang) A nerd; a dweeb., although in the context he used it nobody is entirely sure what it means.

Cultural Height: Every time a StackExchange™ "Feature" Report™ comes up

Background: Starting with Stack Exchange™ MultiCollider SuperDropdown™, there has been a culture of naming Wacky Features™ of Stack Exchange (i.e. design bugs) as trademarks. Examples:

A variation of this meme is to use the name ".... Overflow™" (referring to Stack Overflow): 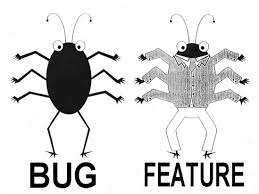 Originator: The image already existed as a general Internet Meme, it was used first on a scared question by voyager.

Cultural Height: It pops up every now and then.

Background: Whenever somebody suggests making comments mandatory with downvotes, a common argument against it is that people will just comment “gjlhglhfh” or some other random combination of characters to explain their downvote.

Cultural Height: As long as there is drama somewhere

Background: Chat meme. Whenever a drama is about to begin, or is ongoing, anyone can grab some popcorn and watch the drama folding before their eyes.

188
What is the boat programming meme about?
74
Is there a joke about "Freehand Circles" that I'm oblivious to?
37
Why do unicorn-related posts have so many upvotes?
23
Always Friday in Iceland?
7
Jon Skeet sometimes goes by the alias "Tony the Pony" - but why the reference to ponies?
-10
Do some Stack Exchange sites really allow joke answers?
10
Why there are so many unicorns among top-level SO users?
8
Can someone let me in on the 6-8 weeks joke?
-3
Where's that three weeks for any deadline page? It had a jQuery slider on it
366
Jon Skeet Facts
See more linked questions

365
Database schema documentation for the public data dump and SEDE
512
How does deleting work? What can cause a post to be deleted, and what does that actually mean? What are the criteria for deletion?
768
Which tools and technologies are used to build the Stack Exchange Network?
604
How does the bounty system work?
487
Is cross-posting a question on multiple Stack Exchange sites permitted if the question is on-topic for each site?
1900
What is the XY problem?
831
What are the badges I can earn on each site, and what are the exact criteria for earning each badge?
680
What is the association bonus, and how does it work?
326
The Complete Rate-Limiting Guide
992
Firing Community Managers: Stack Exchange is not interested in cooperating with the community, is it?