After adding a comment, SO says there are new comments to show, but it is only yours? [duplicate]

SO didn't used to get confused about that. Please fix it so it is unconfused once more.

Specific context: I have designed a sorting algorithm for a linked list.

I set out to reproduce it — the site recognized that it was under scrutiny and refused to cooperate.

The problem seems to be intermittent, or to depend on the sequence of actions you undertake. But I've noticed it on and off for most of this week. I don't think it depends on having a lot of comments; I've seen it with a couple of comments in the question. I'm not sure whether it is restricted to comments to the question; I think it can occur with comments to an answer too.

Question: segfault during write to the realloc'd area

When the question is first loaded there are a number of hidden comments (now 10, was 9 when I started):

When I added a comment, it said there were 8 more to show:

When I tried to show the '8 more comments', they weren't there:

After reloading and redisplaying, the comments available were: 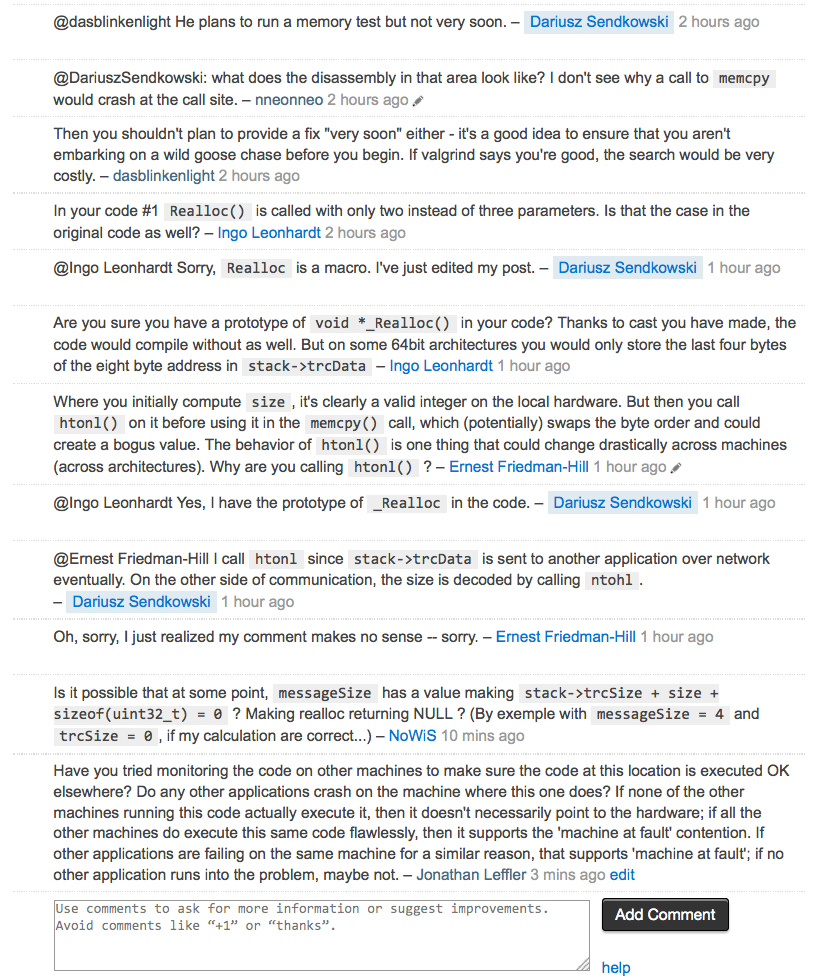 Strictly speaking, the images were generated in the order 2nd ('8 more'), 3rd ('not 8 more'), 1st ('10 more'), and 4th ('look at them all'). I've not tried adding yet another comment. But this bug is still active a week or more after I reported it, and a month or more after it was first reported.

bug stack-overflow comments
share|improve this question
edited May 23 '17 at 12:36

1108
Encouraging people to explain downvotes
146
Make recent activity and responses show new comments on questions/answers I have commented on (even if I don't own them)
198
What's with all the rude comments recently?
307
Don't remove the @ part of my comment
123
Please make the multiple comment timer less annoying (non-resetting etc.)
182
Can we get a comments only lock?
155
“What have you tried” epidemic
319
Stack Overflow is getting a Meta of its own
301
Why do I need 50 reputation to comment? What can I do instead?
258
Let's hold language in comments to the same standard as posts