We have a potentially clever user in the ways of unicode or javascript user name validation (and certainly very knowledgable in general) that managed to get what is effectively a null user name from the normal process to change user names in their account management tools:

The validation for Zero Width Joiners and other odd Unicode characters might need tweaking or implementing on user page edit validation.

Asking users one by one to change their name won't scale well if this is a bug in the validation code.

Here's what I see in comments about the lack of a linkable name: 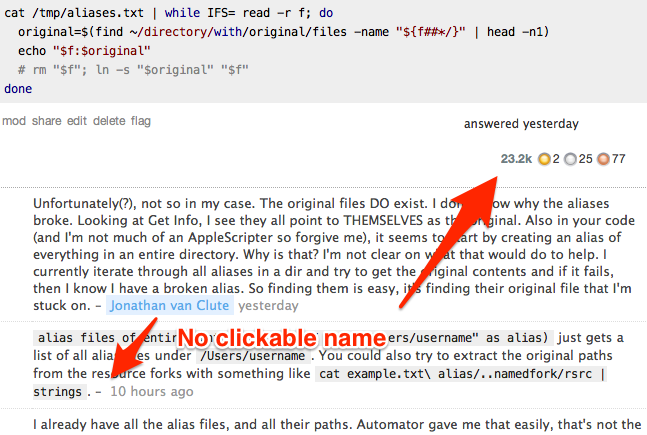 Tearing into the rendering of the page, what would look like this for a user with a more traditional name:

The user with the brief unicode name:

Is this a bug in the user entry validation checks or the rendering of this particular name as it sits in the database or do I need to be equally clever to @ message users with names like this one on the site?

Since the cat is out of the bag so to speak, here's the remedy I would propose - extend the validation that should be in place for other input to the user editable fields:

I don't see a reason to suppress unicode in general, just have a sanity check that a name isn't exclusively oddball characters that break other functionality (like a working @ reply).

Additionally, you could add a second check to ensure that no div class="user-details" gets a null href rendered for the target of the user link. So

If the text placed in for "reply to the author of this post" is functional, who cares what name is rendered elsewhere. This second code change might be good to have down the road in case the validator becomes broken for certain characters or a regression test doesn't catch other oddities from unicode.

Not the answer you're looking for? Browse other questions tagged bug profile-page user-accounts .

36
Comments, questions and answers don't trim Unicode U200B when counting characters
19
Getting the body of a question, or answer, through API
57
Why are usernames allowed to be composed entirely of non-visible Unicode characters?
1
Why can't I see the profile of this user?