On SO when you click "ask a question", the subject "placeholder/overlay" is:

What's your programming question? Be specific

How about having something on the question textarea too? It must be simple, or the type of people this is mostly aimed at wont read it.

I suggest in the question textarea the "placeholder/overlay" be something like:

To get a good answer, remember to provide (where applicable):
Clear explanation of your exact issue;
What you've tried, what happened;
What you want to happen;
Any relevant code;

In PHP/MYSQL/HTML I often see questions without basic info. No code, not clear what they're asking, no indication they've tried anything, etc.
Not sure about other tags, I'm sure it'll be a similar case - it never hurts to remind people anyway.

Some people will always post what they want, regardless, but reminders/prompts in the question textarea before they type might help enough to warrant it being implemented.

At the minimum it could potentially catch the forgetful, and those who are tired/busy/unaware we need certain info to help/etc.

Even prompting only a few people now and then to provide one more thing that they otherwise wouldn't have is another comment someone doesn't have to post asking for info, which in turn allows more time on something constructive, and would reduce frustration from seeing it happen regularly.

As well as making answering easier, it also helps questioners by likely getting their questions answered quicker. Some people will not bother with a bad question at all, not even commenting or coming back later, so the questioner loses that one view, + all others who think like this.

A good question is also more likely to obtain a concise answer.

EDIT to add a slightly revised proposed message for the placeholder (just food for thought, I'm sure there's better ideas waiting to be suggested):

Good questions get decent answers, and quickly.
Poor questions and duplicates get downvotes and slow or no answers.

Good questions require a minimum of:
Clear explanation of your exact issue;
What you've tried, what happened;
What you want to happen;
Any relevant code;

Is there room for improvement here? I think the simplest form of improvement would be to add a placeholder to the textarea. This way as the user is hastily moving from title to question at least they might see and read some tips since the placeholder will be the main focus of the page at that point.

Add this attribute to the <textarea> element

This text was taken from the sidebar and from https://stackoverflow.com/questions/how-to-ask. It will look like this

The status quo is that there is no placeholder text inside of the textarea. There is a section to the right of the text area which shows 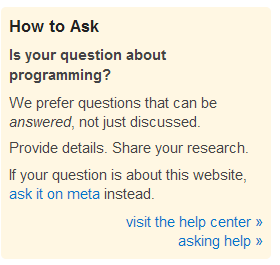 However, this easily blends in with the side of the page, and if the OP is only looking at input fields which is where their attention is then they will completely miss it. Moreover, upon mouseing into and clicking (or tabbing) the question textarea, the "How to Ask" is replaced with 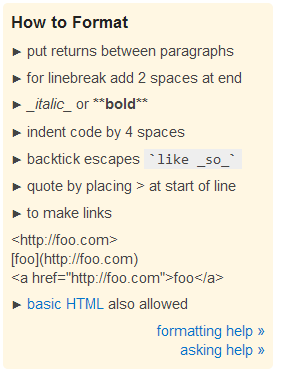 "How to format", and that is all the user sees for the remainder of writing their question. I did not realize there was a formatting epidemic on stackoverflow.

69
How to save the world… One question title at a time
-9
Would it be possible to have a Question Template for new users?

262
“You have gained power. Here's how to use it.” kind of message
95
Discourage questions being marked as answered within an hour or so of being posted
84
auto-detect the phrase “it doesn't work” and ask user if enough info given
150
Tell the user who will be notified of a comment
182
Don't lock votes on Meta sites
289
Build and strengthen the Stack Exchange community with “crossover questions” between sites
77
Add a moderator template for a pattern of bad answers
117
Pre-fill question-box with text for new users (A/B study proposal)
132
Can we show new/anonymous users more Q&A?
179
Please give us an easy way to flag inappropriate ads