How is it possible that a single user who is not a moderator can delete a comment?

On Drupal Answers, while taking care of some comment flags, I noticed that a comment written on March, 2012 is reported to be deleted by a single user today.

How is it possible that a single user can delete a comment left by somebody else?

The comments that result deleted from a single user are two. This is what they contained. (I report the part that is relevant as for the "comments about accept rate are deleted after a single user flags them.")

It'd be good to accept the answers to your previous questions, you currently have a 0% accept rate […].

Thanks for that it's much appreciated by the community...I don't think you've actually accepted the answer though! You've voted 3 of them up, which is great, but accepting works slightly differently. There's a little outline of a tick to the left of each of the answers...If you click that it'll turn green and you will have accepted the answer as the correct one. […]

From the page listing all the flags, I get the following. 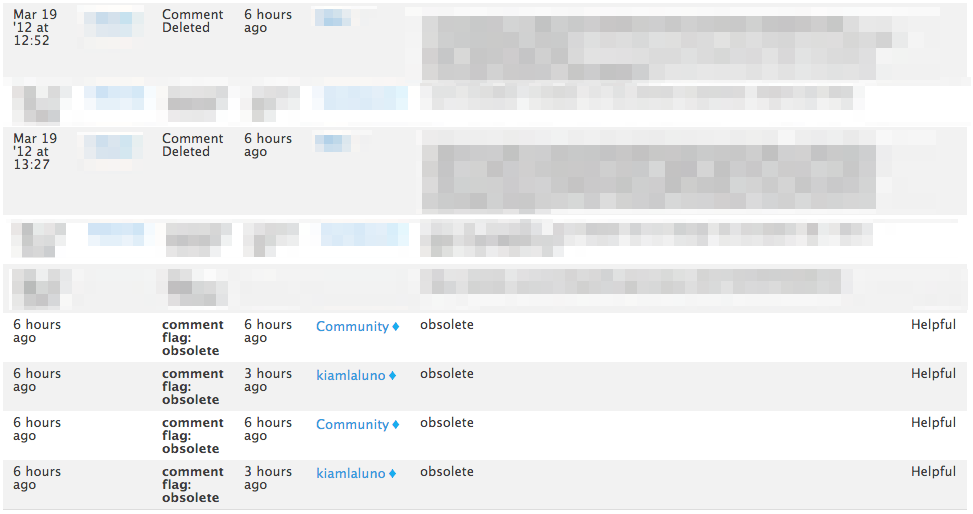 There are two comment flags for obsolete comments that result handled by the Community user. (Truly, the Community user is reported to be the deletion user.) The "6 hours ago" reported for the "Comment Deleted" line and the "comment flag: obsolete" line match perfectly. (That is, the timestamp is "2013-09-10 06:08:01Z" for both the lines.)

From the small snippet of the comment, I surmise Clive is talking about someone's accept rate there.

Comments can be flagged for moderator attention, but if enough flags accumulate, the last flag to tip the balance causes the comment to be deleted. For certain types of comment, the threshold is lowered; accept rate comments have a really low threshold: only one flag is needed.

My guess is that the user simply flagged that comment, and his flag crossed that low threshold for comment deletion, and his name was attached to the deletion entry in the database.

I don't know the exact criteria by which a comment is seen as an accept-rate flaggable-offense. 'accept' is one keyword, 'accepted' is not, but it looks as if 'accepting' is listed as flaggable.

Not the answer you're looking for? Browse other questions tagged support comments accept-rate deleted-comments .

45
What is the SE version of Seven Dirty Words?
54
Allow moderators to undelete the comments deleted after being flagged by a single user
11
Are comments which respond to another comment deleted by single flag?
13
Flags against "improve your accept rate" comments are failing
13
Can't undelete a comment which was automatically deleted by Community
3
Single Flag deletes comment with profanity
4
Removing a revision from a question causes the tags and the title to be removed

626
Formatting Sandbox
800
Recent feature changes to Stack Exchange
153
Tell the user who will be notified of a comment
294
Let's stop displaying a user's accept rate
236
Replace accept rate with citizenship level
154
New phenomenon: Rage Unaccepting
54
Allow moderators to undelete the comments deleted after being flagged by a single user
93
Community deletion of comments should raise a moderator flag
985
Firing Community Managers: Stack Exchange is not interested in cooperating with the community, is it?