Inconvenience and complexity: I noticed a new flag menu today and I instantly realized something annoying: It now requires 5 clicks for my most common flags because I have to go 3 levels deep into the flag menu.

Why is it so much work to flag very, very common flag types? ("describe the specific problem — and include valid code" and "demonstrate a minimal understanding of the problem being solved") Follow the red arrows to the Off-Topic menu in my figure below.

Bad options and far too many options: Another point, from a usability perspective the menu choices are horrible and there are too many choices that extend too many levels. It is only because I have experience with the flags to know what each flag type actually means.

It definitely won't be attracting users who are unfamiliar with flagging to start doing so. The number of different types is overwhelming and it isn't obvious what question you will be asked after making a choice from the first set of options. For example, there is both a "It should be closed for another reason..." and a "other". Those mean the same thing! It is only after performing a exhaustive search that a user would know what "other" actually means.

There are duplicate Duplicate options: Duplicate is listed twice (see the two blue arrows in my figure). Once at the top level and again in a second level menu. The problem with this is that the top level choice jumps me down to a third level menu so going back one level does not take me to where I would expect (see the green circle in my figure). This is bad usability. 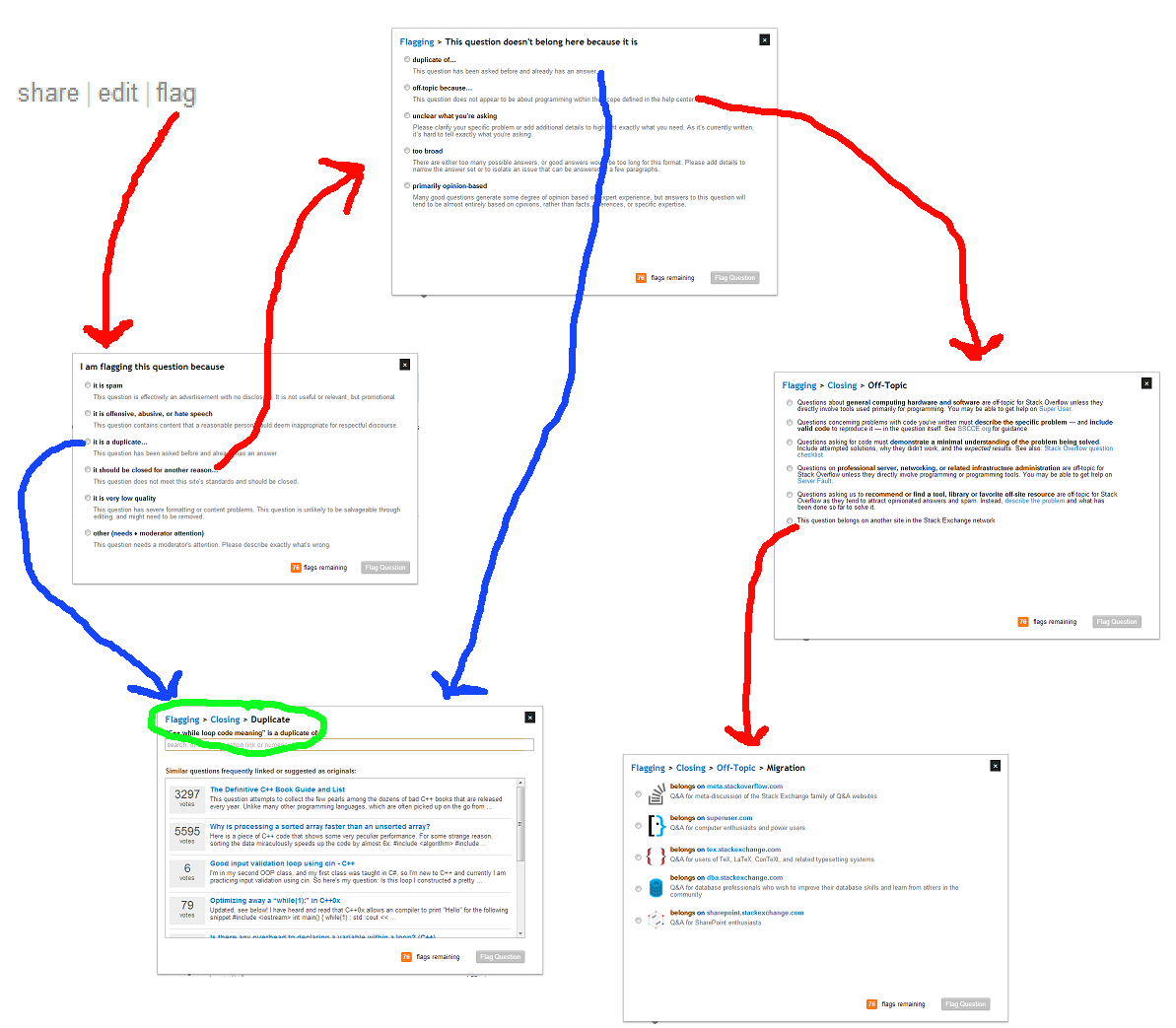 I think this Spaghetti Menu (along with the less recent changes) are a major step backwards. Thoughts?

First off, you're absolutely right that there are entirely too many options when flagging questions. The intent is to put the most useful ones at the top, but still... There can be a lot to read there. Fortunately, it's somewhat context-sensitive, so most users won't see the full list of flags most of the time.

Beyond that, your workflow indicates you're somewhat fixated on closing as the primary avenue for flagging. Don't get me wrong - closing is important. But I tend to think you need at least a little bit of time on the site to get to the point where you can be - or should be - doing a lot of close-flagging, and during this time it's probably worth slowing you down and encouraging you to pay a bit more attention; remember, these are made accessible via the flag dialog as a form of training wheels for closers - at some point, you're supposed to graduate to a real bike vote.

That said, one of the most difficult areas on the site is the identification of duplicates, so we did make this a bit easier: flagging a question as a duplicate is now 3 clicks instead of four, including the bit where you click the button.

Flagging as spam and offensive are also emphasized now, as they're super-helpful in getting rid of trash on the sites.

Finally, while the distinction between "close" and "other" may be irrelevant if your only goal is to close things, there are a lot of other problems that occur to folks new to the sites - particularly those unfamiliar with this whole "closing" notion - and offering them a quick path to express those concerns is important.

Not the answer you're looking for? Browse other questions tagged discussion flags user-interface .

1407
Fastest Gun in the West Problem
1667
What is the XY problem?
191
Allow moderators to reply to a flag
653
Your answer is in another castle: when is an answer not an answer?
341
New UI encourages askers to confirm or dispute duplicate votes
404
Can a machine be taught to flag spam automatically?
824
Net Neutrality and Stack Overflow / Stack Exchange
1973
Stack Overflow is doing me ongoing harm; it's time to fix it!