Flurry of downvotes. Others too? Curious why [duplicate]

It almost looks as if someone is playing police: 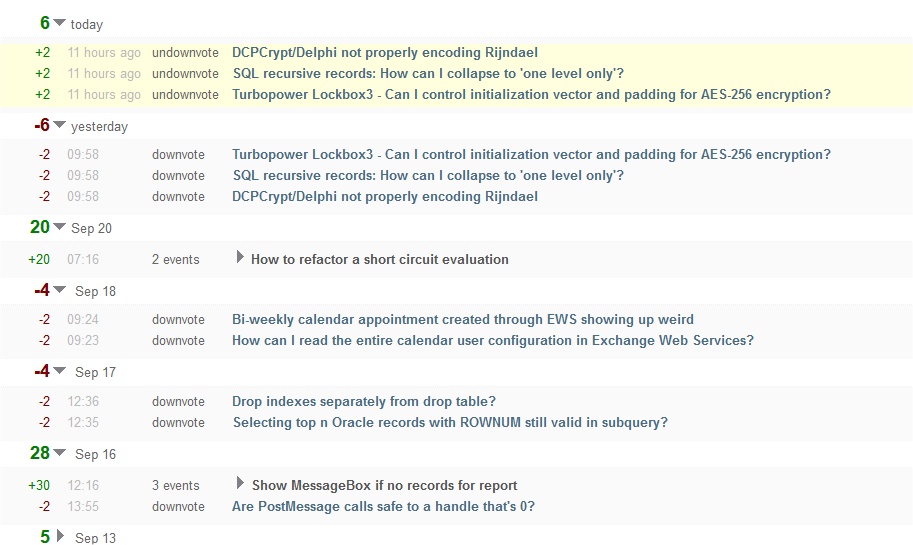 The downvotes are on:
DCPCrypt/Delphi not properly encoding Rijndael
SQL recursive records: How can I collapse to 'one level only'?
Turbopower Lockbox3 - Can I control initialization vector and padding for AES-256 encryption?
Bi-weekly calendar appointment created through EWS showing up weird
How can I read the entire calendar user configuration in Exchange Web Services?
Drop indexes separately from drop table?
Selecting top n Oracle records with ROWNUM still valid in subquery?
Are PostMessage calls safe to a handle that's 0?

If there's anything common among these downvoted questions it could be questions that I have not accepted and/or that were maybe were not good ideas to start with - but hey, that's part of why we ask questions ;-)

Has anyone else noticed this behaviour (at least one person has, see the undownvotes).
It does not look as if someone has taken offence at something I did, there would be more downvotes then.
I'm curious what can be going on, but I'm afraid there's not much I can find out at my level.

For assorted reasons people may start voting (either up or down) for a person rather than for content. If this has happened to you then automatic scripts run every night which reverse this; see what-is-serial-voting-and-how-does-it-affect-me. In your case it's a bit close to call as to whether this definitely is serial voting. If they are all from the same user, the script will know and may reverse them (the exact algorithm is deliberately vague).

Undownvoted on the other hand simply means someone has removed their own downvote; perhaps you improved your post or they simply had a change of heart. See is-undownvote-really-the-right-word.

There may however be a bug in which serial downvote reversal is incorrectly marked as undownvote.

Not the answer you're looking for? Browse other questions tagged discussion down-votes serial-voting .

573
What is serial voting and how does it affect me?
178
What can I do if I'm the victim of serial downvoting?
12
Is “undownvote” really the right word?
17
Serial downvote reversals don't always appear as such

1120
Encouraging people to explain downvotes
120
Why do you cast downvotes on answers?
219
Should the weight of downvotes be increased?
885
Why aren't people voting for questions?
288
Why do you lose reputation for downvoting?
129
Should downvotes on questions be “free”?
44
I can see others' rep change from removed downvotes
256
Closing changes: [on hold], unclear, too broad, opinion-based, off-topic reasons, bye-bye to Too Localized
402
Why taking responsibility for other people's feelings doesn't work