Can a user gain more than 2 rep for editing? 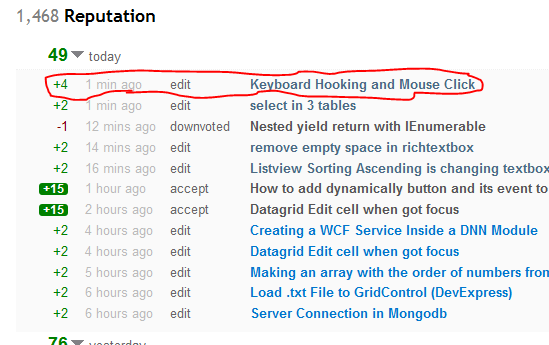 Note: My reputation later went down from 1470 to 1468, so it appears the system realized it made a mistake and corrected my reputation, but hasn't gotten rid of the second revision or the history event.

There is definitely something strange going on.

First, the time stamps on the edits are different:

Those timestamps match the +2 entries in your profile.

But when you look at the reviewer timestamps is when things get screwy:

If the timestamps can be trusted, it appears that something happened that allowed 2 approvals to approve the edit, but at then also approved the edit with the 3rd approval.

Nope. It isn't (well, shouldn't be) possible to gain more than 2 points for making a single edit.

As Mat pointed out in the comments, the edit revisions history does look weird.

This could be a bug, but I'm not exactly sure what's causing this.

After a ton of digging through the database trying to identify how many users hit this bug and the cause of it, we've determined that it's a race condition.

The fix will be going in this week, once we've identified all the places where we're hitting this same issue (Shog's got a list). The fix will include a redis lock (which we already use elsewhere), and it will prevent these very rare multiple entries.

As far as the rep from these aka the extra +2, there are very few cases in which this happened and it involves deleting from several tables to clean it up, so we're leaving it. It shouldn't happen again after this week, when the bug is fixed.

Not the answer you're looking for? Browse other questions tagged bug status-planned reputation suggested-edits .