How is this user able to review posts so long after they were completed originally?

This is a revisit of Are certain users favored the opportunity to review posts? that seems to have grown stale without any solid answer.

Just recently I was baffled by a user's ability to review a "First Post" almost 6 hours after it had been reviewed previously:

The "requirement" for such late, duplicate reviews are questionable and does seem privileged when considering the multiple examples in the First Post review queue (just even from reviews within the last month or so). Even being able to review already deleted posts (I highly doubt this was an instance of keeping the review window open for more than an hour and only reviewing it post mortem - first post reviews are dealt with far more quickly than most other review queues): 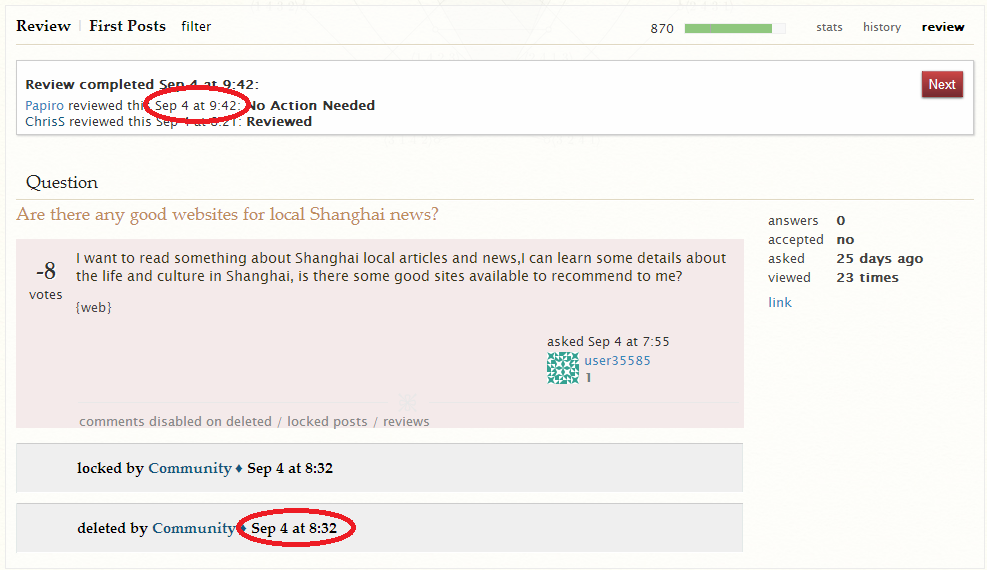 While these examples do not speak to the legitimacy of the reviews, it sure seems biased. Something is amiss...

Over at TeX.SE we have a far smaller community, so these situations are far more noticeable.

Edit: The following are all candidates for the above discussion:

We've had a "grace period" for reviews since very early in the life of the system: reviews could come in late and still be recorded, although generally without affecting the actual outcome of the task. This was done to allow for the fact that multiple people are often reviewing the same task simultaneously; while the system tries to prevent this, it does not disallow it, and in some cases having multiple simultaneous reviewers is advantageous: tasks that require multiple reviews to complete (close, reopen) can be completed more quickly if the same task is assigned to multiple reviewers at once.

As of today, I've altered this logic to pin the grace period to the completion of the task itself: reviews submitted more than 15 minutes after the task has been completed will be silently rejected, regardless of how long the reviewer spent reviewing (or whether the system can even tell). This does not prevent abuse, but it certainly makes abuse more labor-intensive... And it also fixes a related bug: Not getting “credit” for Improve Edit

I found the following to be the only way to achieve this kind of behaviour. One essentially update the HTML to submit whichever code you want to associate with a review other than the default associated with "Next" when viewing the historic review.

It can be replicated under Chrome, but most likely in other browsers as well with some web-element editing capability/functionality/extension (like Firefox).

I've seen this happen a number of times if I leave a review page open for too long. Most reviewers probably do that very seldom, but I wrote a couple of scripts that auto-load new reviews (since consolidated into Review Stalker Reloaded: A cross-site dashboard for reviews), and if I'm not actually at the computer, they could sit there for a long time before I come back to them. (These days the script takes steps to avoid this situation, so I'm triggering this much less often. However, I have been beaten to the reviewing punch by 8 minutes, possibly less.)

Anyone using this or another script, such as one they wrote themselves, could run into the same phenomenon without doing anything they would consider particularly unusual.

Not the answer you're looking for? Browse other questions tagged support bug status-completed review .

2
The ghost review
1
How can someone review a late answer which was reviewed hours before?
522
The current review system encourages fake reviews; some people upvote everything rather than actually fixing problems
381
The robo-approvers are killing my will to review edits
111
How can we make First Posts review actually useful?
12
Not getting “credit” for Improve Edit
27
Are certain users favored the opportunity to review posts?
3
Why did my First Post review not count?
3
Author reviewing edit after it has already been rejected
2
Last reviewer name is missing in closed question
see more linked questions…

38
The /review page needs to be able to handle more than just problem posts
522
The current review system encourages fake reviews; some people upvote everything rather than actually fixing problems
80
Improving the Quality of Reviews: Project Honeypot
151
What are the guidelines for reviewing?
334
What are review tests (audits) and how do they work?
28
Late late answer?
156
Allow all reviewers to see deleted posts they reviewed
111
How can we make First Posts review actually useful?
2187
Firing mods and forced relicensing: is Stack Exchange still interested in cooperating with the community?