Tweaks to the 'Let's get critical' community bot's answers

Each site has its own quarterly review period where 10 questions are chosen at random from that quarter to be reviewed for quality.

Typically the community bot will post the results of the review afterwards in its own answer. However, the order it puts them in seems to be either random, or in the order that the posts were chosen for review, which isn't ideal.

I propose instead that these be ordered by score, highest first.

Tie scores should result in the one with the highest 'Excellent' votes being first.

If those tie then the one with the highest 'Satisfactory' should be first.

If those also tie then the one with the lowest 'Needs Improvement' votes should be first.

If those tie, then it doesn't really matter which is first.

It's a relatively small change but being able to see these in score order is extremely helpful in being able to measure the quality of the posts.

My second suggestion is to split with horizontal rules between each question and its statistics. This is because at a glance it's hard to tell if the one above or below is the one that belongs to the title you are looking at. Splitting them up makes it easier to segment and view.

Comparing the September Review period from the workplace, here is a before and after shot. One done by community, the same one then edited by myself to have the proposed changes. 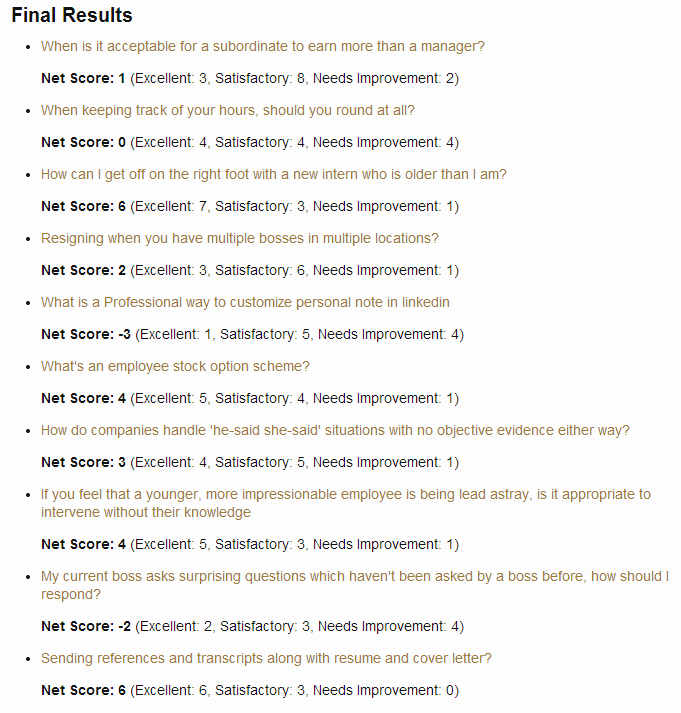 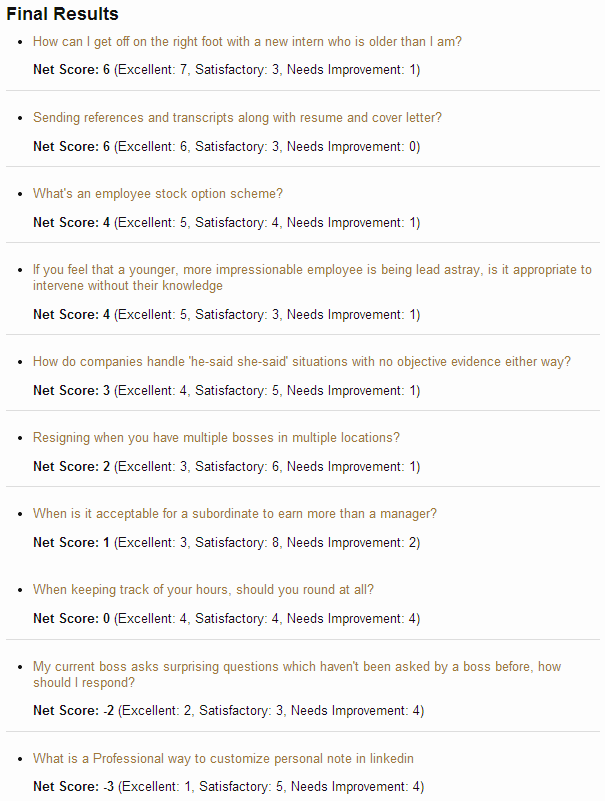 As you can see it is so much easier to determine how the review period went at a glance in the second example, in the first example it is all over the place, hard to follow, hard to review at a glance and generally not as helpful as it could be.

(Just because I don't like unanswered questions when they have been resolved...)

Results of community evaluations should now be sorted by net score rather than in random order. :)

Not the answer you're looking for? Browse other questions tagged feature-request status-completed review .

254
Reset votes on migrated questions
416
Decision on rejected edits should be displayed as a notification to the editor
23
Include 101 rep users (i.e. those with the association bonus) in first questions/first answers within the review page
137
The time of automatic review bans should be increased with every new ban
401
Add an “I don't understand” option for review audits
78
Add silver and gold versions for the Self-Learner badge
126
Let's get rid of the 10K flag queue
578
We're switching to CommonMark
224
Improved experience for users with review suspensions