Question edit was attributed to another user

I suggested an edit to this question a few minutes ago. I edited the title, some spelling mistakes and the formatting of a posted SQL structure.

After a few minutes an edit was accepted which seemed exactly like mine, but to my surprise it is attributed to another user (FerretallicA). I also didn't get any points for my edit.

Looking at the Suggested edits history I found that my suggested edit approved/ rejected and then edited: https://stackoverflow.com/review/suggested-edits/3086162

But finally it is approved more or less in its original form: https://stackoverflow.com/posts/19238753/revisions

Is this a bug? It definitively seems very unfair that the edit and points were attributed to another user.

UPDATE Looking at the revision history, the reject on my suggested edit was done by Community, which is as far as I understand, a bot. Could this have cause a misbehavior of the approval system?

These two question seems similar, but differ in one way or another

Why did this edit get attributed to the community user?

My suggested edit and author's edit were merged 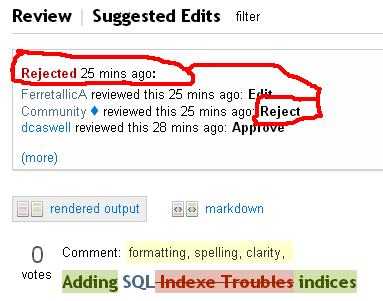 For you update: See Why does the Community ♦ user approve and reject edits?

On checking the question's suggested edits it seems another user has added more information along with your edits. Since that user (with more privileges)tried to improve your answer ans hence it turned to him.

Check this https://stackoverflow.com/posts/19238753/revisions, your suggestion has been REJECTED by community.

Not the answer you're looking for? Browse other questions tagged bug status-bydesign suggested-edits rejected-edits specific-edit .

111
Why does the Community user approve and reject edits?
8
Why did this edit get attributed to the community user?
-2
Edit suggestion rejected by Community, similar edit got accepted later
4
My suggested edit and author's edit were merged