Separate vote in favour and against a feature request [duplicate]

Often I have seen users who are new to meta make a well written, carefully considered proposal that is none the less deeply unpopular; a stream of downvotes follows. This usually ends in the author leaving with a bad taste in their mouth, the most recent example of which is this, in which the author said "This certainly doesn't make me want to use this site in the future or even try to help with the process", never to be seen again. Alienating good users like this doesn't seem like a good way forward.

Worse yet many people (such as myself) never vote against well written proposals because they don't feel it deserves traditional downvotes.

On the other side; the question ban is basically turned off on meta for this reason, but this allows users who lightly troll (I shall not name names I'm sure you have a few users in mind) or fail to do basic research can avoid a question ban because the algorithm can't differentiate between them and people with unpopular ideas.

I therefore propose that a separate vote be kept for and against a feature request as so; 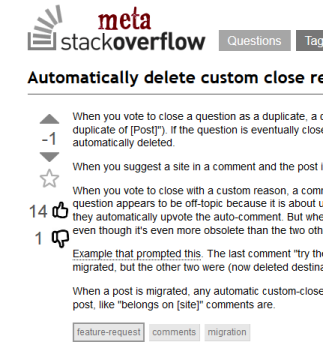 I realise that this would be developer effort for a feature purely on 1/4 of questions on only the meta sites. But this happens most days and I think its worth considering.

19
agree/disagree button on meta or upvote/downvote effects based on tags
129
A Proposal for More Constructive Downvoting on Meta: Express Disagreement by Answering the Question
-9
Should close votes expire with less than 100 views
5
Suggestion was tagged with status-declined and keep getting downvotes
-20
Dealing with questions that must have Arguments,Discussion on meta
-4
Can we add a new reason to close a question? Trivial Syntax Error

184
Badge suggestion: Unsung Hero (5 accepted answers with no votes)
913
Why aren't people voting for questions?
417
Decision on rejected edits should be displayed as a notification to the editor
111
Allow users to vote to close bountied questions
180
Don't lock votes on Meta sites
185
Get rid of the question ban on Meta; suspend actively harmful users manually
416
Add an "I don't understand" option for review audits
129
A Proposal for More Constructive Downvoting on Meta: Express Disagreement by Answering the Question
183
A question should not be deleted by the user deletion algorithm if it has upvoted answers
299
Add optional box for spam flags letting you say why you think it's spam