Can we add a new reason to close a question? Trivial Syntax Error [duplicate] 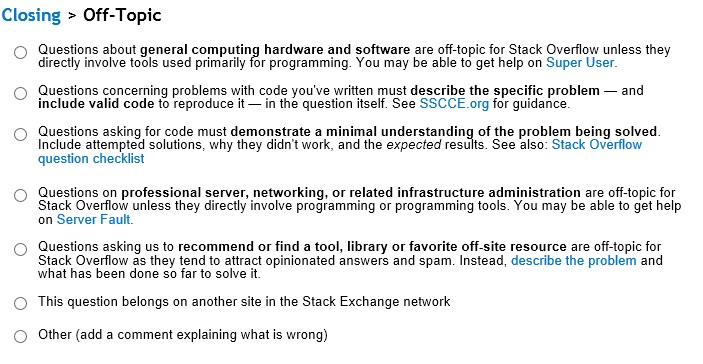 Can we add this reason in the list of reasons to close a question?

This question is off-topic because it is about a trivial syntax error.

This to a programmer appears like a very lame question. First up because the error is clearly printed in the error message and with little effort OP can find it out. Secondly, we did not force people to use notepad as their editors, they could have used some IDE which would tell them their error. Thirdly, they could have taken hint from SO syntax highlighter after they posted their question. Fourthly, we are not debuggers, we are not here to fix basic issues like oh you missed a comma here, such things don't help people in future and only promote laziness. For me such trivial syntax errors don't justify a question / answer session.

Previously we had too localized as one of the reasons to close a question, but now we don't. Do you think we can have this one then?

This question is off-topic because it is about a trivial syntax error.

On what criteria do we base syntax, or anything else, being trivial? Your knowledge, or mine, or the number of same/similar previous questions?
None of these could easily be known.

This is a Q&A site, and people are asking because they do not know something which others do.
So under what circumstances should we flag "trivial" when person A doesn't understand X, and person B does?

The main issue is the close reason you propose is it's a bit too specific, and there are potentially hundreds of other new off-topic reasons that could be added in the same vein, ie:

"trivial" doesn't describe it correctly either. In terms of trying to appoint a new appropriate flag for your example question, it's a case where an answer can easily be found by searching Stack, Google or many other sources quite easily.

Which leads to the suggestions of:

While it seems Mods and high rep users manning the flags allow leeway and action flags with common sense/logic based on the tools we have, this does leave it open for personal interpretation. As the flag is not logical here, by using it we are "hoping" a mod or high rep users understand our logic and agrees.
A potential to waste of everyone's time.

If someone is asking for a fix on their code it can be argued they are essentially "asking for code" - ie the code that fixes it, but the counter argument is they might be asking for "their code to be fixed" and no need for additional code. This question's example is a perfect example of that.

As with a lot of flags, it's only clear cut when you know specifically how it's used, and not immediately logical to anyone for the first time of seeing it.

For these reasons, plenty of users on MSO have argued that some/most/all the flags should have a revamp of wording, description and purpose.
But I digress..

Other
The suggestions to use "other", while might be correct, the use of this Other flag as a fall back is far from ideal. For us having to write something each time and those reviewing it having to read it and evaluate what we meant etc.

Dupe
In the specific example you gave "Parse error: syntax error, unexpected '.'", as you said "Almost daily I see 10's of questions", raising this as a duplicate be appropriate if you could find a similar question.
There will likely be a dupe of nearly all these basic errors, or at least one with similar enough logic that the answers describe the resolve to same/similar issues.

Solution
Would be to revamp the entire flag system to cater for new scenarios which have come about since the flags were created.

However back to this question... a new flag of:

This question is too basic for this site. While Stack Overflow's purpose is to assist people with their questions, they have no place on Stack Overflow when the answers can very easily be sought by a simple search either here or other sources.

Trouble is, as simple as change this would be for devs, the million+ users are familiar with how it all is now. Change can have adverse effects and of course there is always worry that fixing something that isn't really broken and works "ok" can bring about serious issues.

849
Can we have the ability to retract a close vote before it closes?
329
Distinguish close votes by reason
258
Closing changes: [on hold], unclear, too broad, opinion-based, off-topic reasons, bye-bye to Too Localized
88
Can we rename the off-topic close reason label on the primary screen?
402
Add an “I don't understand” option for review audits
91
Categories other than “off-topic” should allow custom close reasons
435
Should Stack Exchange in general be awarding “A”s for Effort?
89
New 10K tool: question close statistics
375
Updating the Hot Network Questions List - now with a bit more network and a little less “hotness”!