Your review was inappropriate [closed]

I was recently reviewing first posts on SO when I was presented with this response:

Why does the C preprocessor interpret the word "linux" as the constant "1"?

I was then presented with: 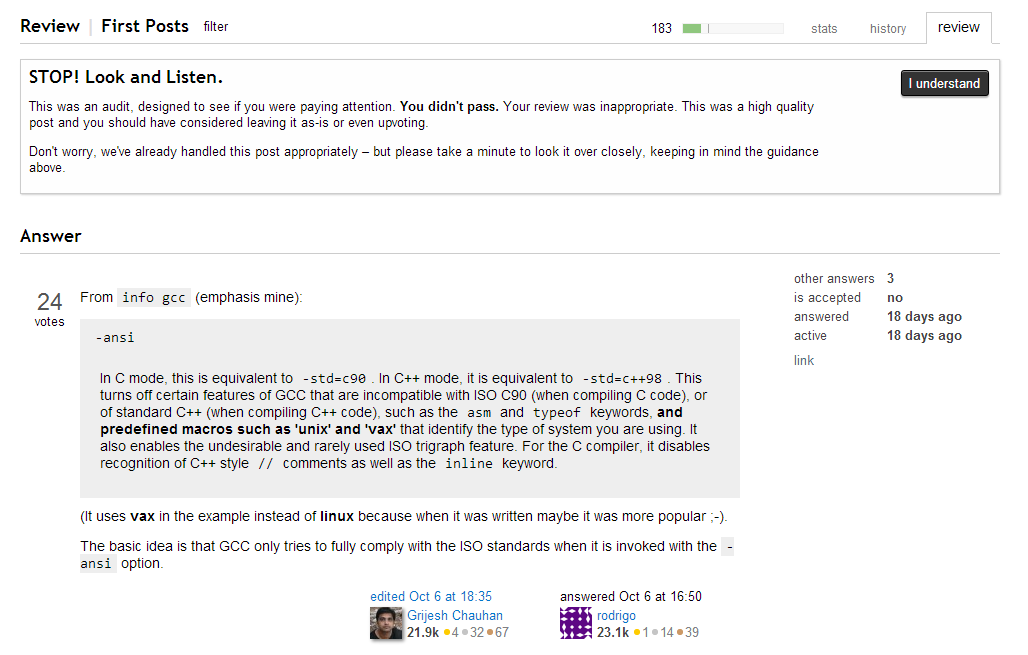 Now when I try and review anything I get:

You have failed too many recent review audits – looks like you might need a break. Come back in 2 days to continue reviewing.

But I took a look at the latest page of my review history (~50 reviews) and out of all the audits I was presented with I've passed every one except this issue I just encountered.

Any idea what is up?

The system recorded you as having flagged the post. This will immediately complete the review and fail a known-good audit.

So I spent some time checking the logs. Your previous two reviews - completed just seconds earlier - did result in you flagging the posts (as not an answer and close). I've noticed in the past that I have a tendency to "default" my next action to whatever I've done on previous reviews - it's possible you just clicked "flag" out of force of habit without doing so consciously...

Then again, this is the second time someone's reported an audit failure with these circumstances while strongly asserting that they'd taken no action whatsoever. It's also possible there's some obscure bug that can cause this.

Since you aren't in the habit of failing audits, I've lifted your review ban. If you run into this again, let us know. Two suggestions for you otherwise:

This is not without precedence, as a previous reviewer, also in the First Posts queue, said that he hit "No Action Needed" and that triggered an audit failure.

Originally, I believed that was by design when I saw the earlier post, however, given you have passed two with the same action, it is clear that it is not. That means there's got to be something else going on, possibly a bug, or maybe a browser issue, that is triggering failures for the same actions that pass other audits.

Separately, as to why this failure triggered a ban, I can't explain that either. I glanced through your other reviews and did not see a single failure, so either you have audit failures that are not showing up in your history, or there is another problem.

Not the answer you're looking for? Browse other questions tagged support stack-overflow review review-audits review-suspension .

25
Why did I fail this review audit?
5
Banned for review cause of not approving added tags in suggested edits
8
Received message stating I failed too many review audits?
6
Review Audit Honeypot Bug

524
The current review system encourages fake reviews; some people upvote everything rather than actually fixing problems
382
Add an “I don't understand” option for review audits
13
Review ban after skipping a review
32
How many failed audits trigger a review suspension?
25
Am I reviewing correctly?
85
Give new edit reviewers some audits to begin with
2
Return after brief hiatus to find I have a review ban
2322
Firing mods and forced relicensing: is Stack Exchange still interested in cooperating with the community?