Recently there was a change causing the contents of any deleted post that received even one single spam/offensive flag to be hidden, along with all actions. Super-ubber-lock. Final death. We can't flag it and need to go to the revisions to find who posted it.

While it's good and welcome for actual spam, many times frustrated/angry/troll users will mark as spam virtually anything, including just bad answers. We don't want to give them such overwhelming power. 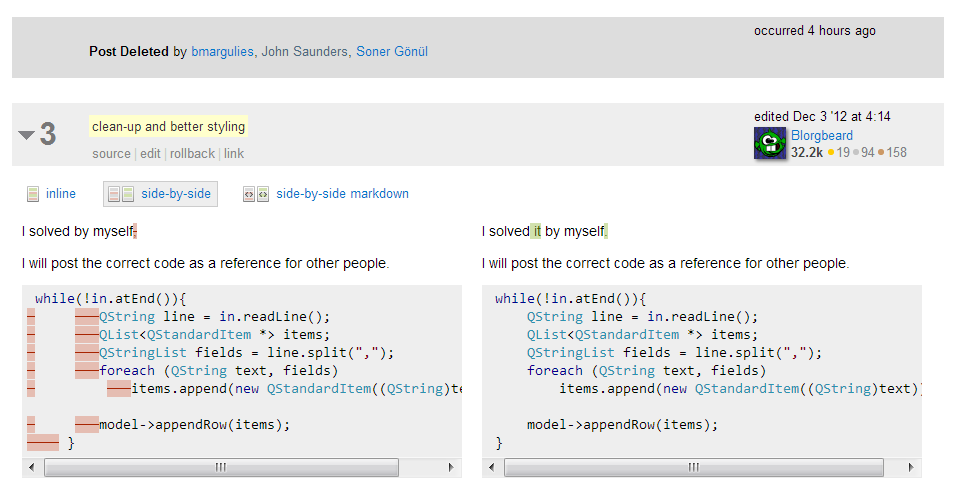 As you can see, it was just deleted by three 20K+ users, not due to spam flags. Probably someone really angry at the OP marked this as spam.

It is NOT SPAM, neither offensive. Just a bad answer since the OP took the code from existing answer and re-posted instead of marking the answer as accepted. It deserve to be downvoted, maybe deleted, but not vaporized.

Can we please apply that "final death" only for posts that received at least three spam/offensive flags?

Also, while investigating this our one and only Shog found a bug - turns out the mask is triggered even when the spam flag is declined.
Above bug is fixed.

Another false positive, here on Meta... poor new user was only trying to be funny and got barrage of downvotes and probably one or two spam flags before deleting his own post. (He posted link to a book)

feature-request deleted-answers spam
Share
Improve this question
edited May 23 '17 at 12:36

There's a serious problem with this request: sometimes, it's more expedient for a moderator to destroy the user than it is to go through each of their posts, individually flag-deleting them. This tends to be the case with the worst spammers or trolls, so not turning this feature on in these cases is probably a bad idea.

The issue with the example you posted isn't that it had an offensive flag at one time - it's that the flag was marked "helpful". Why? I don't know; it was a long time ago, and spam/offensive flags have had some problems in the past wherein they didn't integrate cleanly into the rest of the flagging system.

I've changed the status of that flag; if the post is still hidden, then I would consider that a bug - otherwise, I would say this is a case where, when you find an incorrectly-hidden post, you should just flag for moderator attention and ask that the flag be removed. Hopefully, moderators aren't validating too many incorrect spam or offensive flags.

To help in evaluating the actual feature proposed here, I've taken a random sampling of 100 spam- or offensive-flagged answers from the past 90 days on Stack Overflow, where the number of such flags was < 3 (and there was no moderator-cast binding flag involved). See what you think of making these more visible...

Going forward, hiding contents will only take account of spam/offensive flags that have been resolved as helpful.

This fixes the reported/discovered bug, but doesn't deal with the feature request, which will have to wait for more data following the answer by Shog9.

Not the answer you're looking for? Browse other questions tagged feature-request deleted-answers spam .

218
Allow flagging a comment after upvoting it
41
Remove links when a post is deleted by Community from spam/offensive flags
88
Don't automatically dismiss spam / offensive flags when a post is deleted by the owner
22
Flagging history doesn't show anything when the only flags being cast are spam flags
162
Flags in chat are defective by design
298
Add optional box for spam flags letting you say why you think it's spam
2782
A Terms of Service update restricting companies that scrape your profile information without your permission
413
Can a machine be taught to flag spam automatically?
169
A machine can flag spam automatically. Can it do better?