The answer, unfortunately, is no.

Tag Synonyms were introduced in August 2010:

It’s been clear for a very long time now that we needed some kind of tag synonym system, one that the community itself could maintain and control without having to bend the ear of a moderator.

With a lot of help from Shog, I did some analysis of Tag Synonyms and how they get approved.

I took the 500 most recent tag synonym suggestions on SO and looked at what percent has been approved by moderators vs. the community (the people intended to maintain the synonym system per the blog post above).

Of the 272 approved, 194 were created by moderators (someone with a diamond next to their name on the 'creator' field). That is 71.3% of the approved synonyms having been handled entirely by someone other than the community (a quick look at the tag-synonyms and synonym-request tags will show that this is a generally more reliable method of getting a tag synonym finished).

He also provided two data dumps of time before approval. He gave the number of days before a synonym got approved by the community, from the beginning of time, and just for the past 2 years. While the time to get a synonym approved was only 15 days from the beginning of time, over the past 2 years it has taken 46 days. The pending synonyms currently have an average age of over 150 days as stated above.

I do not want to make voting super easy, also I want to restrict voting to tag experts.

He has definitely succeeded in the first part, but unless the mods are omniscient (not saying they aren't), chances are that there could be some improvement in the second part.

First we need to make it easier for the experts to start voting on synonyms.

This is the current workflow for finding a tag synonym and voting on it. 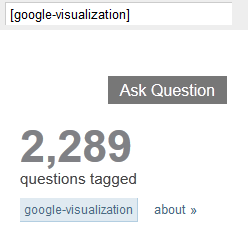 Note: Despite it saying Synonyms (3), that doesn't mean there are 3 pending synonyms. It means the tag has 3 synonyms, and doesn't even indicate whether one is pending or not.

Step 3: Vote on the Synonym

So our ambitious tag-synonymizers need to click on a link with no knowledge of whether or not a synonym request is actually pending, and then they have to actually have enough score in that tag to actually suggest the synonym. This means that there is a barrier to finding the suggested synonym even before the restriction on voting. Waffles has definitely succeeded in making it difficult to vote on these.

There are two different 'types' of synonym creation. For the sake of this example, let's talk about google-geochart being made a synonym of google-visualization.

Normal tag synonyms created by your average user will not retag existing questions. Searching for [google-geochart] as a tag will redirect you to [google-visualization], but the old tag will still remain as a marker until those posts are edited.

So the old tags sticks around as a marker, but there is no actual way to use the marker for anything of value. That means that making a synonym has the effect of removing a piece of useful information which may be one reason it isn't taken so lightly and is hard to implement for normal folks.

At the same time, tags can be merged by moderators, so that all questions with the old tag are automatically adjusted to be marked with the new tag instead. This also eliminates the additional information, but does it in one fell swoop.

Synonyms are supposed to aid classification but actually kind of haphazardly remove information. This means that if at some later point in time google-geochart actually reaches a ton of users who want additional guidance, the old questions with that tag will require intervention from the developers (most likely) to get that information back and allow the information to be indexed properly. This is less than ideal.

Tag synonyms should be shown to people who can vote on them via a notification. Something like this:

The notification could be made monthly, or weekly, or one-time, but users with interest in that tag should at least know that something is being proposed so that they can move the process along.

As mentioned above, the Synonyms link when you are browsing a tag doesn't even show you that there are synonyms pending. Adding that information would make it easier for people to vote:

This link would be hidden if there are no suggestions, and would cause absolutely no change to the layout of the page.

Allow users to explain the suggestion reasoning. Currently the dialog for suggesting a synonym is rather minimalist:

Let's say I want to propose that c# is a synonym of c++ -- now I don't have reputation in either tag, but I could just go and retag one of my previous questions with c++ and then I can vote on it anyway. In times when I'd like to use this 'trick' it shouldn't be necessary, in times when I shouldn't use this trick, I can use it anyway. The limitation is silly as a result (it doesn't help good behavior or prevent bad).

Remove the score limitation for trusted users over a certain reputation (5k? 7.5k? 10k?) that allows them to make synonym suggestions (but not vote on them without the requisite score in that tag). This will allow good-natured users who are driven by a categorical imperative to actually start suggesting synonyms for others to determine the value of (much like, say, suggested edits, or flagging to close).

If Synonyms were easier to 'undo' as it were, we would be able to be a bit more loose with them since we wouldn't lose the ability to categorize more specifically, while still having all the questions in the larger group easily accessible. Tag Hierarchy/Trees have been discussed in the past, but this would be a far simpler way to handle it, which would allow synonyms to put together useful information (for instance, there are 13 tags related to google-maps), while not barring someone from searching for a specific subset (say google-maps-api-3, or from splitting that off later if it needs to be.

The first 2 suggestions are similar to this feature-request: Tag synonyms: show suggestions to people who can vote

The third suggestion was taken from my answer to Jon Ericson's question.

The fourth suggestion is taken from Can we allow 7.5K users to suggest tag synonyms without a score of 5 in the tag?

These suggestions are not mutually exclusive, nor are they exhaustive. Tag synonyms are great for grouping questions on related subjects together, especially when the small niche topics get little visibility on their own.

This isn't really a critical issue, it is more of an 'it'd be nice' sort of thing. And it'd save the following mods from the tireless work they do making SO a tidier place:

Note: The above numbers are for SO only for the last 500 suggested synonyms -- these few, these proud, these moderators have approved far far more on other sites (including meta) and over a longer period I'm sure

I recently proposed a tag change on Worldbuilding Meta and got a lot of support for the idea of making one tag a synonym of the other. I had enough rep and votes in the tags to make the proposal, so I did.

No one saw it.

It did not show up in anyone's review queue (including someone with very high rep who was able to use the link I provided and vote on it, so it wasn't a matter of the system weeding out people not eligible to vote).

I did not get any notifications when people voted.

Ultimately, a moderator made an argument for keeping both tags separate and we on Meta went with that.

I just checked and the synonym proposal is simply gone. I don't know if it got -2 total votes and was automatically deleted or if a moderator removed it. Either way, I never got a notification.

Looking to bump this topic up again, considering its been nearly a decade without any formal response and no change to how synonyms (and most of the tagging system) are handled.

I specifically want to highlight the requirement of having a certain score in a tag before suggesting a synonym. Especially on smaller sites, this makes it very difficult to even propose synonyms, let alone get them voted on by enough users. This essentially limits synonyms to be entirely handled by mods.

Beyond a rep limit to avoid users spamming synonym suggestions, there shouldn't be any other limitations on just proposing a synonym. Maybe the requirement for upvoted answers/questions for that tag is worthwhile for voting on the synonym, but even that might be a stretch.

Not the answer you're looking for? Browse other questions tagged feature-request tags tag-synonyms .

1226
Encouraging people to explain downvotes
993
Show all of my question/answers to me even if they are deleted
153
Could the tagging system be enhanced to support tag synonyms?
201
Can we allow 7.5K users to suggest tag synonyms without a score of 5 in the tag?
419
Decision on rejected edits should be displayed as a notification to the editor
260
A real solution to ambiguous tags
1250
Don't throw away all votes when a user is deleted
84
Does the tag synonym suggestion system work?