Too many tags requested (search limited to 25 tags)

I just noticed this and didn't find another post about it.

There seems to have been a change in how the tagged search filter works, and now my old bookmark, which consisted of around 34 tags, serves a blank result page with the text "Sorry, too many tags requested". Okay, I also agree they're too much tags and the tag list could be refined. Taking into account that wildcard searches don't work around this limit, it well might be a bit too tight.

Edit: The search seems to be limited to 25 tags now. The character limit on the search textfield doesn't seem to have anything to do with it (example). Anyway, using wildcards on the search doesn't work around this either. For instance, searching for [java*] or [visual*] also returns "Sorry, too many tags requested". 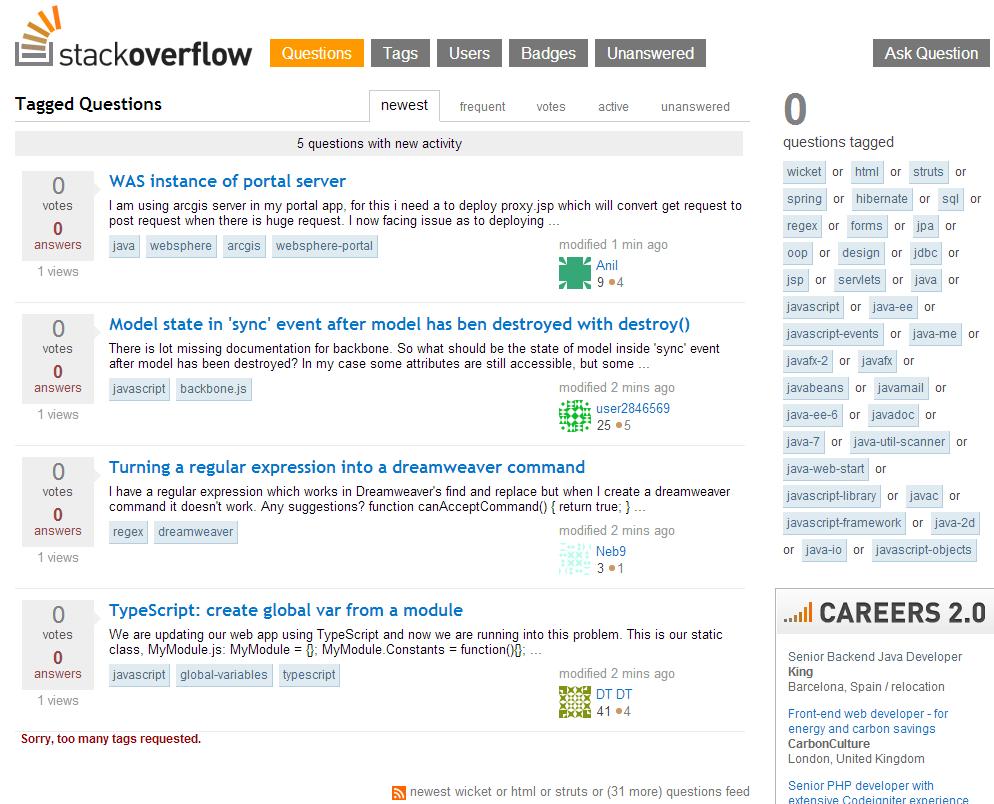 We've had some problems lately with some people using excessively large lists of tags. It can negatively impact the system, so to try to avoid impact to the vast majority of users who use sane lists, we implemented some restrictions.

Why is it not possible to filter by those tags initially but the WebSockets load through them properly? Is this intended behavior?

Because this uses a completely unrelated stack which isn't hugely impacted. If that was abused, I'm sure we can tighten than too. There's a difference between "watch live events, interested in these things" and "search these 6 million posts" (the former is cheaper, thanks to how awesome redis pub/sub is, and the fact that we're read-heavy, not write-heavy).

Taking into account that wildcard searches don't work around this limit

Actually, that isn't quite true; but there is still a limit imposed when using wildcards.

Most users will not notice any impact from this change. It isn't meant to be punitive, but: huge tag combinations do have cost. We can perhaps play with the numbers a little.

I would, however, rather address this by understanding the scenario that leads you to want to query this many tags in one URL. There may be better options...

I'll tell you what: I'll make the number 35 while I do additional analysis on the worst offenders. Deal?

Not the answer you're looking for? Browse other questions tagged discussion tag-search .

12
“Root” tags to organize larger sites with multiple categories
3
Usage and removal of tags
8
Does the tag system need revamping?
323
Stack Overflow is getting a Meta of its own
234
Feedback Requested: Design-Independent Graduation
373
Updating the Hot Network Questions List - now with a bit more network and a little less “hotness”!
342
Let's take a look at the interaction between staff and the “power users” of the network
11
Let's disambiguate / burninate [filter]