Influence of the weather in the upvote/downvote ratio?

I'm under the impression that the weather can influence the mood and have some impact in voting statistics.

Is there any way of verifying this hypothesis? I mean, is the daily total of upvotes and downvotes available somewhere for mere mortals like me?

This link is very interesting, I would love to play with this kind of data, where can I get it?

@PauloScardine Where in the world do Stack Overflow users say they are from? – animuson

At least! The data explorer is what I was looking for, never heard of it before.

You can download the number of votes per day from the Stack Exchange Data Explorer with this query:

(Note that VoteTypeId 2 is an upvote, VoteTypeId 3 is a downvote). If you download the information into a CSV, you can graph it using (for example) R: 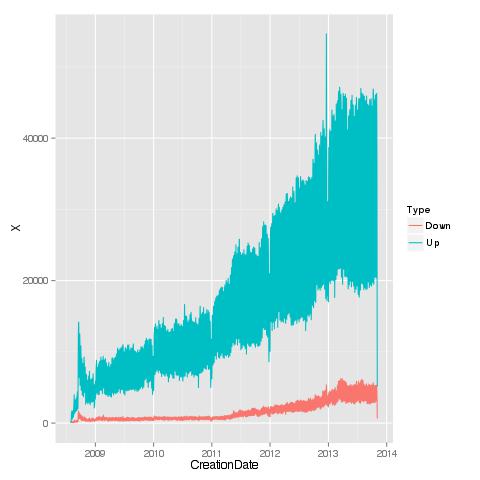 Of course both the number of upvotes and downvotes has been increasing with the number of users, and varies greatly by the day of the week, but there is no cyclical trend by season immediately visible.

Now, since there's so much noise within a week, this noise may be hiding a real trend in terms of "% of downvotes", which is what you're actually interested in. So let's look at % of votes each day that were downvotes. We'll also use local regression (LOESS) to smooth over time: 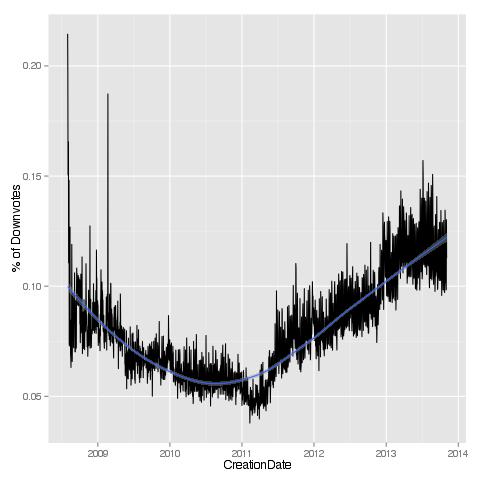 Now, I still don't really see a seasonal trend (though I might note that the recent peak in downvotes was in the summer). But this does illuminate an interesting unrelated trend: that the % of downvotes decreased until about 2011 and then has been steadily increasing since. I suppose there are many possible hypotheses that could explain that!

As stated by animuson, you can see the rough geographic distribution of users.

You can determine upvotes and downvotes from the data explorer by date. For instance, this query will return the total number of downvotes from November 1st, 2012 to February 28th, 2013:

If you are better than TSQL than me (not a challenge), you can edit the above to tell you upvotes and downvotes for whatever season you want. You can then modify based on whatever geographic distribution or weather data you want to use to get a reasonable guesstimate.

SE sites are globally available. When it's cold somewhere, it's equally warm somewhere else on the planet. There's no requirement to provide geographic locations in order to post here. How would you propose these numbers are accumulated? Based on IP?

In addition, there is a considerable increase in poor quality questions based on educational institution schedules. Students tend to ask a lot more poor quality or clearly homework questions at certain times of the year (none of which correlate with weather conditions), and these questions cause more downvotes and closed questions at those times. How would you adjust for that factor?

There's simply no way to extrapolate weather impact on voting, and a "daily total of upvotes and downvotes" is meaningless except as an indicator of how many votes of each type were made on each individual day.

Not the answer you're looking for? Browse other questions tagged discussion voting data-analysis .

134
Should downvotes on questions be "free"?
74
Where in the world do Stack Overflow users say they are from?

1494
Fastest Gun in the West Problem
1880
What is the XY problem?
202
Change upvote/downvote tooltip on meta sites
540
The current review system encourages fake reviews; some people upvote everything rather than actually fixing problems
309
We're working on a new stat to help convey the reach of your posts here
422
Can a machine be taught to flag spam automatically?
2507
Firing mods and forced relicensing: is Stack Exchange still interested in cooperating with the community?
300
An update on my resignation notice
554
The company’s commitment to rebuilding the relationship with you, our community