Button to automatically add the reason for closing, when voting to close a question

As it seems that anonymity of votes is a primary concern for many people, and my original request was going in the opposite direction, I am amending it to ask for freedom of choice.

Also, a proposed alternative addressed this problem, but it turns one that the same functionality is already implemented, in a way.

But the point is that on StackOverflow right now there are 92k+ close vote reviews, and go take a tour and see how many times close vote are casts as "offtopic" or "too broad" or "add a code snippet" and no comments are present (disclaimer: this is my experience in doing reviews, i did not run a query against http://data.stackexchange.com, also because there is no column in the Posts table for the reputation of the users at the time of posting).

So my amended feature request is:

can we get an additional button ("vote and comment") or a checkbox ("add a comment") beside the "vote to close" button in the vote dialog? So that, when it's clicked (or checked), a comment containing the reason the close vote is cast for, is automatically added to the question.

Automatically add a comment containing the reasoning, when voting to close a question

This may have been requested in the past but I could not find it.

When voting to close a question as a possible duplicate, a comment that links to the candidate question is generated and posted:

possible duplicate: Button to automatically add the reason for closing, when voting to close a question

Is it possible to do the same for other closing reasons (too broad, unclear what you're asking, etc.)?

The wording of the reasons is very good and most of the times fits nicely; having comments of that quality satisfies the "be excellent to each-other", over hand-written quick comments that might become too aggressive or hilarious, and it's obviously better than voting without leaving any comment.

Unfortunately, people take any sort of criticism, no matter how constructive, quite personally. There are 153 duplicates of Encouraging people to explain downvotes.

People don't like criticism. But it's essential to maintaining high quality of content on SO, so time and time again the community seems to err on the side of caution when revealing the source of any negative criticism, preferring instead to soften the psychological blow.

My primary concern is that I could no longer vote to close anonymously. I am very active on the Workplace trying to help new users and improve questions, but will often place a close vote while trying to help someone improve the post (I can always retract it later). If my close vote gets posted as a comment, it may leave the new user more reluctant to work with me, and give me the poor choice between keeping site quality up, and maximizing the chance of improving new user experience.

Anyone who has 3,000 reputation can see which close votes have been cast, and they can comment that a question is gathering close votes of a certain type if they so feel the need. I don't see any benefit to advertising which users have voted to close on questions that are still open, and I definitely see a potential harm as explained above.

Note: Apparently the below suggestion is already implemented for users with 250+ reputation. So for the developers who I am sure fawn over my every word, you can happily disregard the below as you did it already.

As an alternative, I may not have an issue with a user being able to see the close votes on their own questions (mimicking the current menu with anonymity and no ability to vote). But that is very different from the current request. Something like this:

If there are no close votes on the question, it should display as normal:

If there are votes, an added option should be added like this:

If that link is clicked, it should give a menu like the close vote menu, only anonymized, with a link of what this window means: 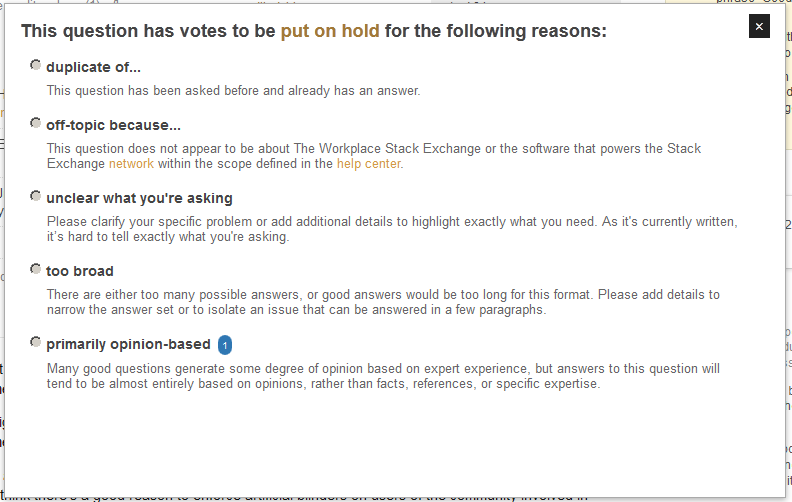 This should be accessibly by anyone on their own questions only, and does not allow voting, just seeing what votes are present.

Not the answer you're looking for? Browse other questions tagged feature-request stack-overflow comments vote-to-close close-reasons .

542
How about a "Vote not to close" option to counter the "Vote to close"?
1203
Encouraging people to explain downvotes
850
Can we have the ability to retract a close vote before it closes?
852
Allow an edit to notify downvoters: "I think I've fixed the issue now - please check"
971
Show all of my question/answers to me even if they are deleted
397
Add a way for moderators to cast a normal, non binding close/open vote
331
Distinguish close votes by reason
1237
Don't throw away all votes when a user is deleted
411
Add an "I don't understand" option for review audits