This just happened. I waltzed into the PHP room, and sure enough:

If this isn't evidence that we need a room star creation reputation minimum, I don't know what is.

While I believe functionality in this proposal would be optimal, it is perfectly understandable that such an implementation may be too large for reasonable expectations.

Alternatively, as has been discussed elsewhere and in the comments (and additional notes) below, a reputation minimum for room star creation may be satisfactory to prevent clutter.

This could be broken into two functions:

Continuing with the frustration from this question, I'm wondering if a distinction between personal stars and room stars would help manage the way we mark content as "interesting".

While there aren't any specific guidelines on star etiquette (please correct and link accordingly if I'm wrong), the tendency of regulars in various rooms is to star content that has some sort of permanence and relevance to the rest of the room.

Occasionally, however, an unfamiliar face will wander in and start starring things left and right. The stars are relevant only in the context of their conversation (typically regarding a problem about which they've visited the room for guidance) and only to themselves. 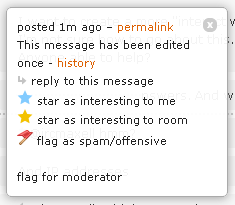 This would permit people to track their bookmark content on-site, without it "polluting" the room stars.

As stars are inherently public, personal stars could be visible publicly on a given users' chat.stackoverflow.com profile.

I like the "star as interesting to me"... but were that implemented, the next step would be creating bookmarks related to someone and not a room as you can end up with non-removable (except by creator) irrelevant conversations associated with the room...

Anyway, it's a tricky one due to any standard on what starring should be used for. Short of a minimum reputation requirement which probably should be inline with the requirement to upvote questions/answers on the main site instead of another specific chat limit - perhaps it should be possible to disallow non-room owners starring new posts. This would enable RO's to star posts appropriate for the room and members can still star these posts if they like them - this doesn't then reduce so much the chance of someone getting the talkative badge. It also means that RO's don't have to spend time cancelling stars on noise.

Not the answer you're looking for? Browse other questions tagged feature-request chat chat-stars .

653
Any way to send a personal message to another user?
1248
Don't throw away all votes when a user is deleted
15
Chat stars on trivial messages
44
Allow cancelling of stars from message
69
Provide a way to determine which user is spamming stars in chat
94
I'm seeing stars! (I can see who starred a message and so can you)
13
Mass-cancel stars in chat room
31
Chat moderation tools are insufficient for combatting star spam