Why is the HandleSuccess method such a terrible one?

As per this tweet by Jason Punyon, I was kind of wondering if any of the SO devs could elaborate a little on why exactly this method is so terrible/hard to refactor?

A few choice words about HandleSuccess from the #stackoverflow chat rooms. 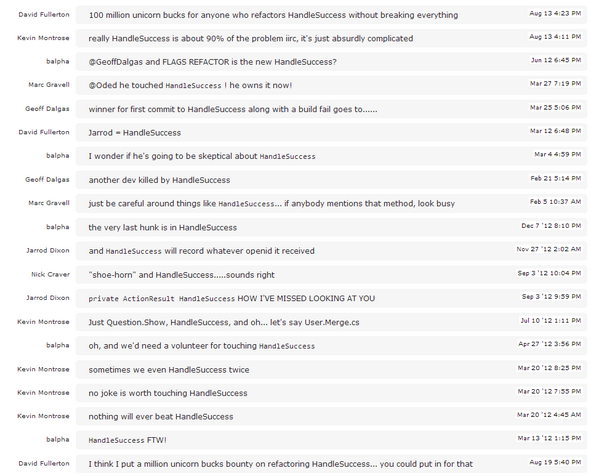 I do not know what the HandleSuccess method actually is, but from what I can read in the tweet/pic, I assume it is a part of the Stack Overflow code base.

It's the method in UserController.Authentication.cs that handles a successful OpenId authentication. As such, it contains all the brittleness that is the handling of various edge cases around OpenId that have been discovered over the years. In addition, session creation and – because of things like converting an unregistered to a registered acount – user management are initiated from here. And because user creation may also require network account creation, and a network account needs a site user, there are some nice race conditions to be worried about as well.

HandleSuccess isn't actually as horrible as its reputation, but still any kind of having to touch that method is usually a "drawing the short straw" kind of thing. Nobody wants to be the person who broke login. 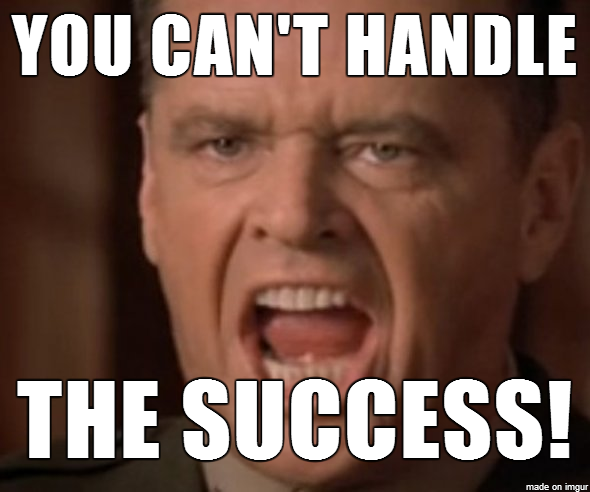 I tried to grok the 200 lines of code that signifies an actionresult which somehow starts at stage 2 and contains the word if 54 times. After having read it 3 times I uh,

Everyone deals with success in their own way.

What makes it kind of complicated though is the basic process of authenticating efficiently against multiple providers all the while accounting for a slough of strange behaviors and attempted exploitations (turns out that programmers like to game systems).

Perhaps the user wanted to use an openid provider, but didn't have an account with them. Well it is too late. They were already redirected. So at that point the user is making a new account and then expects to magically return all signed in using their newly created account.

But hey, that doesn't always happen. Maybe they entered the correct credentials for the provider and the rest of the exchange side for the user needs to be examined. Is this openid even associated with someone? Or, does someone already have a different openid associated with them but logged in with this one for some reason while already logged in with another one?

If they did have the correct openid account, and no account with SE, maybe they want to create one? Or they don't have to. What if they try to create one but it exists? Better hold on to that openid authentication through this whole process. Definitely don't want to start over... that would be awkward! That is strange, this user was merged with another user but tried to log in from their original openid.

Dang. Did all that and they weren't even using https. They should probably start over. Finally, got through it all again? Then you went afk for two days and clicked submit? Did your cookie expire? Hm. Oh well, lets send the user back.. Wait, where were they again?

Not the answer you're looking for? Browse other questions tagged discussion login .

41
New year, new experiment: Login and Signup UI
61
New login & signup pathway for the Stack Exchange network
39
Include a line number when there's a syntax error
19
Who is this user #0?
14
When someone forgets to enter their username on the sign up page, prompt them to enter it rather than throwing an error
5
Can't finish registration in Stackoverflow.ru

326
Stack Overflow is getting a Meta of its own
33
Answers with insults
417
Can a machine be taught to flag spam automatically?
290
Why we don't keep public records of suspensions
188
We're more aggressively enforcing self-moderation in chat
356
Let's take a look at the interaction between staff and the "power users" of the network
579
We're switching to CommonMark