Often people who receive down votes are uncertain why they are receiving them. This is in part because those giving the down votes do not wish to comment publicly for fear of revenge down voting (and the general social stigma of publicly saying "This sucks because" 1) and also because writing comments takes time. Therefore I propose2 radio buttons to select from a number of common reasons for down voting.

A related solution; anonymous comments on down voting also sets out to solve this problem, however that does not solve the effort issue and also introduces the risk that when comments are anonymous people may feel able to say anything 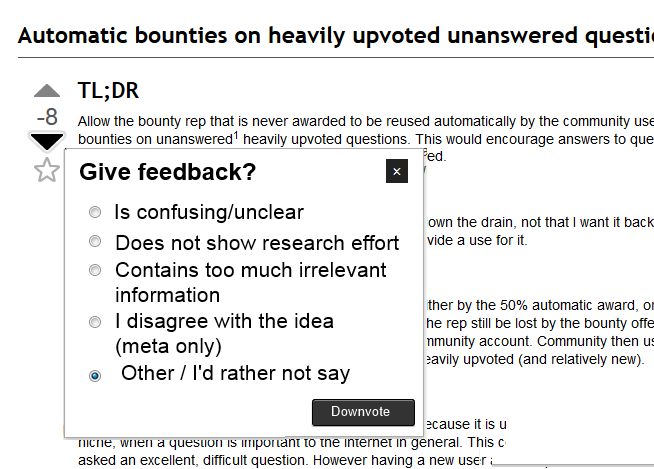 On hovering over the score the OP of the question (and possibly everyone else) would see a bar chart of why people down voted.

We don't tell people how to vote

Why not have a free form "other"

Without having to be publically accountable for their comments (or reasons) people could get very nasty. It is for this reason that Other wouldn't ask for more information

1 I’m sorry, I forgot this was the internet. There is no stigma to saying things suck
2 I say I'm proposing this, but I thought I had seen this before, I couldn't find it on search however so if so this idea needs a duplicate just for search terms

Okay, we all know that "I'd rather not say" is not for me, so here goes. The problem I have with this idea is that the feedback provided is not all that great. Perhaps something is really better than nothing, but I'm not sure it's all that much of a help.

I think it's not unclear or confusing. I wrote the question. What is confusing here? How is this unclear?

Contains too much irrelevant information

What is irrelevant here? I've tried to ask a well put, detailed question. Why are you downvoting me? How can I address this?

Wrong how? I think it's right

Yes, you provide more information than if you'd have a downvote as it is now, but I wonder if this does not simply end up in an excuse to leave no real comments any more. Hey, we told you that 4 users think it's "confusing", now you go deal with that.

So, some random musings about why I don't like this idea...

First, I am generally against anonymous comments. They separate people from accountability. We have enough trouble with people acting appropriately when they are accountable to what they are saying. This could make things worse - in exactly one of the situations where it can most easily go downhill fast.

I'm really ambivalent about the idea of pre-packaged comments to begin with. I think they are a 'necessary evil' with the close reasons. And maybe - maybe - they would be helpful in some rare cases of down votes.

But has anyone checked into any stats on how many new users even notice they've been down voted in the first place? How many people would actually end up being provoked by such an anonymous comment? I can see the cries, now; "You anonymous trolls are just down voting and giving me meaningless explanations!"

I think if people want to explain, they should do so. And they should do so kindly, as appropriate. I don't think any canned list of comments would really be helpful and, to repeat myself, I think making them anonymous would make things worse.

why make SO a kinder garden? If you get 1 down vote or 2 that could be someone who doesn't like you or disagrees or thinks your question/answer is poor. if you get 5 down votes that means there is something seriously wrong (against the rules etc) with your current question/answer which is usually followed with a hold specifying exactly what is wrong.

IMO I disagree with your idea and it would become really annoying selecting why I am down voting :/ specially excel and vba where almost 80% of the questions deserve a downvote

A down vote is a down vote and all you can do is live with it. If there is something seriously wrong your question gets closed / answer possibly reported to a moderator => further, it gets closed and you can see the reason why.

Also, if you're here for the first time and get properly down voted you may want to reconsider a few things; read the rules! how to ask/answer a question - we have plenty of help around just waiting to be seen. All the effort we have made to create the help centre can't just go to waste now.

There is already a feedback button and you can select way more options !
Let's not forget about it... :)

Not the answer you're looking for? Browse other questions tagged feature-request down-votes .