"Good morning. Here is something awesome that you got last night!", said the Top Bar:

"21? That must be two answer upvotes and, um, an answer that I downvoted that was deleted?", I thought. Ok, let's look at the details and find out: 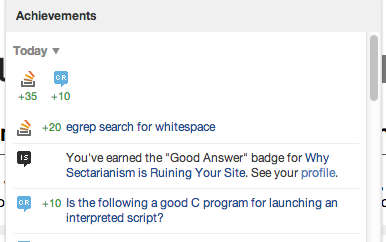 The +20 on my egrep answer is new and I've seen the other Achievements on the list, so where did the extra +1 come from? In order to avoid confusion, the recent reputation changes in the dropdown should add up to the number in the notification.

I suspect this particular case is a bug. Assuming the +1 is a downvote reversed by an answer deletion, I could see the argument for excluding it from the Achievements dropdown. After all, it's not exactly something you accomplished. Except it kinda is. Part of the reason for downvoting is to democratically censor low-quality content. The ultimate sign that such content was deemed beneath community standards is when it gets deleted. I'm not sure that we should award a badge, but putting a note in your achievements in such cases seems like it would reinforce positive (albeit negative) behaviour.

This question is a feature request that rep gains from deleted downvotes be listed in the Achievements dialog, without getting into broader issues of displaying other activity on deleted posts such as those discussed in Reputation items in the achievements dropdown don't add up. Thus, this is not intended to completely address the issue of the Achievements sum not adding up, but is intended to help encourage good community moderation by appropriate downvoting of low-quality content.

When you downvote an answer, the event shows up in this dialogue (but doesn't light it up). When you post a bounty, same thing. And when you lose rep because a user was removed, that shows up here too. For consistency, the +1s from these deletions should, too. "Correcting" the notice to say +20 instead of +21 would be moving in the wrong direction, concealing the event entirely until you happen to notice it via other means.

Because most of the time you won't be able to see the deleted post, and for consistency with "user was removed" events, it would be sufficient to say "+1 downvoted post removed". It's not necessary to identify the specific post here, just the site. Somebody who really wants to know can go digging on his own.

Not the answer you're looking for? Browse other questions tagged feature-request notifications top-bar achievements-dialog .

3
+2 reputation for what
4
Inconsistent and confusing rep total in achievements tray after downvoted answer was deleted
2
Recent achievements shows +1, but nothing listed
199
The new top bar is out on meta. Consider it a beta
39
A badge that rewards "prophetic" downvoting
40
Ignore the rep change caused by placing bounties in the achievements reputation indicator
12
Is there a way to turn off this disturbing green light from the status bar?
41
Reputation items in the achievements dropdown don't add up
8
Findable canonical questions?
1
Achievements dialogue sum error?
See more linked questions