A user suggests an edit which gets rejected as being too minor. 7 minutes later the same edit gets re-suggested by the same user on the same post and gets approved.

So actually this means that someone can repeatedly re-suggest the same edit until it bumps into a set 5 reviewers, from which the 3 of them will approve it. Wouldn't it make more sense if, after having a suggested edit being rejected on post, lose the right to edit this post again (at least for a time period)?

I know that this isn't really important and adding too much complexity in the system just for these rare occasions is not a good idea, but nevertheless it's worth to give it a quick thought :)

The desire to do this is understandable - but it would prevent people from providing a better suggestion, too. Perhaps allow edits but put them under special scrutiny somehow?

This user has previously suggested an edit to this question that was rejected. Please review with extra care.

Like you said this sort of behavior is rare, you may want to just flag one of the user's posts and explain to a moderator what you're seeing, rather than altering the system to deal with an edge case. 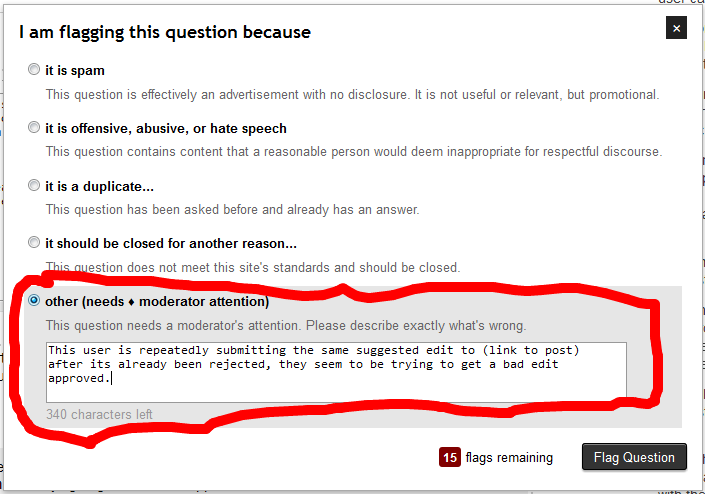 Not the answer you're looking for? Browse other questions tagged feature-request suggested-edits .

285
How do suggested edits work?
163
Do we need a 'reject and improve' button?
412
Decision on rejected edits should be displayed as a notification to the editor
345
Reject an already-approved suggested edit when rolling it back
145
Improvements to a suggested edit cannot be submitted when the suggestion is approved during editing
116
A way to “downvote” a suggested edit and affect both the edit suggester and reviewers
74
Can “Thanks for your edit!” banner be linkified with the Suggested Edit Link?
113
Rate limit suggested edits
302
Moderators should be able to manually ban users from suggesting edits