This idea was inspired by New Rep indicator stops when having negative score. Quick summary of that post: OP placed a bounty, decreasing rep by 500. After that, new rep increases were not shown by the top bar achievements indicator icon (until the OP clicked on it to view the details, which reset the calculation).

Apparently, the indicator is currently set up to show the difference between your current rep and what your rep was at the last time you clicked the indicator to view the details, but only if that number is positive (personally, I think we should Display lost/negative reputation in topbar achievements, but that's another story). So -500 rep from a bounty obscures all rep increases until 500 more rep is gained (or until the calculation is reset).

So my proposal is simply to adjust the calculation to ignore the effect of placing bounties. The rep change from placing bounties is really just an artifact of bookkeeping, and thus it doesn't make sense to even take into account for reporting positive rep changes in the achievements indicator.

Implementation of course depends on how the system is set up, but it seems like it would be a relatively straightforward task, however it works. There has to be something tracking the state of the indicator for each user. So when a user places a 500-point bounty, just adjust whatever is tracking their indicator state by the same amount. That way they'll continue to receive notifications about upvotes et al.

Don't deprive bounty-placers of the little dopamine rushes that seeing a green +X in the top bar provides. Hurrah for positive reinforcement.

As Richard Tingle points out in the comments, when the bounty is eventually awarded, that rep increase on the person who received it should definitely still be reported and included in the indicator calculation. It's just the loss of rep for placing a bounty that should not be included.

Agreed. I was surprised to see rep gains on one site this morning that I hadn't been told about, and finally thought to see if they were in the notification history even though it'd never lit up. Here's what I found: 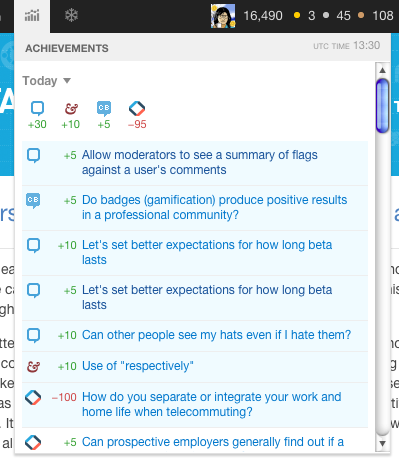 Upvotes on three different sites were masked by one intentional rep decrease. This is different from protecting users from the disappointment of received downvotes; I know full well I offered that bounty.

One might argue that with the current implementation I get a pleasant surprise when I happen to visit my profile on those other sites, but if that were a goal we wouldn't have the notifications at all.

+1. And not just bounties - I don't really need to be told about the -1 I get when downvoting an answer.

And just in case I misunderstood the question, it should still show the -500 in the dropdown when you click. It should just reset the timer after that so that new stuff is shown.

Not the answer you're looking for? Browse other questions tagged feature-request bounties top-bar achievements-dialog .

7
When I offer a bounty, I don't see upvote notifications
141
Help us identify micro-privileges for top users
147
Make voting activity on your posts available on site metas (what you would get from rep if metas had rep)
161
Display lost/negative reputation in topbar achievements
32
Is receiving the association bonus really a top-bar-worthy achievement?
27
New Rep indicator stops when having negative score
31
Deleted downvotes should appear in Achievements dialog
45
Why do reputation drops not highlight the Achievements icon?
9
Always show rep lost when downvoting an answer in achievements badging
3
Why are the green/red +/-N delta-rep notifications (due to votes on my posts) turned off until a -N bounty is surpassed?
See more linked questions