There are many questions that are closed which will never get edited and improved, simply because the thing that the user was asking about is not something that person can change. What's more, leaving unsalvageable content on the front page of a site isn't always best for its image.

One notable example is when users post programming questions on Meta Stack Overflow. Typically, these are deleted on sight. They don't get migrated because they're almost never good quality posts, and they won't get edited and improved because the user isn't asking about something that's even remotely on topic.

Basically, questions that are so off-topic that the user didn't have a clue as to what the site is really about can't be improved. It's not a matter of desire or how much involvement the community wants to have in trying to salvage the post, it's just that some posts just cannot be improved, such as this one where a user has an Ubuntu-related question on Stack Apps, the site for questions about the Stack Exchange API: 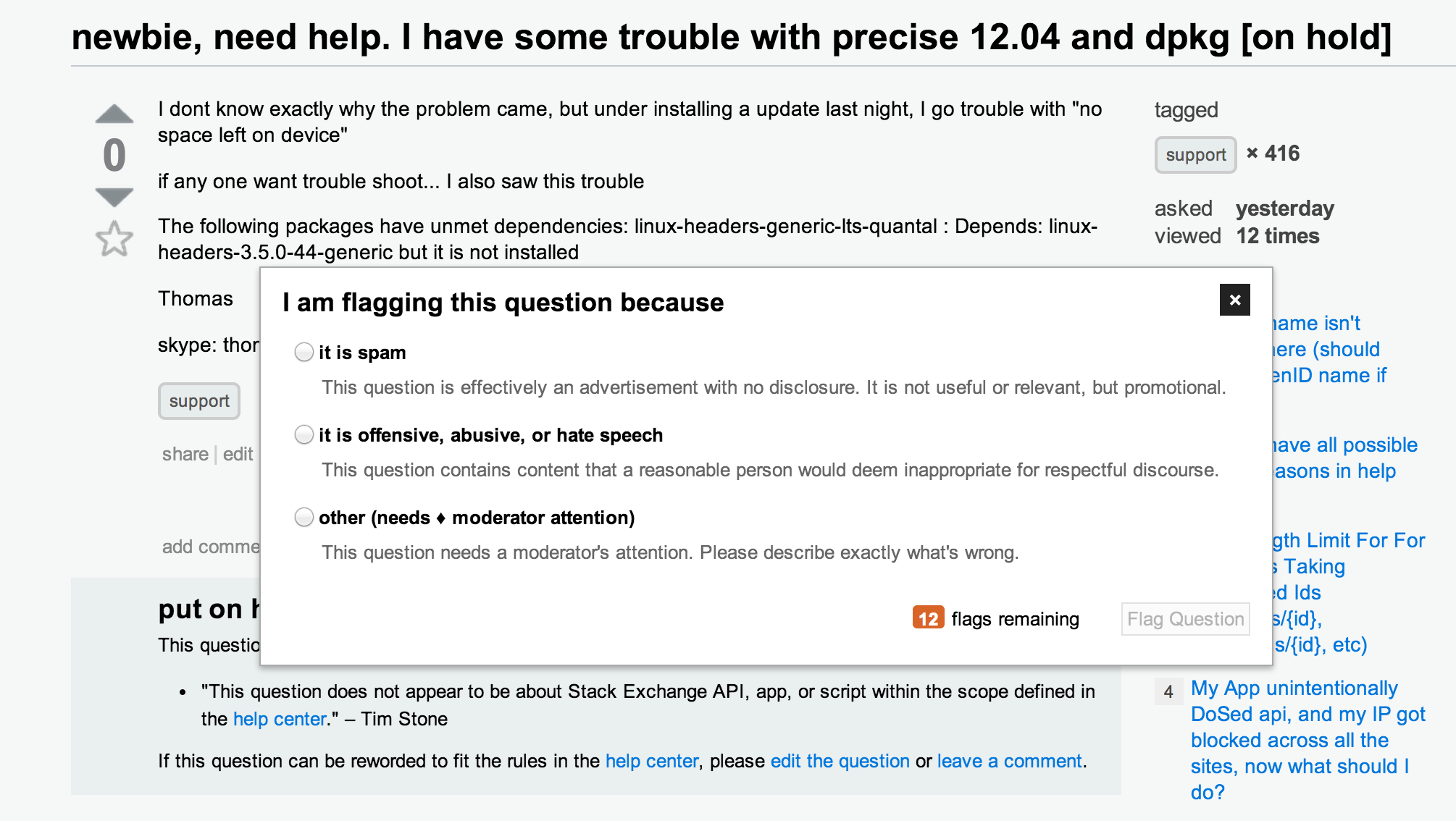 As you can see, my flagging options are limited to spam, offensive, and "other". Of course, StackApps has only one regular 10k user, so it's not like using the "other" option will create a heavy load for moderators, but on some active sites which teem with 10/20k users, using the VLQ flag option can help take a significant load off of moderators, since 10/20k users can cast delete votes to respond to those flags. Leaving unsalvageable content on the front page of a site isn't always best for its image, yet I feel a bit discouraged by having to use the other option in these cases, since these are typically things that don't require absolute moderator attention yet still require someone's attention.

Is it possible to bring this flag option back, at least for the off-topic close reason if nothing else?

I've always been a bit confused about this flag in regards to questions. The reason specifically states it needs to be deleted yet dismisses when the post is closed, like it's an avenue for closing when you don't feel like selecting a reason? Why should that reason have anything to do with closure? Isn't that what "recommend closure" flags are for?

Some things to work around this issue, which I can only refer to as a misuse of a flag reason:

This would make the process of deleting a truly crappy question from the site much easier, and emphasize to users that the VLQ flag is not a catch-all for a question that merely needs closed, since you would be forced to also recommend deletion in the queue.

Let's look at why this was removed from closed questions:

If a question really needs moderator deletion it can be flagged with a custom reason stating why it should be obliterated. Otherwise people with enough rep can simply vote to delete it later. -- ThiefMaster, moderator on Stack Overflow

Yes, please. Almost all of these flags are useless in light of the accelerated question deletion process for bad closed questions. These don't require moderator attention, and frankly many of them look like they're from people hoping to farm helpful flags for badges and the like. – Brad Larson, moderator on Stack Overflow

Stack Overflow has easily the largest number of 10K and 20K users on the network. And yet, they couldn't keep up with these flags and the moderators on the site found themselves daily handling VLQ flags on closed questions. One of the moderators even wrote a script to detect this scenario, so that he could clean these pointless flags out with less effort...

But the redundancy created by that "accelerated deletion process" wasn't just a happy accident; it was the very reason for its creation:

This goes beyond just VLQ flags, of course - it also lifts a huge burden from the mods and 10K users who would otherwise have to find and then vote to delete these. But let's look specifically at VLQ flags...

During the month of October, 2420 VLQ flags were marked "helpful" when the flagged questions were closed on Stack Overflow... Of those, 2076 were later deleted. Here's how that breaks down:

That's right - question authors did more to clean these up than moderators and 10K+ users put together, with Community handling the bulk of the effort.

What about those other 344 questions that got closed but not deleted? Well, those were closed as duplicates, or had up-voted answers, or got re-opened, or simply ended up scoring > 0. In other words, they attracted some signal that hinted they might not be as terrible as VLQ would imply. That's not to say they won't still end up deleted eventually (or that they shouldn't); simply that the need for timely removal isn't so great.

As for getting ugliness off the front page of the site, you do have a few other options:

Not the answer you're looking for? Browse other questions tagged feature-request flags low-quality-posts .

912
Show all of my question/answers to me even if they are deleted
95
Is the Very Low Quality flag too ambiguous?
48
Is the “very low quality” flag necessary?
1173
Don't throw away all votes when a user is deleted
17
How should off-topic questions be flagged when no off-topic reason from the dialog applies?
431
Should Stack Exchange in general be awarding “A”s for Effort?
295
Add optional box for spam flags letting you say why you think it's spam
409
Can a machine be taught to flag spam automatically?