Take a look at this: (no bragging just focus on the part in red circle) 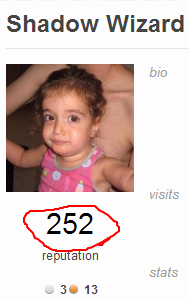 This is not the ordinary cache here, it's like that for long months now.

This made me curious, then furious and finally vicious so I went bug hunting. Here is my story.

Once upon a time, a protocol for sanity has been put on the table. One of its immediate results was:

if you’ve contributed something worthwhile to the site, you should keep the reputation for that even if it eventually gets deleted. “Worthwhile” here is defined as,

Awesome! And indeed, on http://movies.stackexchange.com I had a question which had score of more than 3 and was visible for more than 60 days before getting deleted. The reputation I gained from it is preserved in all places... except my network profile reputation graph. :(

I thought to myself "209? Let's prove that's the reputation I have if using the old rules". So I had.

Can the network profile reputation graph follow the same rules as the rest of the reputation calculations?

8
Consistent difference between network profile reputation and reputation in the site header
124
Community-led deletionism: a protocol for sanity
1
Activity page is blank