Programmers has picked up a bit of a reputation as of late. We've done our best to shed the remaining issues from the NPR1 days. And we're fortunate to have users who focus on maintaining the site's high quality content, and who move quickly to get rid of the cruft. Heck, we even invited Undo to unleash his stale comment sleuthing program against the site. And in the spirit of full disclosure, some of us use our delete votes as a little bit of therapy - blasting away the electrons that just don't need to be there.

But lately, we've noticed a bit of a problem. Not a huge problem like collider questions attracting poor quality answers. Or even an issue like our close review queue not getting enough reviews2.

No, we have a problem with the background tone to indicate a question has been deleted.

Take a look at Exhibit A

The background shade of pink (purple? red?) is ... merely functional. It's certainly clear that something has been deleted. But it just doesn't feel like it's enough.

Now take a look at Exhibit B 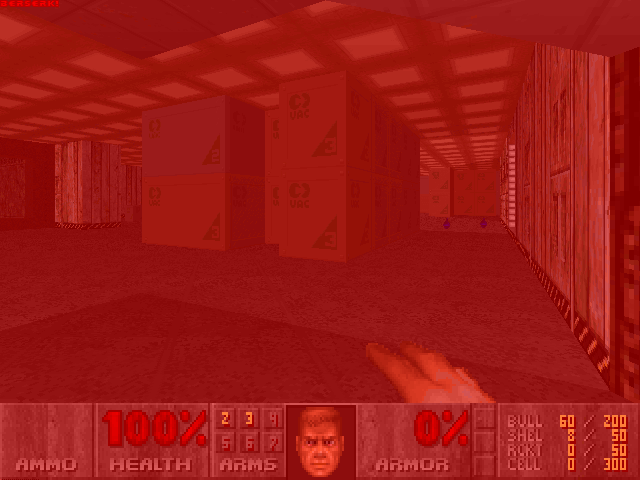 Here we have something where we know it's different. It's dang near impossible to miss. The background color makes it clear something is different.

When discussing this over on The Whiteboard, one user expressed the need for change pretty eloquently.

I want it to be red, like dripping blood. After N hours, the color of the deleted background should be a dark reddish brown... like dried blood. I want to hear the scream of the bits as they get sent to /dev/null never to be seen again - please include a .midi file of this when viewing a deleted question

I understand that sort of animation might be a little difficult to pull off. So perhaps a gibbed aftermath version of deleted posts would suffice to convey that something was wrong with the post and it's now rightfully gone.

And if even that's too much, then how about a deeper shade of crimson? And maybe some brief fireworks for the person who casts the final vote-to-delete?

The benefits of this change should be obvious, but for the sake of being a pedantic programmer (oxymoron, I know):

1 Not Programming Related
2 We'll still happily take more close votes like SO has if that's possible. Just saying.
3 We would happily take fireworks when casting the final close vote too.

Goes in the right direction, but not far enough.

We need a mod for Counterstrike or whatever people play these days that can pull almost-closed questions through the API, populate the playing field with them, and cast the final close vote for every one that the user manages to shoot: 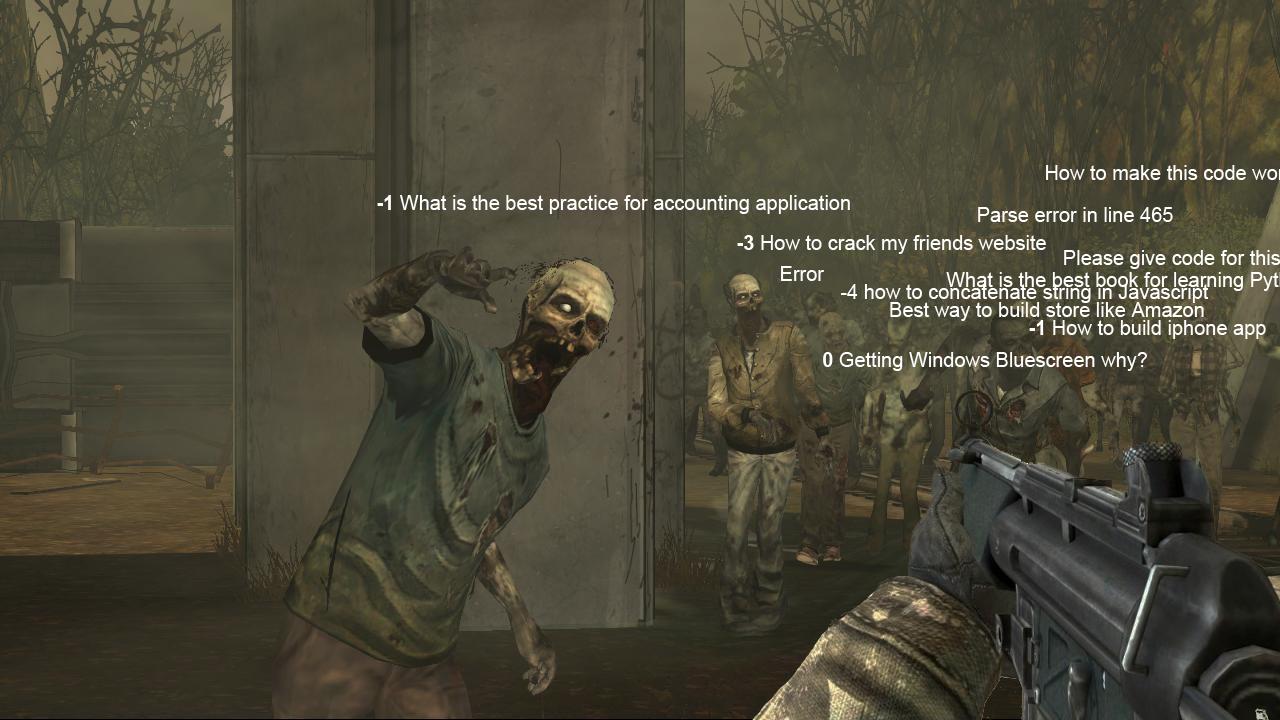 As a Programmers moderator, I fully support this. And while we are at it, the mod menu could use some love:

To put a bit of perspective on this, Programmers gets somewhere around fifty thousand unique visitors per day. 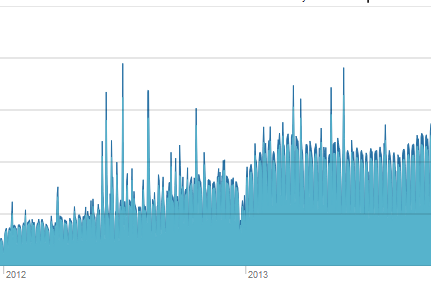 There are less than 100 user accounts on Programmers that have sufficient reputation to see deleted material. I'm fairly certain that all of those folks understand the context behind those deletions, and have no need for an additional visual cue.

So the goal of hiding deletions being a reputation requirement already serves its purpose; those folks who haven't been around long enough to understand the context behind the deleted material never get to see it.

As a Programmers moderator, I fully support this. And while we are at it, can we add sound effects to moderator tools? For example, a taser when we suspend a user. Or a gunshot (perhaps with the "BOOM! HEADSHOT!" effect) when we destroy an account. A jail cell clanking shut when a question is closed as well.

The current answers are great, but don't address the fact that as a Programmers user still a little bit under 10k, I would like to participate in the gamification as well, as I'm sure many other users would too.

Of course, I don't want to upset the privilege system currently in place, but as a small nod to those of us who haven't reached 10k yet, could, in addition to the original proposal, the 404 page for deleted posts be altered with to include a nice, dynamic, action-packed deletion graphic of some kind? Ideally one that ties in to the new background added as a result of the original request.

This would serve to incentivize people to reach 10k, as well as to subtly prepare them psychologically for the frenzied bouts of blood-letting destruction they would be expected to perform.

I am fine too, thank you.

How's about something appropriate to our nearly cybernetic totalitarianism? 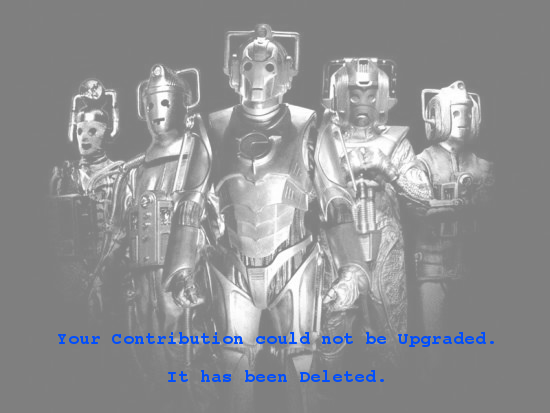 As a follow-up to identify the serious value contained within a lot of the fun from this question...

The Programmers theme is meant to be more understated that some of the other sites - reflecting a much used whiteboard (that is unless I've missed what @Jin was aiming for completely).

While it works OK for regular use, I agree there should be more contrast for deleted posts. I'm not sure I'd go as far as the "dripping blood" idea, but anything less pink screen would be great.

I was going to say sound effects would be an issue at work - but I don't have speakers so that's not a problem at all! 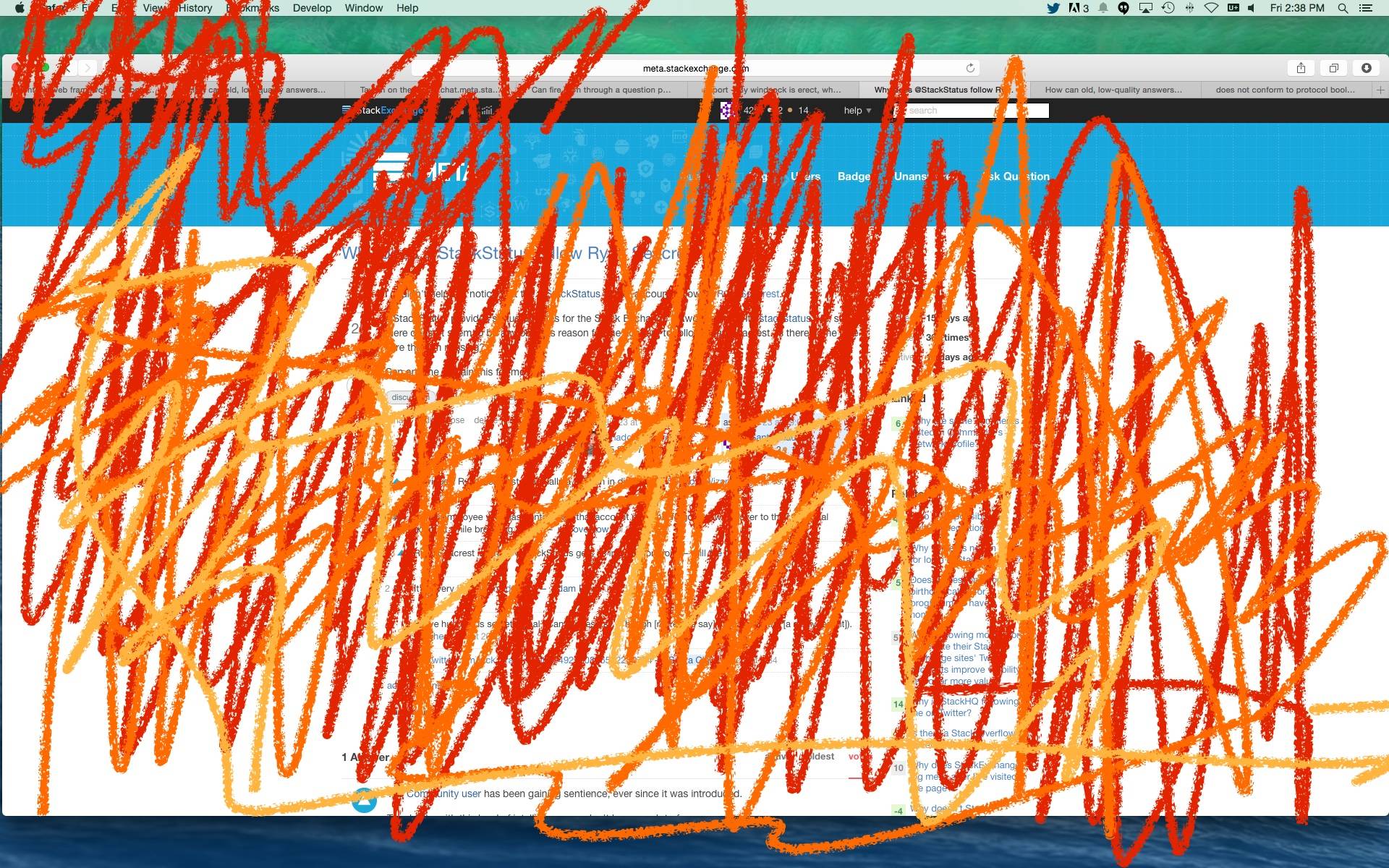 98
How can I encourage Stack Overflow to rein in the 'subjective' vigilantes?
14
Is the automatic question deletion routine broken?
34
On-hold questions should have on-hold music
20
New queue for moderators: questions that appear stuck in close votes review at SO
-2
Can fire burn through a question page if the question has been deleted?
-2
why are the best questions the ones which have been closed?

963
Show all of my question/answers to me even if they are deleted
499
How does deleting work? What can cause a post to be deleted, and what does that actually mean? What are the criteria for deletion?
1235
Don't throw away all votes when a user is deleted
44
Treat comments on deleted posts from moderating users like comments from diamond moderators
289
Let's stop displaying a user's accept rate
404
Add an "I don't understand" option for review audits
16
Deleted posts could create confusion for colour blind users; is there something to be done about it?
305
Goodbye, Prettify. Hello highlight.js! Swapping out our Syntax Highlighter