Regarding Potential Duplicates: I saw this question, which got closed as a duplicate of this question, which in turn has an "accepted" answer, but doesn't answer the question (or, the answer was revoked). So, there still seems to be no thread keeping this issue open for continued discussion or waiting for a viable resolution. There may be other potential duplicates I may have missed, however.

Today wasn't the first time I failed an audit, wanting to learn more about why a question got VTC'ed. I've failed audits by accident before too, so I'm not too torn up about having failed(—although, as the person running the SO Close Votes Reviewers chat room, it'd be pretty ironic if I got banned from those reviews :-)—but I am uncomfortable that the current system fails an auditee who clicks a button which normally functions to display more information (not cast a vote). It's as if normally, it's a Close... button, and during an audit, it's a Close button—and that makes a difference. 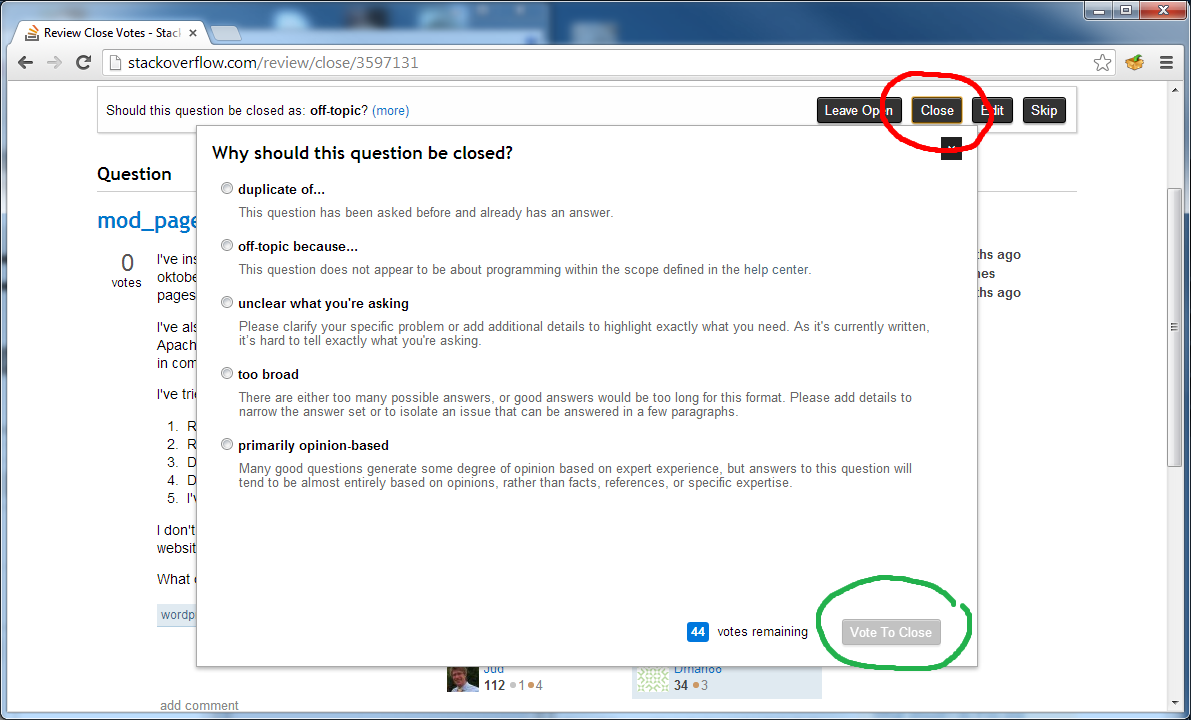 Preempting those who'd say that one shouldn't need information about what others are doing to make their own judgment, I don't completely disagree. But, between (1) the bias that the lightbox might cause (which, we're supposed to trust users about, as answered in the linked question) and (2) penalizing the thoughtful and the curious for wanting to know more, I feel the greater evil is the latter. (Besides, why not just show no votes, as if it were a freshly flagged question? Or, if these are pulled from real examples, just show one of the votes that was originally cast.)

Precisely because I'm always skeptical of what I presently know, when I see something that doesn't make sense, I want to find out more. When I see a question that seems just fine, I instinctively click Close, hoping the subsequent lightbox might shed some light on things, or teach me something new:

I use the lightbox to make many judgments about how to review a close vote, and especially whether to leave a comment and what if so. I think it's healthy that a user should attempt to investigate the context in which a question was VTC'ed. Alas the current system discourages that curiosity. I think it's inconsistent that the Close button should mean different things in practice, and during an audit.

I understand the position regarding the audits judging you on your first instinct. It does feel wrong as we are trying to catch people who vote without providing any thought into their actions. However, using the close dialog to help you decide how to vote basically means you aren't sure how to vote and need help to decide. And if you need to view the existing close votes to help decide then you shouldn't be voting on that post.

The Should this question be closed as: message at the top of every close review question should tell you want you need to know about the existing reasons. You might not see counts, but you'll see what different reasons other users thought the question needed closed as. That alone should be sufficient to help you judge most questionable questions, especially the pesky unknown duplicate.

But to address your specific concerns:

Is there a more specialized site for this question that I haven't heard of?

The only time this should be a factor is if the question is already off-topic. Migration only should occur when the question is a quality post that is off-topic on the current site. So that means if the post is on-topic, then it doesn't matter that there is a more specialized site. You don't need the close dialog to tell you how to vote here. If you think it might need migration, then the question already needs closed.

Is there some other, subtle reason I'm not yet aware of that this question should be closed?

If it is that subtle, then seeing the close votes themselves isn't going to tell you anything new. The existing comments will be a much better source of information. Seeing a [1] next to "too broad" isn't going to give you any information on a subtle reason.

I think there might be valid grounds for closing this question. But with the advent of so many new, long-descript close vote reasons, I need to go over them again to know for sure whether I'm doing the right thing.

Even though the close reasons changed, the reasons for closing haven't. The new reasons just help clarify the close messages for the original poster. If you decided to close the question and need to know which solution might be best, that's fine, but you would have failed an audit regardless of the reason since you decided to close the question already.

Was a code sample missing previously, but filled in later? If yes, then I want to see how many off-topic votes this question received, because if it has, say, 3 such votes, and the question seems useful, I'd comment, "This question has been improved and should no longer be closed for its initial reason," to fend off its impending doom. (It only takes one more user—tired and on autopilot—or predisposed to bandwagoning—out of all exposed to the question until the votes expire.)

This one is tough to argue as you are trying to be helpful, but if you see a question with close votes and you don't agree that it should be closed, why do you need to see the specific votes to decide to leave a comment. You can just as easily view the revision history of the question and make a decision based on that info.

I think this is one of those questions asking about objective differences (not opinion-based) between the internal workings of two comparable "software tools commonly used by programmers," which is a valid question. But with the popularity nowadays of closing such questions as being about "a tool, library, or favorite off-site resource," I want to leave a comment explaining the difference to future reviewers. So let's see, how many people voted to close for that reason? (Or, was this question voted to close for something else entirely that I've missed?)

Viewing the existing close votes in order to leave a comment to future voters is not a bad idea per say, but if a future voter isn't going to make up his own mind on how to vote, a comment isn't likely going to sway them, so it seems to be a fruitless effort.

The last to items that I mentioned (I intentionally address them out of order because the last 2 were the most borderline) are the best arguments in my opinion, but I think those are limited applications and don't justify the developer time to invent a fake close dialog for audit questions.

Not the answer you're looking for? Browse other questions tagged discussion feature-request vote-to-close review-audits .

539
How about a “Vote not to close” option to counter the “Vote to close”?
849
Can we have the ability to retract a close vote before it closes?
1463
Fastest Gun in the West Problem
1813
Could we please be a bit nicer to new users?
1230
Don't throw away all votes when a user is deleted
402
Add an “I don't understand” option for review audits
2781
A Terms of Service update restricting companies that scrape your profile information without your permission
2453
Firing mods and forced relicensing: is Stack Exchange still interested in cooperating with the community?
2155
Stack Overflow is doing me ongoing harm; it's time to fix it!