I seem to be constantly confused by how the reputation system works - just when I think I've worked it out, something else crops up that confuses me further.

My understanding is that the following things do not count towards reputation cap:

However, as you can see from this screenshot, I have capped at 235 reputation: 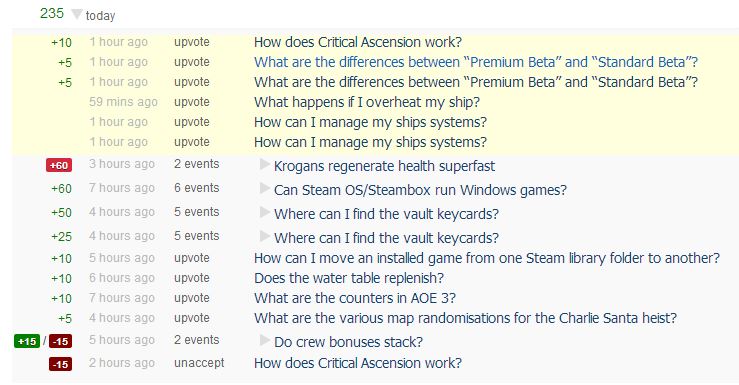 What happened here is I've had a bounty for +50, and an unaccept for -15, which fair enough, would under normal circumstances equal 235 reputation if I had already capped at 250 reputation - but I have received a bunch of upvotes afterwards which have not taken any effect against my reputation, and since unaccepts and bounties don't affect your reputation cap, I would have expected my reputation to have capped out at 250 again regardless.

What am I getting wrong here? Do bounties and accepts/unaccepts actually factor into the reputation cap?

Your cap never changes, you did not cap at 235, you caped at 200 then you got an additional 50 for the bounty and lost 15 points from that.

If you had not gotten the bounty then you would have lost points unless you later got points putting you over 200.

The cap only applies to question up- and downvotes, you get at most 200 points for those.

Accepts and un-accepts count separately, as do bounties. This applies to negative changes too. You gained 200 points from upvotes, you gained 50 points from a bonus, and you lost 15 points due to an un-accept:

The same logic applies to placing a bounty; the -50 for a 50 point bounty would not be recoverable by additional upvotes.

Succinctly, the unaccept (as accepts) does not count toward your reputation cap for the day.

The cap takes effect at 200 positive reputation from votes, which excludes bounties and accepts. Let's start with that: +200 from upvotes. Then, the unaccept counts -15, bringing the total to +185. Then, you had a +50 bounty, totaling +235 reputation.

Not the answer you're looking for? Browse other questions tagged support reputation bounties accepted-answer daily-reputation-limit .

559
How does “Reputation” work?
723
Six simple tips to get Stack Overflow reputation fast
30
Different colors for different rep types in the new reputation graph
10
Mortarboard badges being awarded as a result of bounties after recalc
533
Recent Reputation History Changes
823
What does “user was removed” mean and why did my reputation change because of it?
3
Showing unaccepts for answers?
91
Changes to bounty rules: removal of double rep-retention, blocking of owner deletion