While using the mobile site on my Android phone, I saw a comment that I wanted to flag but there was no flag button. After searching, I saw this answer that says flagging comments is not supported on mobile site.

Could the ability to flag comments be added to the mobile site?

It seems that all that's missing from the mobile view is the actual flag link: if you use developer tools to inject an <a class="comment-flag"> element somewhere inside the comment row and click it, a seemingly functional flag dialog pops up. (I haven't actually tried to submit an actual flag that way, but I see no obvious reason why it shouldn't work.)

Thus, it shouldn't be hard to write a user script to do this — the only problem is the lack of user script support in mobile browsers (Tampermonkey browser notwithstanding).

(In fact, the reason I noticed this is that the code SOUP uses to work around this issue is currently (v1.8.0) missing an isMobile check, and so ends up injecting (somewhat ugly) flag links into the mobile view for any comments that you've upvoted. I'll need to fix that, but I thought this would be an interesting observation to mention, even if it's not as practically useful as it might be if more mobile browsers supported user scripts.)

Update: Now that Firefox for Android can run the SOUP extension (as well as other user scripts via Violentmonkey), using a user script to modify the SE interface on mobile devices has become a lot more practical. Accordingly, as of version 1.50, SOUP contains a fix for this issue. Here's what the UI looks like (as of SOUP v1.52): 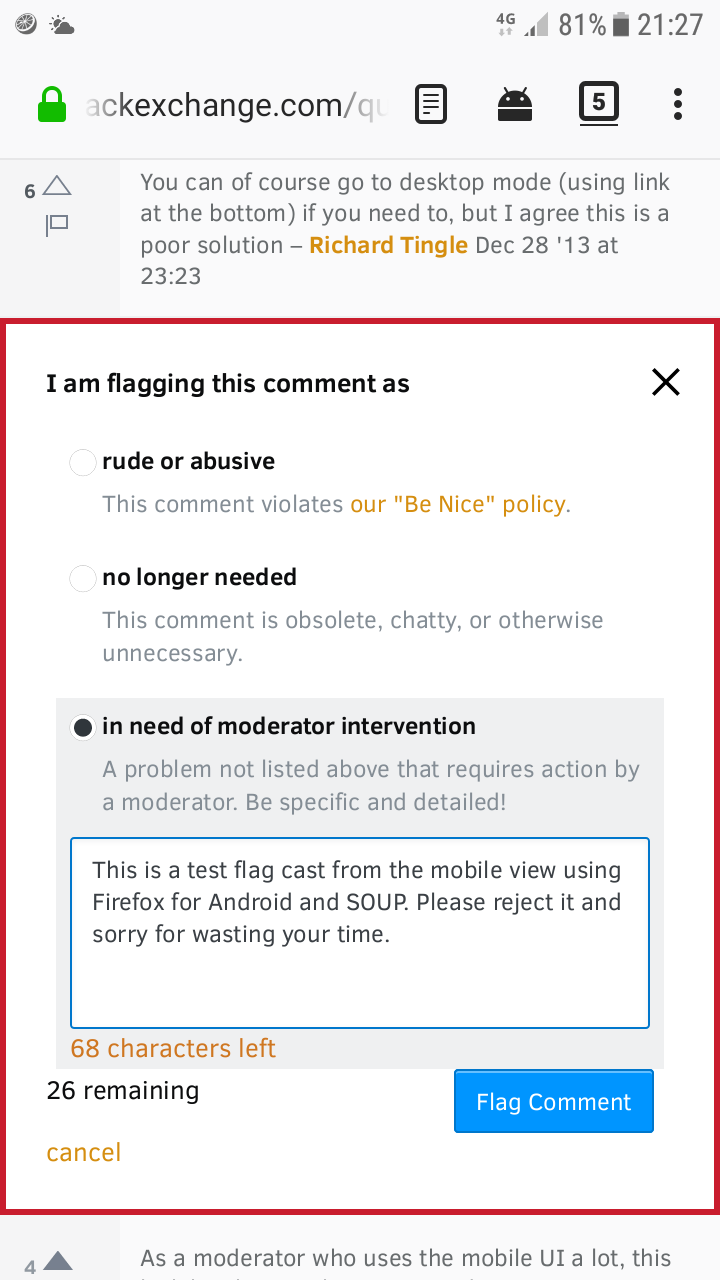 (Ps. After casting that test flag, I discovered a minor cosmetic bug: the fancy SVG flag icon turns into the word "flag" once the dialog has been submitted. I'll fix that in the next release.)

Not the answer you're looking for? Browse other questions tagged feature-request mobile-web comment-flags .

1
An option for flagging comments in mobile view
220
Allow flagging a comment after upvoting it
35
How do I delete or flag comments using the mobile website?
4
Vote on comments in iOS app and mobile app

1222
Encouraging people to explain downvotes
385
Send authors an inbox message if their question is closed
35
How do I delete or flag comments using the mobile website?
220
Allow flagging a comment after upvoting it
1245
Don't throw away all votes when a user is deleted
418
Add an "I don't understand" option for review audits
263
Let's hold language in comments to the same standard as posts
215
Deprecating our mobile views
23
Flagging comments on mobile is impossible unless you previously switched to desktop view prior to mobile site removal