“That's not what the comments are for”

I have been informed in the comments at carry over user entered carriage returns from message box and sent in email, that I shouldn't use the comments to inform posters about why I made the edits I made.

In particular, I used

I have edited your title. Please see, "Should questions include “tags” in their titles?", where the consensus is "no, they should not".

So, I'd like to find out what [meta] thinks about this. Am I abusing the comments?

Since the comments have now been deleted, here is a screenshot: 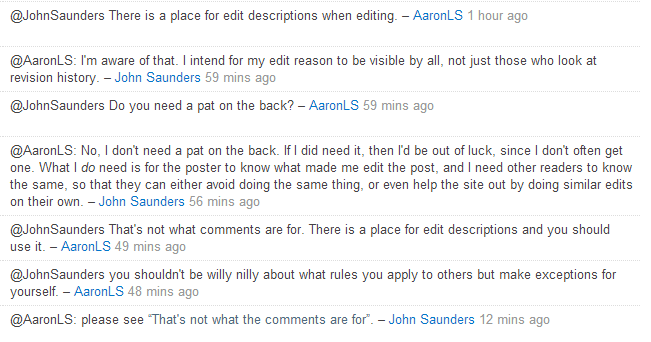 I just came across an example of something, but I'm not sure which.

I just came across a question with both a "appreciated", and a signature, edited them, and left my comment. The comment app I use displays how long the user has been on the site, and I noticed that this user had been here for four years.

This made me look at the user's questions. Every single one of them had a signature, "thanks", "appreciated", or "tags". Every single one. Yet I had apparently managed not to notice them for four years.

I don't know if this is proves

I don't have a problem with using comments in the way that you use them.

I have used comments in the past to inform the OP of an edit and why I made it, just as your standard comment for removing the tags from the title. The comment is directed specifically at the OP for the purposes of education.

My opinion is edit descriptions should describe the edit and what was done, and if room, maybe a brief explanation as to why. This is there for reviewers (which you don't need obviously) and for future reference. There is not enough room in the edit description to provide the level of education that is necessary for some specific edits (not to mention that the OP rarely will read it)

Personally, I don't see an issue with such comments.

Instead of just the OP seeing why an edit occurred, others benefit from explicitly seeing both that a post was edits and why it was edited (and implicitly how it was improved).

This helps with teaching new users as well as the OP.

Frankly, seeing "That's not what comments are for" brought to my mind the question - what are they for then?

280
Should questions include “tags” in their titles?
29
Are comments a good place for someone to keep cut-and-pasting grammar advice?