Ask Question
Asked 10 years, 4 months ago
Active 7 years, 5 months ago
Viewed 1k times
6
As it currently stands, this question is not a good fit for our Q&A format. We expect answers to be supported by facts, references, or expertise, but this question will likely solicit debate, arguments, polling, or extended discussion. If you feel that this question can be improved and possibly reopened, visit the help center for guidance.
Closed 7 years ago.

The Woot! Enthusiast and Fanatic badges are awarded to users who manage to log into one of the sites every day for 30 and 100 days straight, respectively.

We have already seen that this is easy to accomplish, either through sheer user addiction or through the use of simple scripts that automatically bring up the website each day.

What I am interested in, however, is how complex you can make this process.

In the spirit of famed cartoonist Rube Goldberg and his overly complicated machines to perform menial tasks, I bring the challenge to you, the Meta community. 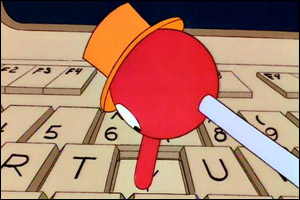 Do people count as Rube Goldberg machines? If so, I submit myself...

Well, I am on MSO right now, so I'm clearly not working.

Oh, I got all kinds of complicated!

Did you not just hear me? I said "Done!"

Let's take another pass at it. I think a proper solution has to have maximum scalability and uptime, and since we're talking about the web here, should also be easily portable and made cross platform.

In order to make absolutely certain that the client software will communicate with the ASP.NET web service (because you never know when Microsoft will sneak some kind of anti-competitive monopolistic time warps into their WSDL), the client software will also be written in .NET. It will be a very simple command-line utility, running on my work PC, as I no longer have a home PC (just the Mac).

You and I both know we can't trust all this Microsoft technology. So this will all be spawned by the following process on my MacBook, via a cron job that kicks off a shell script:

The cron jobs will be spaced out by 10 minutes to ensure that they don't conflict with each other.

Hey -- infinitely scalable, service-oriented, with the potential for cross-platform clients. What could possibly go wrong? :)

When I get home and find feces everywhere, I get very angry and sad and begin beating the living snot out of the monkey until it's dead. Once the monkey is dead, I become very lonely and need to purchase another monkey. Not knowing where one buys a monkey (and being so torn with grief that I can't remember where I purchased the last one), I fire up my browser, one of whose home pages is stack overflow.

Bottom line: As long as one shark dies from laser beams every day for 100 days, I become a fanatic of the site. Only drawback? A house that continually smells like feces. However, that's something that every fanatic deals with, so I shrug it off as coming with the territory.

I'll bite. What the hell, I have so little rep here to worry about losing anyway. :)

I have a simple, NOT Rube Goldbergian solution that (I hope) will work for me: Four icons on my iPhone, one for each of the SOFU sites + Meta. I make sure to hit them each once in the morning before work, and once in the evening closer to bedtime. (Not sure when the days hit my time zone. Yes, I could easily figure it out, but who cares.) This makes sure I hit each site at least once, in case I can't do it at work, and especially on weekends.

Now that's what I actually use, in addition to real activity.

Here's my Rube Goldbergian solution that for S&Gs I might actually try to do:

(Can you even start a GUI app as a daemon on Macs? Never tried anything that jacked up before. Mostly because it's a really jacked up idea.)

Somebody did make a script:

Not the answer you're looking for? Browse other questions tagged discussion fun activity-badges .

8
Does access via the API count towards Fanatic and Enthusiast badges?

1384
Fastest Gun in the West Problem
795
The Many Memes of Meta
1
Change fanatic/enthusiast badge to count more than just a page visit?
4
Does visiting chat count towards Enthusiast and Fanatic?
1600
What is the XY problem?
26
Get rid of the “consecutive days” requirement
22
Why are the Fanatic and Enthusiast badges not earnable more than once?
402
Can a machine be taught to flag spam automatically?
2173
Firing mods and forced relicensing: is Stack Exchange still interested in cooperating with the community?