Low-rep users can't leave comments. This leads to many users posting their comments as answers.

While the rationale behind this limitation is understandable, seen from the outside, it looks inane and bureaucratic. New users often have useful information to bring to the table. That information is often enough destroyed through deletion, or has to be manually converted to a comment by a moderator.

How about, experimentally for a month or so, removing the limitation, allowing comments from (registered) new users, and countering the threat of garbage comments with

After all, features like anonymous feedback show that there's value to be gained from the input of the countless visitors who end up on Stack Overflow through Google, but are never going to become active members of the community. So why not use it?

I'm strongly against this idea. (At least not without comments aging away with no interaction which hasn't been popular previously).

Even if there's a limited trial and the outcome isn't just pain, Stack Overflow is about Questions and Answers. The bottom line is we want good questions and good answers not comments and that's a message we rightly emphasize from day one.

Let's not spend dev time when there are other cool feature requests begging for it and not waste reviewer time when it's clearly in great demand already.

Please, let's stick to doing Q&A well, not descend into the quagmire of awful "me too" and "same here" comments which say less than the original post that the rest of the Internet is drowning in --- that's part of what makes this format so great.

I'm still concerned about the potential of a massive backlog in the proposed comment review queue.

The last time an idea like this came up we had approximately 1,642,000 users with less than 50 rep. and I still think if each one of them posted one comment that went into a review queue we would have a massive problem.

I'm guessing that if we opened up commenting to new users and dumped all of those comments into a review queue, the queue would fill up fast, really fast, faster than reviewers would likely be able to keep up with.

If the backlog grew well into the thousands, and I wouldn't be surprised if it did, it would take quite a while for a comment to reach its intended destination and with comments being transient in nature, I doubt that many of the comments would still be relevant days or weeks later.

For those that have doubts about the number of comments creating a significant backlog, here's some data: 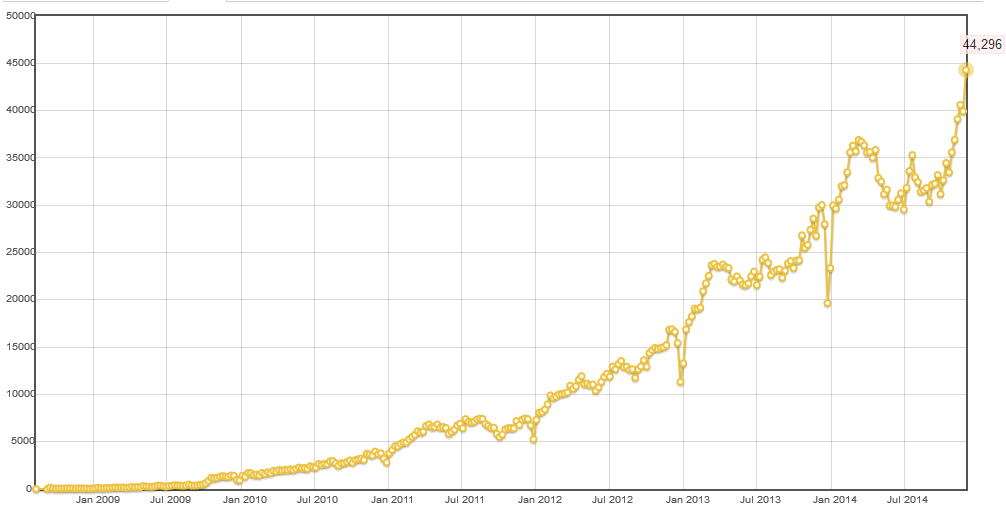 That's just comments from users with less than 50 rep commenting on their own posts each week... Imagine how big that number could get if we opened the flood gate.

SE tries to optimize for pearls not sand. A review queue for comments would seem to ask users to sift through sand, and look for better and worse qualities of sand.

I think there is value in the idea, and now that we have review queues (which didn't exist when the comment feature was devised) you can have a multitude of users reviewing comments for appropriateness, and flagging ones that aren't. Maybe you can even consider a short term "comment" ban for low-rep users who have a high rate of comment deletions due to inappropriate comments.

But I am concerned removing the limit for just a month is just going to cause confusion, because if we decide that the rep-less commenting is causing more harm than good, and we roll it back, you are going to have a lot of lower rep users get used to the ability when we take it away.

A longer period of time for the test would solve this problem as most of the affected users would hopefully achieve the 50 rep limit and won't miss it, but another alternative would be graduated test over several weeks (or months). Initially, we can start by dropping it to 25 rep, then 15, 10 and eventually 0. We can assess the "damage" at each step and make a decision if to move forward with the next step or if we need to stop and watch it for a while longer, but unless there was serious damage, we don't roll back to the previous rep level,

Not to be a broken record, but the main reason for keeping new users from commenting is that their comments are vanishingly unlikely to be useful. In order to comment (as opposed to answer) you need to establish:

New users (those with less than 50 rep) tend not to know this. They don't know about tagging, they don't know about dupes, they don't know how quickly or slowly things move on a particular site or in a particular tag. Yes, you may know a counter example who read for weeks or months and came to learn our entire system without ever asking or answering anything, but rules are not made for counterexamples, and that learner could have tossed off 25 edits during the journey and would be comment-ready by so doing. Folks who Googled for their problem, then followed a few links and are now wondering if they could possibly answer a question, but want to comment first for clarification, are simply not comment-ready. Telling me they really want to comment changes nothing.

I've said this before and I'll continue to say it every chance I get. And as I have said before, the complaint that no questions exist that can just be answered without commenting is utterly and obviously untrue. We all found some didn't we?

One of the main arguments that has been made against this so far is that comments wouldn’t be reviewed quickly on sites which already have review backlogs. But as far as I can see, this applies only to Stack Overflow and a few others. Thus, why not leave things on those sites as they are and test this feature somewhere else? (Moreover, since empty review queues correlate with the effort required from users to reach 50 reputation.)

Apart from the workload of implementing this, the only potential negative side I acknowledge is the risk of “teaching” users to use Stack Exchange the wrong way. On the other hand, one could argue that the current system teaches users to post comments as answers or more generally to misplace content. And let’s not forget that a proper review can teach users what is an appropriate comment – something that we hardly teach users right now. Moreover, there is little incentive for leaving useless comments.

As with the proposed triage system, one could think about letting comments go live only after review.

So, why is this worth the effort?

As a bonus, the same queue could also be used to allow users reviewing comment flags, something that is restricted to admins right now. This might drastically help keeping the comment sections clean.

I am in favor of status quo (commenting is a 50 rep privilege).

Mainly for these simple points

As a new user I think something should be done with the reputation cap for commenting. I mean, yea you run the risk of a bunch of new users commenting the pointless "me too" thing. I've been on this site a week now, and I've run into questions where I can't give a complete answer, but I do have some info that might help, which is what I have seen comments used for, for the most part. Yea the site wants quality questions and answers, however comments do have their place in that system.

It's part of the basic functionality of the site. Personally I think it should be a privilege you can lose, and not one you have to earn. My thought process for fixing it is to start users out with enough rep to comment, maybe coupled with a lower comment reputation requirement. However that leads to other balance issues, like proxy voting. Hell, even just matching the up/down voting requirement would make a lot more sense in my mind.

I usually hang out on the philosophy board, and they are pretty understanding of that fact, and usually don't downvote the newbie who is just trying to contribute. As long as I give that warning of a partial answer. Also a good number of times people will have already answered the crap out of a question, and you just want to throw this little tidbit out there to add to their answers.

There is my two cents as a new user. The devs will do what they think is best for the site.

I think we need the opposite: we need to make it harder for newer users to leave comments. Most comments left by new users on their own questions, which do not require 50 reputation, should instead be edits of their question.

54
Allow anyone to comment but hide low-rep users' comments until reviewed
-24
Don't require 50 reputation for commenting on questions
85
Anonymous user feedback now in testing
91
Let's have an explicit triage system for questions from new users
39
Can we make clearer to new users that rep barriers aren't meant to be worked-around?
27
Post Feedback link is broken
12
Are feature tryouts practical on Stack Overflow?
5
Is an answer that's really a comment better than a comment? (aka let anyone post comments on questions regardless of reputation)
-15
Consider: Users with 50 reputation in any of the SO sites should be able to comment everyone in all of the SO sites
15
Add 'Change (answer) to comment' option to review page
See more linked questions

342
Allow downvoting comments
292
Let's stop displaying a user's accept rate
54
Allow anyone to comment but hide low-rep users' comments until reviewed
63
Make community comment moderation a more public process
112
Did You Know... that 10k users can see deleted comments?
189
Can we raise the bar for reputation for late answers to bypass the review queue?
263
Let's hold language in comments to the same standard as posts
30
Allow low-reputation users to delete comments that were posted on their behalf