Will I be notified if my downvotes are reversed for serial downvoting?

From time to time, I look at the profile of a user who's posted something crap, done something I think is inappropriate, or otherwise annoyed me. If I see that they have a history of posting rubbish, I'll tend to click through and downvote much of it. (Of course, I don't downvote decent contributions out of spite - even if I don't like the authors.)

As far as I know, what I do is allowed, but I worry that one day the serial downvoting script is going to consider me evil and reverse my downvotes.

If this happens (assuming it hasn't already), will I be notified, or do serial downvote reversals happen without informing the downvoter?

There is no notification at all, only an entry in the reputation history of the target user. The only notification that can happen is a moderator contacting you or even suspending you if they consider your voting patterns to be abusive.

You generally should avoid going through the profile of a user and look for crap to downvote, you're very likely to trigger the vote reversal script that way. While you're still voting based on the quality of the post, you're also targeting a specific user which is far from ideal.

Contrary to the answer by Mad Scientist that I accepted here years ago, you will receive an entry in your reputation history if your serial downvotes get reversed. I discovered this recently when I downvoted all 4 of the posts of a bot that was posting plagiarised code samples as answers.

The reversals will show up as "undownvoted" in your reputation history, as shown in the screenshot below: 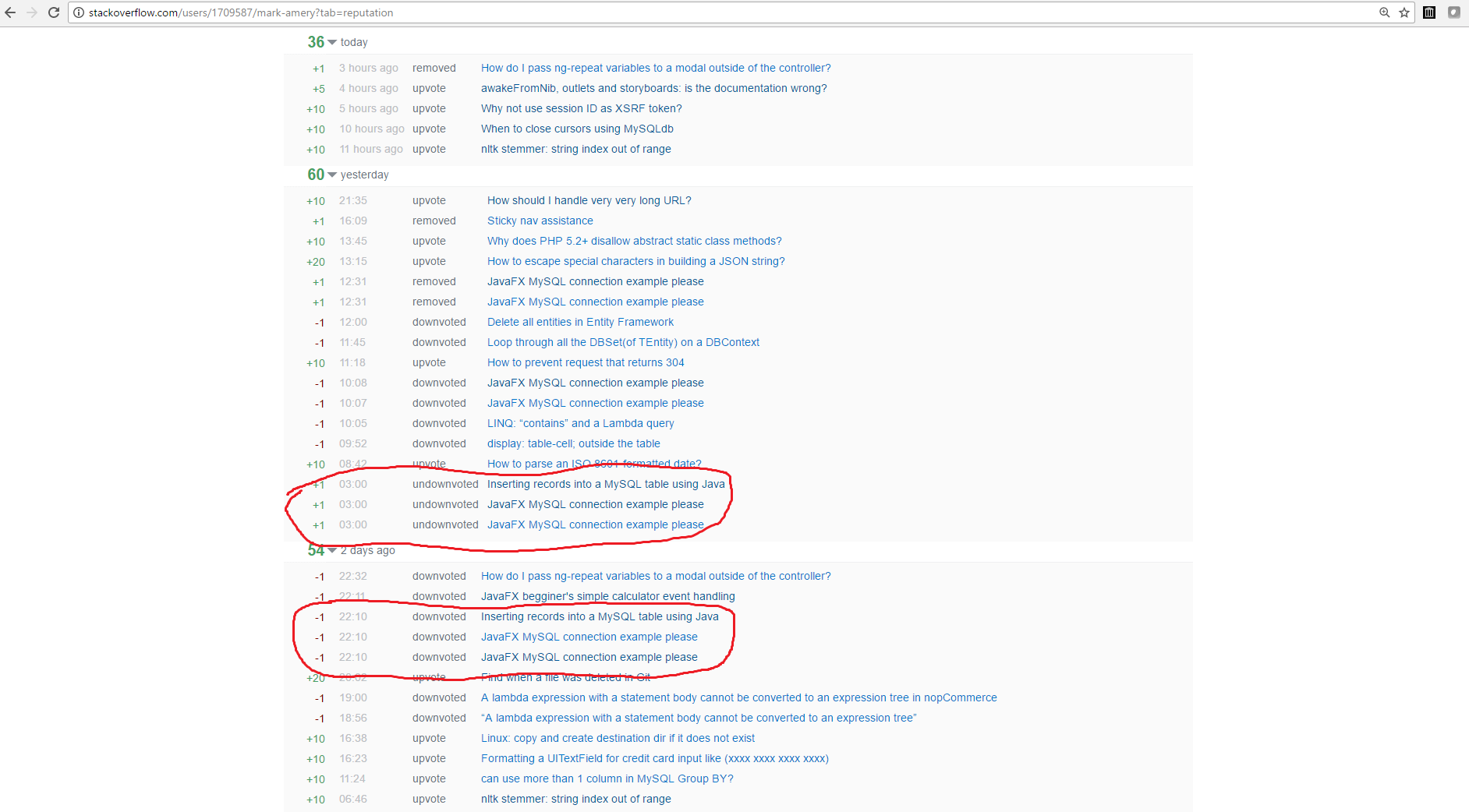 A couple of interesting observations:

Do not vote on a user, rather vote on the content. If you are voting in the normal course of a day, and voting up and down content, and just happen upon the posts, sure, it's okay. But if you are only downvoting because they posted one bad thing, and looking through their other posts, this is not okay. Vote as you would in any other regard, downvote bad stuff and upvote good stuff. However, don't target a user with only (or practically only) one type of votes. You also shouldn't be visiting a person's profile just because they posted that bad post to look for things to downvote, rather, go about your day, and if you see a bad or good post, vote in that way for it. In regard to your question, see this from the Serial Voting FAQ:

Currently, serial voting reversals only reverse the votes. You can see what happened by viewing your reputation history, but that is about the extent of what the script does. There is no automated ban for users who engage in serial voting, nor do those users receive any form of notification that their votes were reversed.

What you're doing isn't necessarily disallowed (AFAIK), as long as you're voting on the post, not the user. However, I'd refrain from doing that in the future, don't go out of your way to downvote a single user, or upvote for that matter. The script will be pretty likely to catch on to some sneaky behavior like that if you repeatedly down-vote a person, but the exact algorithm isn't known to many people, because if it were, people would just get as close to the limit as they could without exceeding it

I don't think you are explicitly notified if your votes have been reversed, and no action will be taken against you unless you have a history of doing it. However, you'll be able to see in your vote history if you care to look, as well as in the user's rep history, which will say "serial voting reversed". However, you may be contacted by a mod for this

Not the answer you're looking for? Browse other questions tagged support down-votes serial-voting .

573
What is serial voting and how does it affect me?
183
What can I do if I'm the victim of serial downvoting?
58
Fix serial downvoting reversal to not apply to users spamming site front page with bad answers
2
Is it acceptable to look for bad questions in user profile (and do some actions)?

340
Why do you lose reputation for downvoting answers?
810
What are the badges I can earn on each site, and what are the exact criteria for earning each badge?
17
Serial Downvoting Reversed with +4 bonus point
102
Please hide “serial upvoting reversed” entries in the public reputation history
10
Serial downvotes not being reversed?
80
Undetectable MICRO Serial Downvoting. What is it? What to do? What the heck!