Who awarded bounty to this question

I came upon this answer with bounty awarded which I found little weird since I cannot see who awarded the bounty. 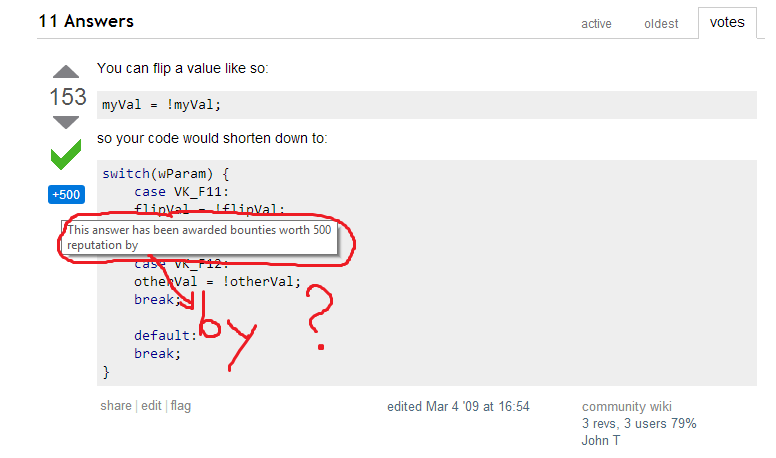 From the screenshot above, there is no reference to who awarded them.. I have read how bounty system works. And few things I can deduce from that..

The only thing I can guess is that maybe the user who awarded the bounty got deleted, but even in this case I would I expected "This answer has been awarded bounties worth 500 reputation by userXXXXXX" i.e. with his unique id.

support bounties
share|improve this question
edited May 23 '17 at 12:36

There was indeed a +500 bounty on the question that was awarded to that answer, but later was canceled due to gaming the system (sock puppet account) and back then it did not leave any trace in the question or answer revisions.

To understand how and why it happened, read this other answer. It becomes clear now that at first, the answer was written by a new user (not the question author) but then they found out it's the same user, and the accounts were merged.

Not sure who canceled the bounty, maybe it was even manual work of a dev, but it doesn't really matter: the bounty is no more, and these days dev's won't do such a thing so we'll have all the events recorded in the post revisions. (in case of such merge today, the bounty will be nullified to +0)

Not the answer you're looking for? Browse other questions tagged support bounties .

544
How does the bounty system work?
2
What could cause this massive drop in reputation?

544
How does the bounty system work?
42
I just awarded myself a bounty
755
What are the badges I can earn on each site, and what are the exact criteria for earning each badge?
5
Can bounties be awarded multiple times by the same person on the same question?
42
Bounty not awarded after the end of the grace period?
137
Explicit “do not award bounty” button
15
Full bounty incorrectly awarded
2219
Firing mods and forced relicensing: is Stack Exchange still interested in cooperating with the community?