Shog9 commented on his answer explaining the new close reasons, when asked for more clarity:

I will answer a separate question on this topic with a mapping of specific examples of questions to close reasons though. After I eat breakfast. If someone asks one.

So here is that question.

I noticed that the "minimal understanding" close reason is gone. Skimming through the discussion there, it seems like there's some confusion about how the various close reasons should be used (at least, it was confusing to me, because I always thought of "minimal understanding" as being similar to "too localized," but it seems to have been rolled into "too broad" now).

Can we make some kind of an easy-to-reference cheat sheet for each close reason with examples?

And just to clarify, "minimal understanding" been rolled into "too broad," correct?

Here is an attempt at a flow chart discussed in chat here: 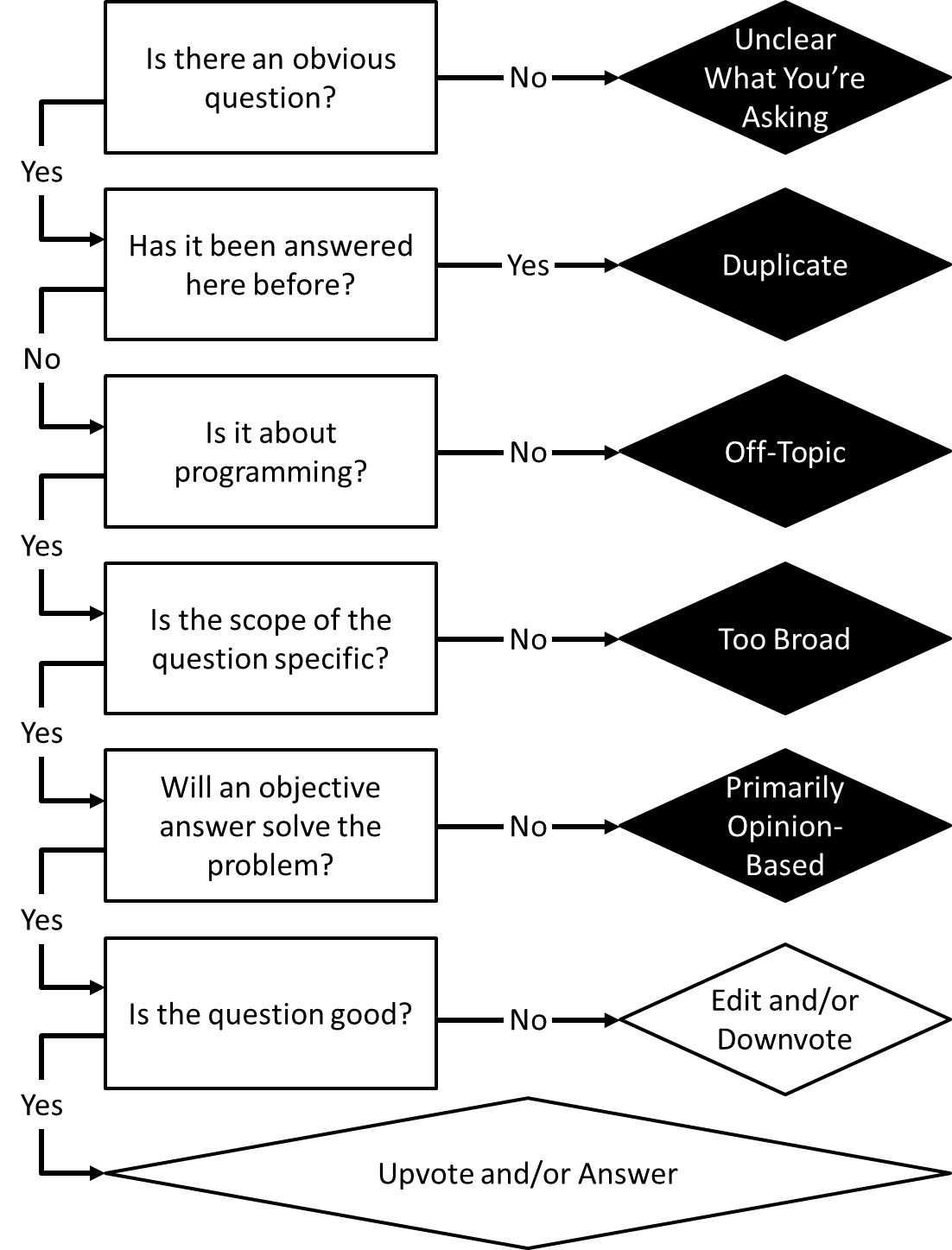 I'll give you examples. I'll talk about the problems in those examples. But I won't classify them beyond the close reason itself: doing so leads to something akin to a hash collision - multiple distinct problems getting lumped into common category, with unhelpful results. Worse, it implies that you can skip identifying a problem entirely, and apply close reasons based purely on a superficial examination of a question - while this is often feasible, doing so in every case leads to cases where useful questions are closed based on irrelevant factors rather than the presence of actual problems on the site.

This is fairly obvious: a question asks for a solution to the same problem as a different question.

A is a duplicate of B

unclear what you're asking

Exactly what it says on the tin: it is not clear from the question what information the asker needs in order to solve his problem.

Note that many "unclear" questions are still questions - and they may even be answerable, if the answerer is willing to make sufficient assumptions regarding the problem. Answerers who are gamblers or psychics have a distinct advantage when it comes to answering these questions - and if such a question attracts a skilled answer from such a lucky / clairvoyant answerer, it may well be worth editing it to reflect the answer rather than closing it. The vast majority of these questions do not attract such answers, however.

Answers on Stack Overflow are limited to a paltry 30,000 characters. That's barely enough for a brief academic paper; a comprehensive tutorial on a subject of any size is unlikely to fit, and even a svelte book on any programming topic is right out.

In practice, very few answerers have the patience to write even that much. This is fine; there are other sites that cater to full-length articles. We're here to answer specific questions.

But some questions aren't specific. Some questions just lead to more questions. Others explicitly contain multiple, independent questions! A common motivation is an asker with a fairly basic understanding of a topic who wishes to leapfrog past the whole "study, trial and error" page and find that mythical Royal Road to programming. These are discouraged - rather someone ask multiple questions (or read the answers to existing ones), building their knowledge from the foundations up than require a personal tutor to walk them through the process.

You know what they say about opinions... There are a bunch of questions that are either designed or destined to collect raw opinions, devoid of anything verifiable. Sometimes, these are a lot of fun; other times, they're fertile ground for flame-wars.

These are supposed to be self-explanatory - hence the recent removal of a couple of oft-misinterpreted ones; if it's helpful, I can provide examples for them too though. The newest off-topic reason is:

...and it's aimed squarely at this sort of thing.

The cheat sheet is the entry in the help center that discusses closed questions.

What specifically in https://meta.stackoverflow.com/help/closed-questions is lacking?

(i.e. Rather than ask if we need a more detailed list, why not propose specific wording for one close reason - the one that is most lacking/misused/underused and build a case for why the current documentation is lacking?)

435
Should Stack Exchange in general be awarding "A"s for Effort?
185
Every "close" has its thorn: replace "close" with "on hold" for the first five days
102
Improving "demonstrate a minimal understanding" close reason
177
Shouldn't "off-topic" be only about... off-topic?
131
Close all the typo questions
10
Speculative answers discouraged through downvoting
11
How to combat psychic answers?
11
Help in picking correct close reasons with more info in the vote-to-close dialog
5
recent changes to the off-topic close reasons

117
Close vote review audit flawed - fails without casting vote
260
Closing changes: [on hold], unclear, too broad, opinion-based, off-topic reasons, bye-bye to Too Localized
88
Can we rename the off-topic close reason label on the primary screen?
4
What close reason should we use for 'I want to do X' questions?
435
Should Stack Exchange in general be awarding "A"s for Effort?