Should the repcap still apply when a post has been deleted?

2 days ago (10/1/2014)(9/1/2014) I answered assorted questions and went over the repcap(+215). After that a question I answered was deleted by Community♦ when the user was deleted (no huge objection there, the question was based on a bizarre misconception1).

However, even after the question was deleted I appear to still be repcapped at 165, is that the way the system is supposed to behave?

My understanding is that rep is not supposed to require recalcs these days; regardless I have waited 2 days to see if the problem resolves itself. I cannot currently do a manual recalc as that option has been removed as part of an unrelated bug. 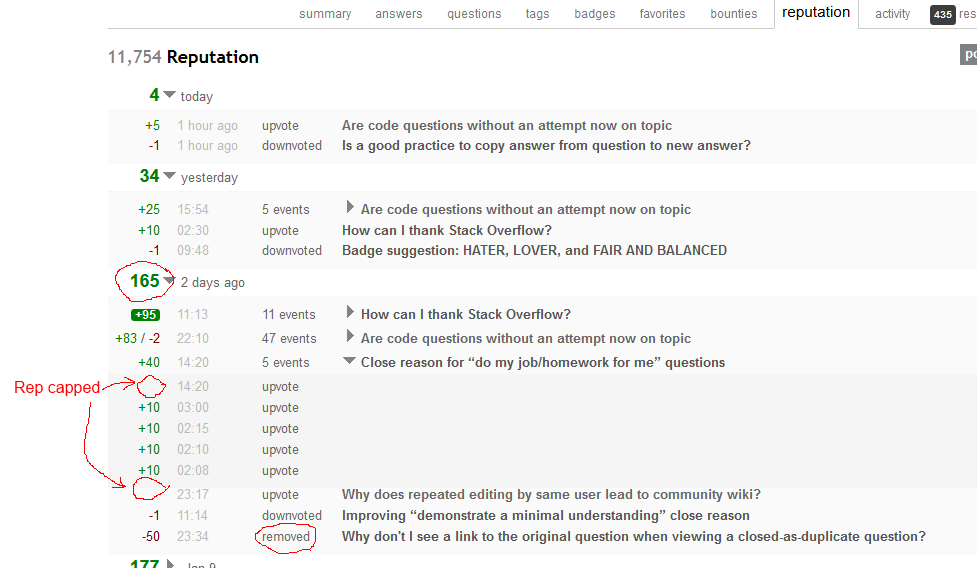 1 This whole saying 'the community user is doing a good job' thing feels very unnatural, erm, it does a terrible job of reviewing though

You were rep capped.

Since other users can't see your deleted post records, it makes it more obvious when we look at it:

You had 1 accepted answer, 120 rep from 12+ upvotes on your answers, and 81 rep from your 18+ upvotes and 1 downvote on your question, that comes to 216, which is consistent with the rep cap. And the extra "1" came from that downvote you made on a specific answer.

Not the answer you're looking for? Browse other questions tagged support reputation daily-reputation-limit .

440
How does deleting work? What can cause a post to be deleted, and what does that actually mean? What are the criteria for deletion?
6
How do questions marked community wiki AFTER you answer impact rep upon recalc
6
My question has been deleted, hasn't it?
28
Show message when rep has been recalculated
26
Bounties from deleted accounts should still be awarded; al least, the indicator should be removed
15
What does a brand-new user see when returning to the site when their first post has been deleted?
100
Has there been any discussion regarding the original stated reasons for the question up votes being set at +5 from +10 earlier?
70
Has there been an increase in suspensions on MSE lately?