Failed a close audit (what is too broad about this topic)?

I recently failed a close audit on "The operator -> in c++": https://stackoverflow.com/review/close/3800577. When the question was presented, it showed -3 votes and I thought the voting members were being a bit harsh on a new user learning C++.

In the post, the OP stated "I did not find any helpful explanation about this operator on the internet". In fact, Stack Overflow did not offer similar useful results: 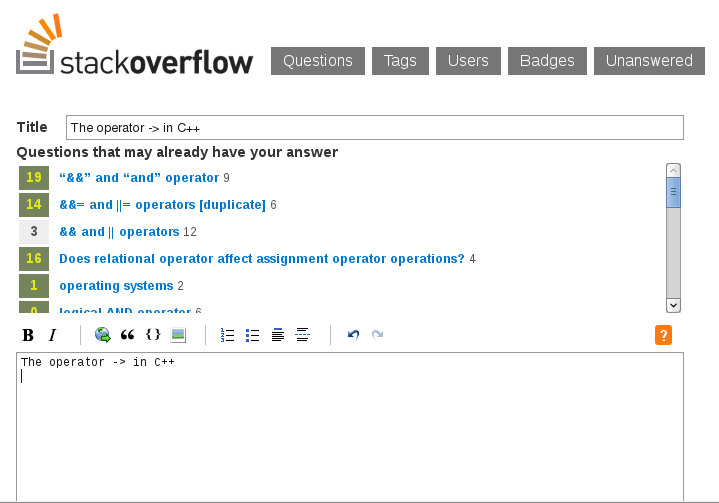 I performed the search myself, so I believe the OP was truthful when he stated he was having trouble finding information on it. I performed the two search because I suspected the question was a duplicate, and I wanted to point him to the correct post.

After the audit results, I see there are -9 votes and the question was closed because it was too broad.

I'd like to point out that "operator->" is the member access operator, and it does not seem to be very broad a topic to me. In fact, searching Google for "c++ member access operator" returned quality results, and many of the top results did a great job of explaining it in a couple of paragraphs.

Perhaps I'm taking something for granted here. Would someone explain to me what is too broad about the question and potential 1- or 2-paragraph answers?

Or is this a case of senior and voting members hunting in packs and this should apply: Could we please be a bit nicer to new users?. 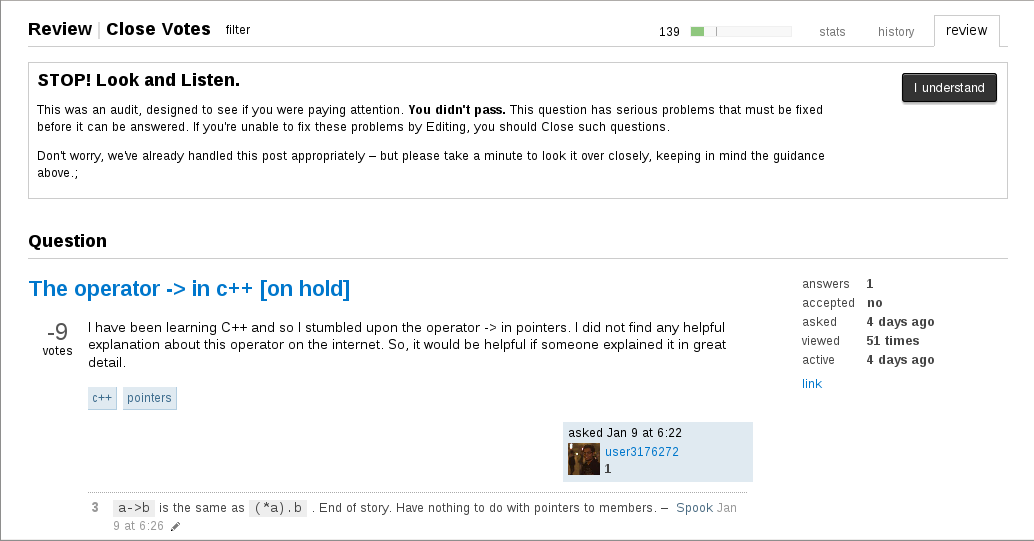 EDIT: An image of Stack Overflow's suggested questions was added to show how difficult it can be to get search results when the search term includes symbols.

Requests for detailed tutorials are Too Broad, by definition.

The problem here is the level of knowledge of the asker. The OP says he's new to C++, so any explanation of the operator would have to explain the involved language elements in detail, in order to cover all of the fundamental knowledge that would be required to understand the operator. That makes the question too broad, and more appropriate for a book or language tutorial.

At least if this were tagged as C rather than C++, @Jefffrey would theoretically be sort of right: the answer to this would be extremely narrow and simple, requiring only a one-liner as an answer.

In reality, however, any decent book on C or C++ is going to cover the -> operator and how a->b is equivalent to (*a).b, typically in its chapter on structs or classes (e.g., Chapter 6 of K&R2). That leaves only one reasonable conclusion: the OP hasn't studied or read through enough of a textbook on C or C++ to have learned its basic syntax and operators.

That being the case, to be complete enough to be meaningful, an answer would really need to start with (at least) what a struct and/or class is, and the basics of member access. Then it would have to go into pointers (or it could go into pointers first, then structs), and finally how -> relates a pointer to a member.

In other words, the answer has just expanded from one line to chapters 5 and 6 of K&R2. Worse, K&R2 is (justifiably) known for being unusually terse, so if we were looking at another book on the subject, we might easily find that material filling 100 pages or more--easily the size of many small books.

That only covers the answer for C though. The comment Jefffrey cites:

Is simply false with respect to C++. C++ adds two more dimensions to the problem: first, the claimed equivalence of operators doesn't necessarily hold true because operator-> can be overloaded. Second, overloading operator-> isn't quite like overloading other operators. The full technical details of that aren't really relevant here, but suffice it to say that just talking about the unusual characteristics of an overloaded operator-> could be (at least) sufficiently broad for a question and answer on SO. In a decent textbook it would probably be a lot less than 100 pages, but would probably fill most of a page in even a very tersely written book and might easily occupy a half dozen pages in some of the more verbosely written books.

Bottom line: an answer that's complete enough to be meaningful really is much longer than is reasonable for SO, and would basically involve reproducing a significant portion of a normal text book on C, and a smaller (but still far from insubstantial) portion of a text book on C++.

I'm gonna start this answer with a quote (from jalf) from the Lounge<C++>:

Don't you know downvotes are shorthand for expression "I know more about programming than you"?

You can easily replace or add "close votes" in there and use it in the current context.

I strongly disagree with the overall opinion of Robert Harvey and those who voted to close it.The question has been closed with the "too broad" reason, but how does:

There are either too many possible answers, or good answers would be too long for this format.

apply here? How can there be too many possible answers in "explain operator-> to me"? It's a trivial question and I'm surprised it's not a duplicate (because that's the only reason I could agree to close it on), but it's not a bad question.

An acceptable answer has been given as a comment:

How is this long? You can even add a few hint to the fact that -> is actually operator-> that can be overloaded; maybe throw in some links to some famous "operators in C++" question here on SO and be done with it.

I don't see how can't a short answer be given here.

The OP says he's new to C++, so any explanation of the operator would have to explain the involved language elements in detail, in order to cover all of the fundamental knowledge that would be required to understand the operator.

A tutorial on the operator-> seems pretty narrow. The above can apply to questions in the form of "What are operators in C++". Not to "Explain operator-> to me".

1831
Could we please be a bit nicer to new users?
18
Can a new programmer with limited technical expertise ask a quality question about fundamentals on SO?

14
How is this a failed audit?
117
Close vote review audit flawed - fails without casting vote
258
Closing changes: [on hold], unclear, too broad, opinion-based, off-topic reasons, bye-bye to Too Localized
416
Add an "I don't understand" option for review audits
1
Is it appropriate to flag comment as unconstructive when its part of a close reason?
10
Failed a questionable audit?