We will be rolling out a new, fully re-factored and redesigned login & signup pathway on Meta tomorrow morning, just missing Marc's estimate of 6-8 weeks back in October.

As many of you are aware, our current design has been around for years. To keep everything secure, we had to use iframes and redirect users to openID.stackexchange.com during parts of our sign-up process.

We've known for quite a while where we wanted to take the design, but we were waiting on SSL functionality to make it work.

What you'll find in the new version:

We hope this new design will be easier and less confusing for new users and quicker for existing users.

Since this is a full refactor, it's likely we've missed some edge cases during internal testing. We would be very appreciative if you guys could kick the tires a little and let us know if something doesn't look right.

Please post requests and bug reports in this thread until we rollout network wide.

The new login and signup pages have now been rolled out on Meta - do your worst!

Trying to sign up with an email that's already registered fails with a useless error:

Note that on openid.stackexchange.com, trying to register an already-registered email address tells you this explicitly:

I would expect at least the same behavior from the integrated signup.

It would be nice if the distinction between the Google accounts and Google profile accounts (in the second tier of options) could be clarified.

I was also disappointed to see the Yahoo! option demoted to the "More login options" tier. It now occupies the space once held by myOpenID. I hope that's not an omen.

On /users/login when selecting the Stack Exchange login leaving username and password empty and click on login the message 'email cannot be empty' appears which is good. Not good is the closing of the dialog ending up in this UX: 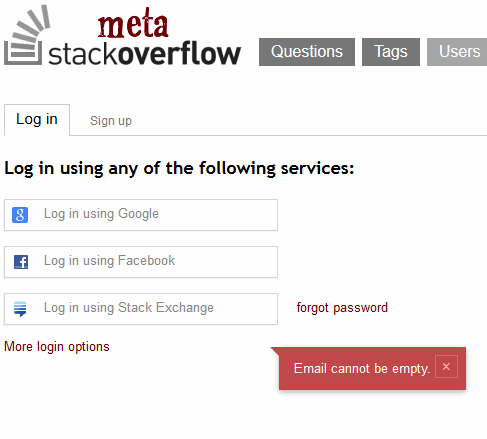 Can the dialog stay open when an error message is shown?

This behavior is observed in Firefox 26.0 (on win7 x64) and NOT observed in Chrome or IE.

So this might predate the rest of the login changes, as I can reproduce it on the main site as well; I haven't tried recovering my account in a while though, so I can't say for sure. The email that the account recovery service sends is missing rather a lot of credentials...

There are a couple of problems here:

Now, in practice this may not matter, since the Stack Exchange account is listed and presumably would always work. But if that wasn't there, this would be a really useless email... So for testing purposes, I removed this credential from my account and generated the recovery email again using my Google email:

Lo and behold, a third option suddenly appears. Not the option that actually corresponds to the email I entered, but a third option none the less. Of course, in this scenario I very likely would care to know that I could log in using Google, since that's what I've done in the past - but there's no mention of this. Also, there's still no mention of what to do with the (now two) unidentified OpenID credentials.

I also did a third test using the email in my profile (which doesn't correspond to any of my credentials) - it appeared the same as the second test above, which would be particularly frustrating if I didn't already know I had a Google login associated with the account and wasn't able to guess at it.

The fourth test - re-adding the SE OpenID and triggering another email - didn't change anything either.

I should note that all of these emails do have a handy link that offers to quickly log me in and create an associated SE OpenID without any further issues. That probably mitigates a lot of the potential problems here, since even folks who can't remember (or determine from the email) which service they used to create the account can still regain access by creating a SE OpenID. It would be rather annoying for folks who don't like having a separate login on every site they use though.

Internet Explorer 10 Any major browser and a Stack Exchange OpenID.

Find your profile on https://openid.stackexchange.com, press Use your own URL to log in, extract the ID url (it's the href of the second <link> tag), then paste that into the "Use your own URL" box on the login page. You are now logged in.

After finding the log out button again, I took this screenshot. Those two asterisks are for the username and password to log in with Stack Exchange. I suspect that I'm seeing this due to the firewall I'm behind at work, as it messes with the Google AJAX servers when using Firefox (Stack Exchange is all but unusable with Firefox at work). 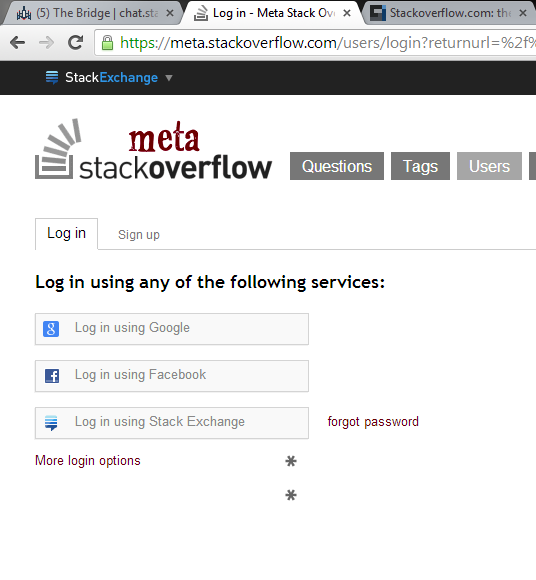 Right now, I‘m on a pretty old computer with an Iceweasel 3.5 (should be fully equivalent to Firefox 3.5). I could log in on SO correctly, but the login wasn‘t carried over to Meta. So on Meta, I had to log in again. But when I clicked the “Log in using Google” button, nothing happened.

I had to open the additional login options and enter the Google OpenID URL manually for it to work. I assume that the button didn‘t register the event handler well enough for this old browser?

If i am not logged-in and i want to up-vote an answer (for example), i am redirected to login page for the log-in process, BUT after the logging-in process:

Expected result: After the login process i expect that i would be redirected to my original page so i could continue from the same place.

Actual Result: I am being redirected to the main question page, i have to do a couple of "back"s in browser and refresh to find the page i was in and continue my work.

Not the answer you're looking for? Browse other questions tagged discussion login openid announcements .

276
How can I delete my account?
39
Why is the HandleSuccess method such a terrible one?
65
Log out button illogical placement
14
Why is my StackExchange OpenID so hard to find?
12
Are feature tryouts practical on Stack Overflow?
13
Fix "login" to verb "log in" on question pages
12
Can't login with Stack Exchange username and password
2
Is Stack Overflow's (SSL) log-in process optimal from a UX perspective?
7
Suggestion: use type="url" on the openid URL input field
1
better error message for "Illegal email address"
See more linked questions

1154
Are there any clones/alternatives for running a Stack Exchange style Q&A site?
539
Recent Reputation History Changes
531
Global auth is dead! Long live universal login
422
Can a machine be taught to flag spam automatically?
461
Network-wide HTTPS: It's time
380
Updating the Hot Network Questions List - now with a bit more network and a little less "hotness"!
2507
Firing mods and forced relicensing: is Stack Exchange still interested in cooperating with the community?
554
The company’s commitment to rebuilding the relationship with you, our community
414
Swag is coming back! (temporarily paused)