Off-topic close reason only for answered questions? Should I answer?

One of the off-topic close reasons currently reads as follows:

Especially the "this one was solved in a manner" part makes me think, that this reason is only meant for questions that had an answer. However, there are quite some questions that make me want to use exactly this reason. It is clear that we don't have enough information to exactly reproduce this, yet it is rather clear what the questioner is asking about, and answering one or more concrete questions (that you can then often find in the comments) would be necessary to solve this.

So when we see such a question, wouldn't this be appropriate to use for closing, even if no answer was given yet? Or should I answer, and then close, so that "was answered" applies? Not having a concrete example at hand probably makes it hard to reason about this, but I would not like to close them as "unclear what you are asking", since they are not really unclear, they are just missing the last bit.

Even more so this is for the "simple typographical error" part, where it's often immediately visible that e.g. a semicolon is missing here or there. Should we have to answer this question before closing it?

It's probably easier to just give you an example: 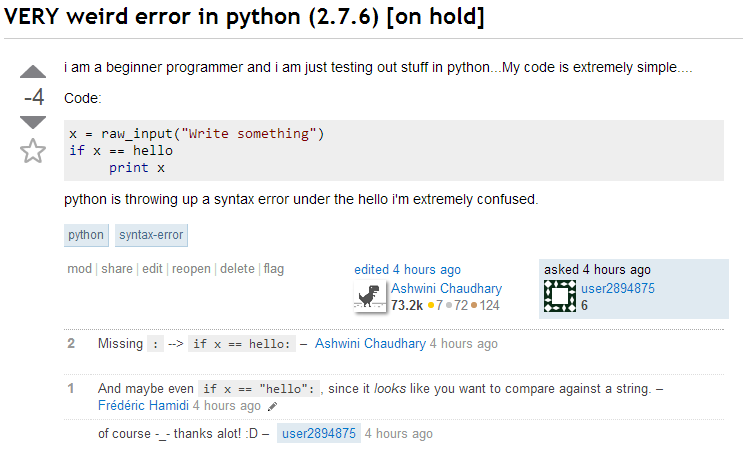 It's possible that someone might have a question on a specific Python syntax error that would be useful to others, but in this case the problem was a simple mistake that was quickly pointed out. In some cases, these questions might have answers, but often they do not; the close reason merely expects that the problem has been identified and resolved.

Here's another example, this time with an answer: note that the problem here had nothing to do with the code and everything to do with a stale browser cache. Again, problem is resolved, but very unlikely to be useful to others in the future, even if they're observing similar symptoms.

Since this was confusing to many people, I've tweaked the wording to this reason slightly:

This question was caused by a problem that can no longer be reproduced or a simple typographical error. While similar questions may be on-topic here, this one was resolved in a manner unlikely to help future readers. This can often be avoided by identifying and closely inspecting the shortest program necessary to reproduce the problem before posting.

Not the answer you're looking for? Browse other questions tagged discussion close-reasons off-topic .

637
Are answers that just contain links elsewhere really "good answers"?
258
Closing changes: [on hold], unclear, too broad, opinion-based, off-topic reasons, bye-bye to Too Localized
178
Shouldn't "off-topic" be only about... off-topic?
91
Categories other than "off-topic" should allow custom close reasons
435
Should Stack Exchange in general be awarding "A"s for Effort?
6
Since "Too localized" is gone, what reason should be used when closing debug-my-code questions?
718
Your answer is in another castle: when is an answer not an answer?
2482
Firing mods and forced relicensing: is Stack Exchange still interested in cooperating with the community?